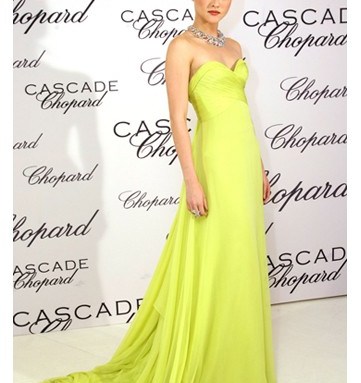 In Hollywood, you’re only as good as your next project, and the same goes for Cannes this week. At the Hotel du Cap-Eden-Roc, where Chopard held its Belle de Nuit party Wednesday — the first of many late-night bashes over the next several days — actors talked up the films they’re in town to promote and the ones they might be here for next year.

French actress Emma de Caunes discussed her upcoming role as Kiki de Montparnasse in a Man Ray biopic, due to start filming this fall. “She was a strong figure in the Twenties, an artists’ muse,” de Caunes said. Giovanni Ribisi is set to play Man Ray, and Christina Ricci also is reported to have signed on.

Fledgling Italian actress Alessia Piovan chatted about her part in the upcoming musical “Nine,” which stars Nicole Kidman, Kate Hudson, Marion Cotillard and Penélope Cruz. “I play an actress who comes for an audition with Daniel Day-Lewis’ character,” Piovan said, sipping pink Champagne. “Working with him was pretty huge.”

Ehrenreich plays Bennie in Francis Ford Coppola’s hyped drama “Tetro,” which opens the film festival’s Directors’ Fortnight section. “During rehearsals, [Coppola] threw a costume party where we had to wear something that our character would wear and remain in character,” said Ehrenreich.

Roman Coppola said he’ll be working on the production of his sister Sofia Coppola’s next movie, to be filmed in Los Angeles.

Meanwhile, Devon Aoki got some fresh air on the balcony. She’s working on opening an organic restaurant in Los Angeles and is also recording an album with her brother, DJ and producer Steve Aoki. Perhaps under the guise that practice makes perfect, the model-turned-musician demonstrated a few exercises for strengthening the vocal chords. “This one’s excellent,” she said, daintily blowing a raspberry.