Canteen Succumbs to Lure of the Sea

NEW YORK — The restaurant Canteen will best be remembered for two things: its miniature doughnuts served with a cup of hot chocolate sauce for dipping and its orange padded chairs.

As far as New York restaurants go, Canteen had a good run... 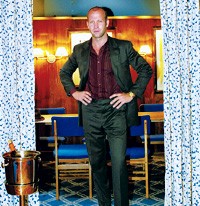 NEW YORK — The restaurant Canteen will best be remembered for two things: its miniature doughnuts served with a cup of hot chocolate sauce for dipping and its orange padded chairs.

As far as New York restaurants go, Canteen had a good run in its five-year existence, outlasting the Guggenheim’s SoHo museum in the same building and predating the Prada store that now sits above it on a block of Prince Street from Broadway to Mercer Street. While the food was enjoyably accessible, where Canteen really made its mark was in design — its bare walls and cantilevered banquettes by Marc Newson all but ushered in an era of sleek and modernistic “designed” dining environments.

Now the orange chairs are packed away in storage and every square inch of the former Canteen has been swabbed clean to make way for a new restaurant — the Lure Fishbar — by the same owners, John McDonald and Josh Pickard, the dining duo also behind Lever House. Instead of sci-fi chic, however, the new restaurant is designed to look like the inside of a 1940s luxury yacht, with walls covered in teak board and baton, windows framed with portholes and dining room tables a mix of glossy wood slabs that evoke an upscale Long John Silver’s.

“Canteen needed to be reinvented,” McDonald said. “It had been copied and knocked off in several versions, and after Lever House I needed to do something different.”

Perhaps it was time for a change, as the modernist aesthetic of Canteen had reached its apex with the opening last year of Lever House, where Newson was given carte blanche to design the restaurant as if it were a sculpture, with an ambition to the permanence of the iconic dining room of the Four Seasons. As a contrast to that look, McDonald and Pickard wanted to recall a specific moment of the 1940s at Lure — think the Onassis or Agnelli clans —?and instead turned to interior designer Serge Becker of Bowery Bar and Joe’s Pub fame.

“It is meant to have a sense of time and place,” said McDonald, adding that it’s the origins of Lure’s menu — based in seafood — that’s tougher to pin down. The sashimi and wasabi cocktail sauce say Japanese, but the lobster roll and clam chowder claim New England fish house.

“Because of the fish concept, it needed a tie to the design,” McDonald said. “But nothing so obvious as a captain’s wheel or netting on the walls. We’ve interpreted that into a stylish old yacht. We weren’t trying to create a work of art here, we were trying to create a boat.”