The hottest ticket this summer isn’t a trip to Saint-Tropez, Capri, the Greek islands or the Hamptons — it’s the 2010 FIFA World Cup in South Africa. 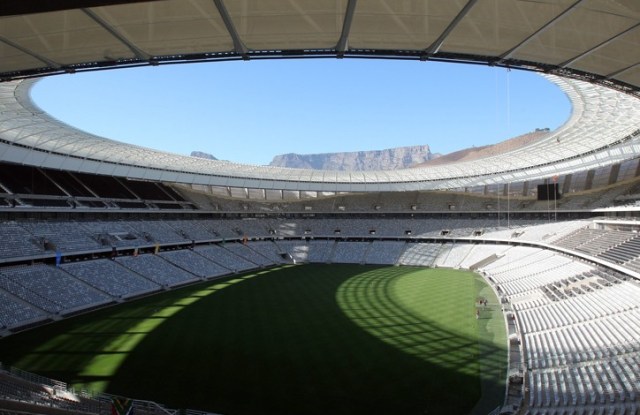 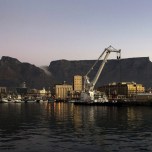 CAPE TOWN — The hottest ticket this summer isn’t a trip to Saint-Tropez, Capri, the Greek islands or the Hamptons — it’s the 2010 FIFA World Cup in South Africa, which kicks off on June 11.

One of the biggest events in international sports, the World Cup takes place every four years, with millions of devoted football (also known as soccer) fans around the world following every game during the five-week tournament. It is said the World Cup is even bigger and more popular than the Olympics. This is the first time in the cup’s 70-year history that it will take place on African soil, and the football frenzy is definitely reaching fever pitch in South Africa.

Though the opening and closing ceremonies will take place in Johannesburg’s impressive new stadium, Soccer City, Cape Town also will see some action.

On Cape Town’s streets, the vuvuzela, a native South African trumpet, blares in low but sharp-toned triumph, while the national flag and those of the 31 other participating countries gaily festoon cars and buses. On casual Fridays in this most casual of nations, everyone, from shop assistants and students to office workers and chief executive officers, is encouraged to wear football-inspired gear, preferably the bright yellow-and-green T-shirt that is the uniform of the national team, fondly nicknamed “Bafana Bafana.”

Even Nike, Adidas and Puma have gotten in on the action. Adidas created a giant Bafana Bafana jersey that is touring the country, collecting signatures scrawled on the T-shirt itself.

Nike launched the “Bleed Your Colours” campaign, teaming up with renowned South African designer and illustrator Kronk to create a crest and a mascot that would be colorful insignia and a two-headed mascot, representing both fan and footballer.

And Puma unveiled a collaboration with Kehinde Wiley, one of the world’s most sought-after urban artists, to create its 2010 Puma Lifestyle Africa collection. Seven of Wiley’s boldly patterned and wildly colored graphic motifs appear in the collection of apparel, footwear and accessories. In addition, Puma commissioned Wiley to create original works of art inspired by three of football’s biggest stars — all African: Cameroon’s Samuel Eto’o, Ghana’s John Mensah and Ivory Coast’s Emmanuel Eboue. The artworks are part of a global art tour that commenced in Paris this year and culminates in Cape Town, at the Studio One Gallery on Bree Street, just in time for the World Cup.

In between matches and training sessions, Eto’o himself might be spotted on Cape Town’s streets, along the Waterfront or hanging out in the seaside cafes and bars on the Camps Bay promenade. In fact, there should be plenty of famous players for fans to see, including Cristiano Ronaldo, David Beckham, Gianluigi Buffon and Thierry Henry, as Portugal, England, Italy and France are all scheduled to play first-round matches in Cape Town, in the newly rebuilt 68,000-seat stadium in Green Point.

The stadium is only one of several ambitious building projects the city of Cape Town has undertaken in preparation for the World Cup. Recently, the scaffolding was lifted off the revamped Cape Town International Airport, and the result is a dramatic, modern and glamorous edifice whose roof slopes, dips and curves to echo the wings of an airplane.

Indeed, the new Cape Town is sexy and glamorous, and the so-called “Platinum Mile” extension in the V&A Waterfront shopping complex is proof of that. Completed toward the end of 2007, the Platinum Mile was built with the intention of luring luxury labels to the massive mall. While most of the labels were opening their second South African boutiques after Johannesburg, some, such as Jimmy Choo, Burberry and Gerard Darel, have chosen to bypass the bigger city in favor of Cape Town for their South African debuts.

“Cape Town is fast becoming one of the most cosmopolitan cities in the world,” stated Tamara Mellon, founder of Jimmy Choo, upon the opening of the brand’s 800-square-foot store two years ago. “It is an exciting new market with a genuine demand for luxury.”

Ceo Angela Ahrendts said, “One of our key company strategies is to accelerate retail-led growth on a global basis. We recognize the potential in the South African market with both local luxury fashion consumers as well as a flourishing tourist market and anticipate further expansion in South Africa.”

Matt Morley, commercial director of the Southern Africa Luxury Association, pointed out that “Cape Town is more about positioning, really. The market is seasonal — the summer months are December to March, when mainly Northern and Western Europeans make their way down to Cape Town to enjoy the glorious sunshine when it’s winter back home.”

It was important for luxury brands to get a foothold into the market for many reasons, he added. “Luxury brands need to have a presence in this market in order to cater to these well-heeled tourists, as well as to build brand awareness for the future, when the South African middle class does rise up. It’s got to be a long-term vision,” he said.

Apart from Louis Vuitton and Burberry, the branded luxury boutiques such as Gucci, Jimmy Choo, Paul Smith and Gerard Darel along the Platinum Mile are all franchises. “The luxury houses are still being cautious, and understandably so. It’s a new market, and as with all emerging markets, there are enormous risks and enormous rewards,” he said.

According to a report on the luxury market released by SALA late last year, South Africa very well could be “a new frontier for luxury.” The glaring economic disparity among the classes notwithstanding, Piers Schmidt, chairman of SALA, said the country has “one of the fastest-growing emerging middle classes in the world.” He cited the World Wealth Report published by Merrill Lynch and Capgemini in July, which stated, “South Africa is home to nearly 51,000 dollar millionaires and they represent more than 50 percent of all the millionaires in Africa.”

The luxury retail sector may still be in the stages of infancy, but luxury hotels and restaurants are booming. In the Cape Winelands alone, from Franschhoek to Stellenbosch to Constantia, one can reel from hotel to vineyard to restaurant fully sated with great wines and exceptional cuisine.

And every month, it seems, a new hotel flings its doors open, from boutique hotels like Ellerman House and The Dockhouse to the new Taj in downtown Cape Town in the renovated headquarters of the African Reserve Bank and Temple Chambers and the Adam Tihany-designed One&Only Cape Town, which features the only Nobu restaurant on the continent, not to mention Gordon Ramsay’s Maze. And the spa is set on its own island.

“The spa scene in Cape Town is truly extraordinary,” remarked French hotelier Gerard Sintes. “The quality of spa treatments on offer and the service delivery is excellent, particularly at the high end of the market.

“With the World Cup, more and more people will be sampling what Cape Town has to offer,” he said. For many of the estimated 350,000 visitors coming, Cape Town will be their point of entry and departure. “And it has the advantage over Johannesburg as being perceived to be safer in terms of security,” added Sintes.

As Sepp Blatter, the president of FIFA, the football world’s governing body, said, addressing security concerns — South Africa is plagued by alarming rates of violent crime, including murder and rape: “Security is a matter for the government, and we have received adequate guarantees in this regard, so there is no reason to have any doubts. The FIFA World Cup is about enjoyment, and I am convinced we will have a wonderful festival in South Africa.”

David and Victoria Beckham seem to agree. Though the soccer star will not join his English teammates on the field due to an injury to his Achilles tendon that will keep him out of action for six months, the Beckhams definitely will be in South Africa for the tournament. After all, the two have reportedly bought and furnished their own Cape Town pad, just in time for the World Cup.