The Nineties-themed show in Florence on June 13 will mark the retailer's 90th anniversary and the launch of CR Runway.

PARIS — Carine Roitfeld is joining forces with LuisaViaRoma for a blockbuster fashion show in Florence on June 13, marking the multibrand store’s 90th anniversary and the launch of CR Runway, a new format of fashion show that aims to unite top designers and models under one umbrella.

The fashion editor and founder of CR Fashion Book magazine will curate 90 fall looks for women and men for the Nineties-themed show, scheduled to coincide with the Pitti Uomo trade show. The evening will also feature a closing performance by Lenny Kravitz followed by a private dinner.

“Karl Lagerfeld used to say, ‘Do something that’s never been done before.’ So I am always following Karl,” Roitfeld told WWD in a joint interview with Andrea Panconesi, chief executive officer of LuisaViaRoma, at the Café de Flore in Paris. “It will be a huge show. We’re thinking big.”

Indeed, the scale of the project is unprecedented: 5,000 seated guests are expected to attend the outdoor event on the Piazzale Michelangelo, and screens will live-stream the action across the city. A number of featured looks will be available on a dedicated CR Runway microsite on LuisaViaRoma’s e-commerce site.

Panconesi declined to provide a budget for the show, but gave a glimpse into the logistics: The retailer has booked almost 500 hotel rooms in the city, and the square will be shut down for one week while 180 people work to build the set.

“It’s the very first time that you put all these designers together in such a big production, which is so good because that’s the very essence of a multibrand store like ours,” he said.

“It’s not an easy thing. That’s why it’s never been done, but that’s why we are challenged. We like to do things that are not easy and that have never been done before. Otherwise, I’m not interested,” added the Italian entrepreneur, who grew his family-owned store into a global luxury e-tailer that sells in 180 countries. 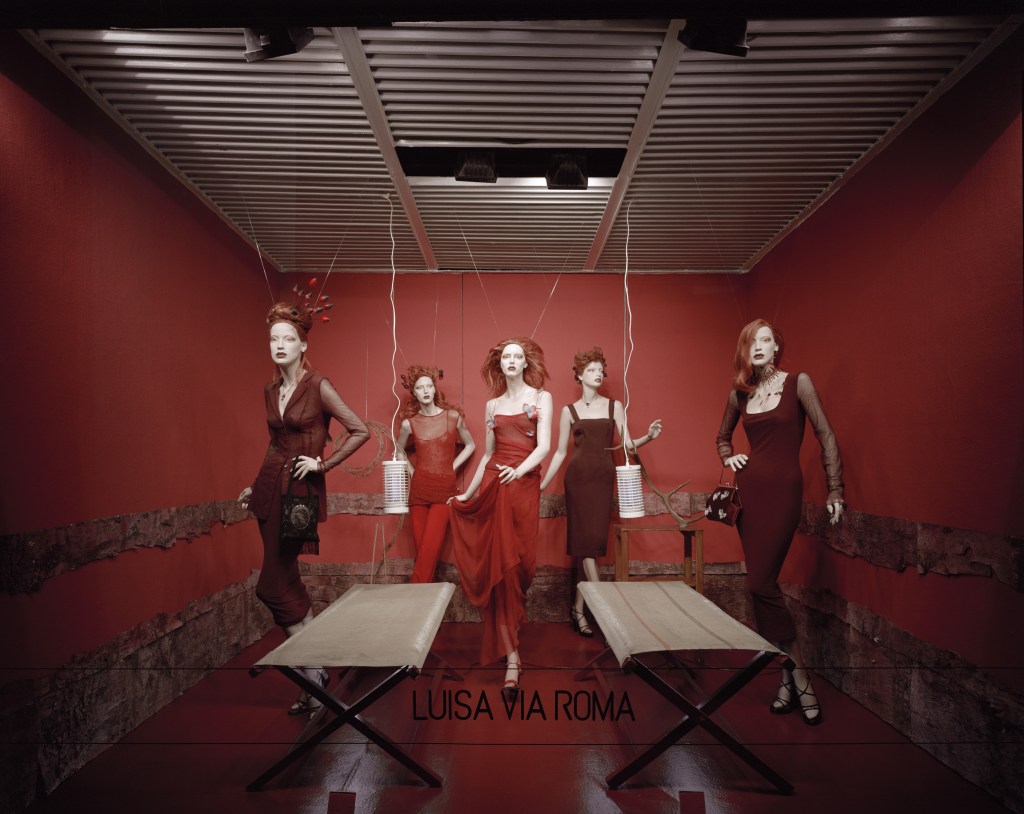 A 1998 window display at LuisaViaRoma.  Courtesy

Roitfeld is leveraging her decades-long relationships with designers and models to assemble the event, the first under the CR Runway banner, and it is proving considerably more challenging than the charity runway shows she has organized for amfAR’s annual Cinema Against AIDS gala in Cannes since 2012.

“Designers sometimes don’t like to share their outfit on the same runway as other designers. It’s normal. They want people to recognize their outfit. It’s the reason why each time a model will be on the runway, there will be a screen with the name of the outfit she is wearing. We’re going to make a sort of look book,” she added.

Roitfeld said she has held scores of face-to-face meetings with the ceo’s of major luxury brands to explain the project, but it was even more crucial to get designers on board.

“It’s good that we get the feedback from the designers because I’ve known them for 30 years,” she said. “So it’s very important for me in the show that they feel relaxed and happy. Some of course will say no, because some don’t want to share [the stage.] It will happen, but I will not take it personally. But we already have a long list.”

Among the models she hopes will take part are veterans like Eva Herzigova, Karen Elson, Mariacarla Boscono and Guinevere van Seenus, alongside more recent stars such as Gigi and Bella Hadid. Piergiorgio Del Moro will cast the show, produced by Andy Boose and Stefan Santoni, while Michel Gaubert will create the soundtrack.

“It will be dedicated to the Nineties, but not in a nostalgic way. We’re not here to cry about when we were young,” she said. The show is the brainchild of her son, Vladimir Restoin-Roitfeld, president and managing director of CR Fashion Book, who said he hopes to make it a regular event.

“I don’t know if it’s going to be a yearly project. I don’t want to put too much pressure on us, because it was already so hard to arrive where we are today, and we’re very thankful to be doing this with Andrea and his team because it is a big project. It’s a very expensive project, it takes a lot of team effort,” he said.

It comes as Roitfeld is reducing her role at the magazine to focus on other initiatives, including her role as style adviser to Lagerfeld’s namesake fashion label, and the launch in May of her perfume collection, which Restoin-Roitfeld hopes to expand into other beauty offerings. “We have a lot of projects. We’re still doing the magazine, but we have to evolve,” she said.

LuisaViaRoma is no stranger to events, having launched its biannual Firenze4Ever platform in 2010 as a meeting place for brands, bloggers, media and influencers. Panconesi said it would be handing out 1,600 tickets for the anniversary show to members of the public through an online contest.

The retailer is targeting revenues of 160 million euros in 2019, up from 130 million euros in 2018. Of that, 95 percent is generated online, but Panconesi is keen to maintain roots in the physical world, with plans to open a new retail location by December on Piazza d’Azeglio, a residential area in Florence.

“I’m not thinking to make money. It’s a huge place, it’s 2,000 square meters. It will have a restaurant, it will have a beauty treatment salon for young people. I want it to become a place where people can gather, for the local people,” he said, adding that he hopes visitors will drop their phones and have face-to-face conversations. 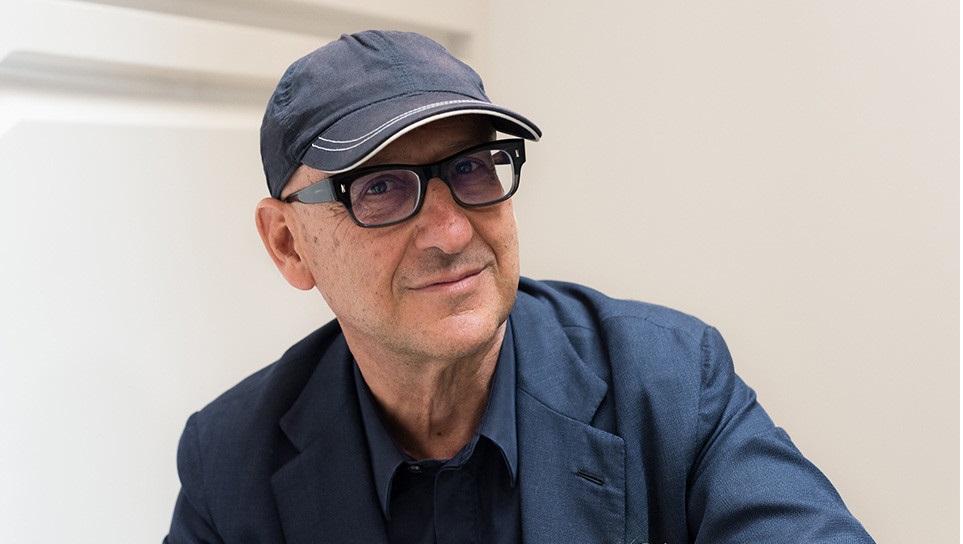 He is a strong believer in the future of multibrand retailing, despite the difficulties faced by independent boutiques and department stores.

“There’s nothing wrong with each brand wanting to have their own identity. It’s fine, but I think if the multibrand activity dies, the young designers won’t have any place to showcase their collection,” Panconesi noted. “If young designers die, there is no fashion and no future.”

He said the 90th anniversary runway show was a tribute to his hometown, which he described as the birthplace of the modern ready-to-wear industry.

“The very first time a modern fashion show was conceived, it was in the white hall at Palazzo Pitti by [Giovanni Battista] Georgini, who invited for the first time the ceo’s of the big American department stores to show the little brands,” he recalled.

He noted the LuisaViaRoma show will be held at dusk on the square, which has a sweeping panoramic view of the Arno river and the Florence skyline. “Imagine with these beautiful models, a beautiful set and Florence underneath, and the sunset on the river. It’s magic,” he said.

Roitfeld said the ambition of CR Runway was born from Yves Saint Laurent’s historic runway show at the Stade de France during the 1998 soccer World Cup. She is also feeding off her own memories of modeling in some of Kenzo’s exuberant fashion shows in Paris.

“We have to make something people never forget, a dream, and on top of that, they want to buy the clothes,” Roitfeld added, comparing it to shooting the new season’s collections for a magazine. “It’s huge to think about. Sometimes, you’re almost frightened by the scale of the project. Sometimes, my heart is beating fast.”