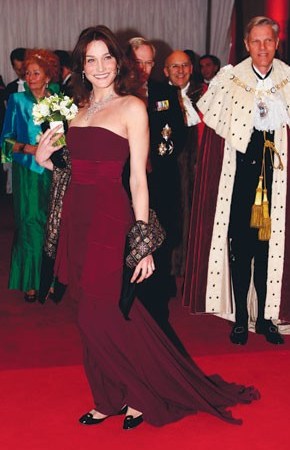 LONDON — Even the Brits love her now.

Carla Bruni-Sarkozy’s fashion parade continued Thursday as she crisscrossed the British capital for a charity lunch, a tour of Greenwich (including a quick smooch from her amorous husband, French President Nicholas Sarkozy) and another white-tie dinner. And Dior was clearly the winning brand — even though the French first lady ordered clothes from all of Paris’ couture houses, she wore only that label throughout the two-day jaunt — with a finale of a Dior bustier dress in Bordeaux mousseline of silk.

But her style had the British press eating out of her hand. While they splashed racy pictures of her all over their pages on Wednesday, 24 hours later the papers were turning entente cordiale into double entendre.

The praise bordered on the sycophantic, comparing Bruni-Sarkozy’s low-key elegance to that of Jackie Kennedy, Princess Diana and Audrey Hepburn. They even gushed about her nice-but-naughty aura.

“Miss Bruni looked as demure as a convent girl, and as ready to be naughty if the spirit, or the Prince of Wales, moved her,” said The Daily Telegraph. “She managed to make everyone else appear overdressed.”

The Daily Mail didn’t hold back: “The ghosts of Henry VIII and other old royal rogues must have been wolf-whistling from the rafters….You can take the girl out of the studio, and put her in the Elysée Palace. But you can’t take the supermodel out of the girl.”

At a ladies’ lunch on Thursday, Bruni-Sarkozy — dressed in a gray cashmere jacket with silver belt, green wool and cashmere trousers and a purple jersey coat, all by Dior — gave her first public speech since her husband took office.

The lunch was hosted by the Prime Minister Gordon Brown’s wife, Sarah, at Lancaster House, a 19th-century, neoclassical mansion not far from St. James’s Palace. Bruni-Sarkozy spoke on behalf of The White Ribbon Alliance, a charity that aims to reduce the number of mother’s deaths during pregnancy and childbirth.

“The speech was very endearing, and she delivered it in the most quiet, sexy, seductive voice,” said Wakeley, who met Bruni-Sarkozy as she made the rounds of the tables with Brown. “When she talks, she makes you want to lean forward and listen — she did very well.”

Lennox, dressed in a camel leather jacket and an A-line black skirt, called the lunch a “pleasant affair for a very interesting charity,” while Guinness called Carla “delightful.”

Bruni-Sarkozy wore the same gray and purple Dior outfit throughout the day, and one lunch guest even overheard France’s first lady lamenting — in a lighthearted tone, of course — that she didn’t even have time for a manicure before her big speech.

“Her hair wasn’t overblown or overdone — it looked like she’d done it herself — and I’m saying that in the nicest way possible. There wasn’t a real preciousness about her,” said Wakeley.

After lunch, Bruni-Sarkozy and her husband zoomed off to Greenwich to visit the Old Royal Naval College, where Sarkozy presented award-winning, British yachtswoman Dame Ellen MacArthur with the Legion d’Honneur.

On Thursday evening, the couple attended their final engagement — a white-tie dinner at the Guildhall, the seat of the City of London government — hosted by the Lord Mayor and Corporation of London.

Guests included Cartier’s Arnaud Bamberger and his wife, Carla; Hadid; Lionel Barber, editor of the Financial Times; Sir Ian Blair, head of the Metropolitan Police, and Chanel’s Olivier Nicolay. The senior royals on hand were the Duke and Duchess of Gloucester.

In stark contrast to last night’s menu — which had a French flair — Thursday’s was decidedly British with honey-roasted quail, timbale of scallop and sea trout, tournedos of British beef and a trio of classic Anglo desserts, including marmalade crème brûlée, poor knights of Windsor — that’s fried bread to you and me — and treacle tart.

Now Bruni-Sarkozy and her husband head back to Paris where the first lady and her beleaguered husband are unlikely to get the same kind of rapturous reception.

— With contributions from Laura Mitchell and Benjamin Canares