Carol’s Daughter Adds a Store to the Family

Carol's Daughter continues to grow up by opening its first mall store, which will serve as a template for the brand's future. 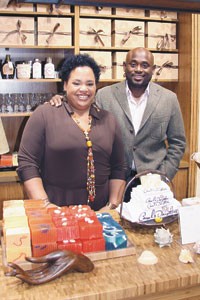 Carol’s Daughter continues to grow up — rapidly— by opening its first mall store, which will serve as a template for the brand’s future.

The celebrity-backed indie beauty brand, founded by Lisa Price in 1993, boasted one store and distribution of about 20 salons and boutiques when Price partnered with music and branding guru Steve Stoute in May of 2005. Stoute promptly recruited an all-star investor team, which includes Jada Pinkett Smith, Will Smith, Shawn “Jay-Z” Carter and Tommy Mottola, and has been busily expanding Carol’s Daughter’s reach.

Less than two years later, the brand is stocked in upward of 30 Sephora stores — with that number expected to nearly triple this year — and salons across the U.S. Carol’s Daughter also operates four freestanding retail stores of its own in the New York area, the latest of which has just opened at Roosevelt Field Mall in Garden City, N.Y., on Long Island. “This is the mall that my family and I shop in,” said Price. “So, to come here and see this is so great!”

In fact, Price admits to getting a jolt of excitement from each of her brand’s new retail locations. “I still get a thrill seeing the Carol’s Daughter name in so many places,” said Price, noting that the Roosevelt Field store is intended to serve as a model for future mall-based units. The company’s flagship in Harlem, opened in August 2005, is the model for nonmall stores. “That never gets old.”

The new, 816-square-foot space brings the best of what the team has learned from its other stores, noted Price. “For example, we found that glass, framed with wood, really allowed the products to shine,” said Price, who added that previous stores had featured all-wood display units. “Also, I feel it’s easier for customers to shop now. We’ve grouped everything together — it’s merchandised as more of a ‘family’ —so it makes it easier for the customer to try new things.”

The brand will open as many as six new stores this year, noted Price. First up: Newport Centre Mall in Jersey City, N.J., in April, and Fox Hills Mall in Los Angeles, set to open in July. Plans for stores in Atlanta, Philadelphia, Washington and Detroit are also in the works. “We have a lot of doors close to home right now,” said Price. “Now, we really feel like we know what we’re doing, and we’re branching out.”

Over the next five years, as many as 75 additional Carol’s Daughter stores could open, although Stoute is reluctant to put a finite number on that. “We’re looking at the best locations,” said Stoute. “We have a five-year plan for 75 to 78 Carol’s Daughter stores, and the brand has reached the point now where [other] retailers see the opportunities. We’re picking our spots.”

The store’s not all that Price and Stoute have on tap for consumers: The brand’s first color cosmetics collection will hit stores in April. The lip gloss line, dubbed Candy Paint, will include 12 shades, each $14.95. “This is our first step into the color market, and what we feel we’re bringing to the market is really the first all-natural lip gloss that gives you the shine and the beauty, while still nourishing your lips,” said Stoute.

There’s also talk of testing the beauty-service waters with a hand and foot spa in the brand’s Harlem door — “Just the women in the company would keep that busy,” said Price with a giggle. Bronzers, foundations, a luxury fragrance and a hairstyling line are also in the works.

While neither Stoute nor Price would comment on projected sales for the Roosevelt Field store, industry sources estimated that the store would do close to $2 million in retail sales in its first year of operation.