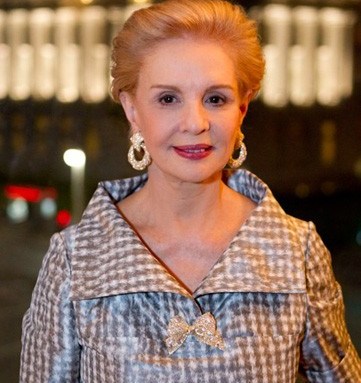 The ladies of San Francisco society turned out for a Carolina Herrera fashion show Wednesday night despite some presidential-level traffic.

President Obama and his motorcade were also in town for a Facebook town hall meeting and a private fundraiser in Pacific Heights, so traffic downtown was at a standstill. Herrera was delayed for over half-an-hour as she was driven to Davies Symphony Hall.

“We couldn’t move, couldn’t turn, so we just had to wait,” she explained to the fundraiser’s concerned guests during the pre-show reception. “But at least it was not an earthquake. When I was in San Francisco after the last big earthquake I was so nervous. I asked for a hotel room on the second floor so that I could jump out the window if I felt any shaking.”

Herrera went on to praise her San Francisco clients.

“I love San Francisco because women have personality and they are so chic,” she said. “My fall 2011 collection is a tribute to these individualists who love fashion, have a point of view, and know what they want.”

“I’m looking for gowns for the symphony and opera openings in September,” said Jean Larette. “I think I’ve found them.”

After the fast-paced fashion presentation, an auctioneer from Bonham’s & Butterfields offered trips to the Napa Valley, a Breakfast at Tiffany’s, and passes for fall’s New York fashion week. Marissa Mayer, among the 85 guests at Marc Benioff’s $35,800 per person dinner for the President, arrived from Pacific Heights just as dessert was being served. Gridlock over.