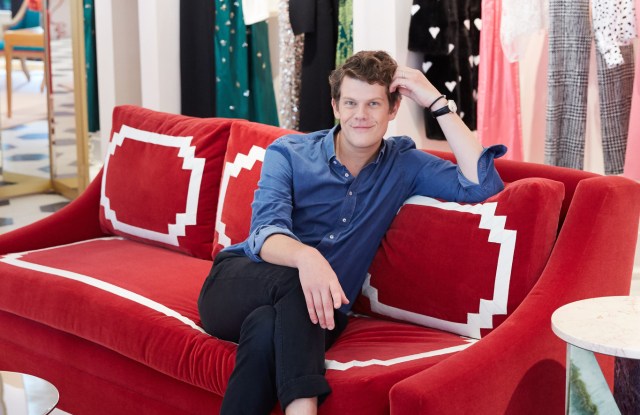 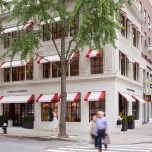 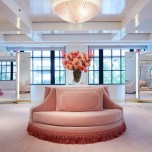 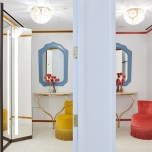 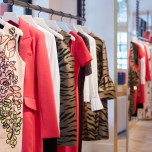 “It’s not about being greige.” So notes Wes Gordon of the Carolina Herrera aesthetic — a simple prescription that doesn’t begin and end with the clothes.

After honing his fashion vision for a few seasons, the creative director, who succeeded the house founder in February of last year, felt ready to take on the renovation of the brand’s New York flagship. Gordon determined to translate his baseline belief in fashion that makes you happy into an ebullient, celebratory retail space. “Everything I say about the clothes is that Herrera is an anti-normcore brand. It’s color and beauty. We are not a minimalist house. This space should reflect that, too,” he said. The store at 954 Madison Avenue reopens today after an eight-month renovation, its first in almost 20 years of operation.

Gordon spoke during a walk-through of the site earlier this month. Though the prevailing architectural motif then discernible was construction site, and the dominant decorative effects, drop cloths and dust, the vision had started to emerge and was on full, spirited view during a second visit early Wednesday morning: a three-story jewel box, its 5,000 square feet of selling space filled not with monotone, round diamonds but an array of glorious, sometimes dissonant gems and curiosities, their countless colors, shapes and patterns coalescing to deliver an offbeat take on the tony chic synonymous with the Herrera oeuvre. The design provides a template for simultaneously redone shop-in-shops at Bergdorf Goodman and Saks Fifth Avenue’s Manhattan flagship, also opening this week.

Gordon approached the project with creative gusto. “I think there’s a part of every fashion designer that secretly wants to be an interior designer and vice versa,” he said, noting that the renovation marks a major step in his full assumption of the brand’s creative identity. “Some brands, like the Calvin situation, they start from day one and have that full redo, overhaul of everything. We started with the clothes and we’ve been doing the clothes for a year now. So it’s a more gentle evolution.”

According to house president Emilie Rubinfeld, the second part of that equation is almost as important as the first. “Creating a new retail concept was essential in this stage of the Carolina Herrera evolution…,” she said. “The flagship is the physical representation of our codes and the values we are expressing today…This is our idealized environment to complement the clothes from Wes’ creative direction, but in many ways, the new concept reflects very much the spirit of the codes and values first established by Carolina herself.”

To manifest those codes as a physical space, the brand enlisted architect Andre Mellone of Studio Mellone and decorator Chiara de Rege, who consulted on the furniture. Mellone updated the space’s classical elegance with great respect and a dash of irreverence while de Rege brought overt exuberance to the furnishings.

“I like the handsome, masculine bones with the feminine dressing,” Gordon said, a fusion he considers both aesthetic and practical. “We can’t do this [full renovation] again. But if we want to, we can change a chair. The challenge with the space was doing something timeless and elegant without being boring.”

Designed in 1925 in the neoclassical style by architect George F. Pelham, the structure’s recent life has been all about tony retail. Herrera moved in in 2000, after acquiring the store from Hubert de Givenchy. At the time, WWD reported that the Herrera company bought the building from the designer, whose brand was by then owned by LVMH Moët Hennessy Louis Vuitton. By 1999, Carolina Herrera was fully owned by Puig.

Despite its timeless design and noble bones, the building didn’t escape a significant nip-tuck to its facade. “Our intention was enhancement, enhancement, enhancement, and [to] bring back the ‘residential’ feeling of the building’s original state,” said Rubinfeld. Positioned at the northwest corner of 75th Street and Madison Avenue, the building boasts two exposures and glorious windows, some of which had been covered over to create the kind of mannequin display space typical of Nineties retail. That Sheetrock got the sledgehammer treatment. “You want to take advantage of every window,” Gordon said. And in this case, swap them out for a fresh update. The new metal-framed windows were made in Italy and shipped by boat. (Storms at sea delayed their arrival, threatening the sacrosanct plan to open by New York Fashion Week, but in the end, the project finished on time.)

The renovation features other facade change as well, the addition of red-and-white striped awnings and, more significantly, a new double-door entrance added on 75th Street, the building’s longer side. “Fantasy world, it’s the main entrance,” Gordon said. “We still have the door on Madison that everyone, practically, is going to use. What’s beautiful about this one is that it made the whole facade symmetrical.”

Inside, functional fancy reigns, the residential feel a reference to the approach taken by Carolina Herrera herself when she designed the space as the brand’s first flagship. Ralph Lauren had trail-blazed Madison Avenue retail with his Rhinelander masterpiece, an intricately layered expression of his brand ethos, evocative and nongeneric to the last detail. Still, by the time Herrera was opening her store, fascination with the clinical white retail box had taken hold and dominated much of the street. She wanted to get away from that and create a space that would feel like home, radiating elegant comfort, yet still with a certain grandeur.

She did so with comfy-sleek furniture and a palette of warm neutrals — beiges, browns — that projected subdued hominess; the grandeur came via the huge, sweeping staircase Herrera commissioned. That remains in place, its bravado now in witty conversation with pink enameled walls, a red runner up the stairs, and a floor that demands as much attention as the giant spiral itself — a pattern of big, bold black-and-white limestone hexagons. That it may ring familiar to art-and-design buffs is no coincidence; it was inspired by the one in the Cy Twombly’s Roman residence.

“Those Horst photos of that apartment with the little boy dressed like Napoleon in one [picture] — so there’s that floor,” Gordon cited the reference. (Napoleon Boy is photographed standing on what appears to be an Aubusson rug, but there’s plenty of graphic tiling in other pictures from the series.) In fact, flooring became an obsession. To evoke a townhouse mansion, Gordon liked the idea of switching from the first-floor limestone to pale wood parquet for floors two and three, and, for the heck of it, “Dalmatian” terrazzo in the back hallways.

As for the walls, they proved a project in themselves, requiring 40 trial rounds to get the right shade and sheen, Gordon said, “so it’s not too shiny, it’s not too matte, it’s not too bubblegum pink and it’s not too beige,” but, like that fabled bowl of porridge, it’s just right. The first and second floors, both pink, feature most of the ready-to-wear, debuting with pre-fall and newly arrived fall, as well and other merch categories, arranged fluidly between the two. On the second floor, a curved table near the stairs holds bags and shoes exclusive to the store. Opposite, a triptych of arches holds the brand’s fragrances, a tableau of minimalist bottles and stiletto vessels, the latter, the cheekily named “Good Girl.” The white-walled third floor, dubbed the Penthouse, houses high evening and the bridal salon, and may do double duty as an event space, “for some lecture series or other cool things,” Gordon said.

Apart from the new door, windows and arches, most of the building’s “bones” remain intact, and were in some cases restored — the first-floor ceilings raised; the Nineties mannequin platforms ditched. It’s with the furnishings that Gordon really indulged. Zero regard was given to faithfulness to a particular style or period; selection hinged on a single essential qualification: “Pretty.” Make that two essential qualifications — add “functional,” a condition on which Carolina Herrera had also insisted. When she first set up shop, she was determined to create an atmosphere in which a woman on the hunt for the perfect dress would feel comfortable bringing her dog. “I wouldn’t go anywhere without my dog,” she told WWD at the time.

While Gordon didn’t mention the canine set, he stressed the importance of creating an unstuffy vibe. “I want it to be a place where you can have coffee or a woman’s husband can sit, or her kids, or she’s sitting there,” he said.

To that end, he noted a pair of 18th-century Gustavian chairs that he found and thought would be perfect for the first-floor seating area — sort of. “Antiques are precious and dainty and this big” — he indicated a two-inch distance with his forefingers — “and they break. I’m 6’4,” so I’m very sensitive. So we made a new version. We found someone in Los Angeles who hand-carved them bigger.” The chairs, upholstered in turquoise piped in hot pink, face a red sofa with white geometric trim across a three-legged coffee table with undulating mirrored top.

The other public floors also offer inviting spots to take a load off — on two, a white wool bouclé chaise and club chairs covered in a vintage floral with pink seats surrounding a maroon lacquered coffee table and on three, a Borne settee that would have been perfect for Queen Victoria had she been a pink person. This sits atop a pink rug with a whimsical scrolled border. And overhead, a giant pink floral flush-mounted lighting fixture.

Throughout, styles and periods commingle; pastels meld with pure brights; upholstered pieces variously flaunt grandma tassels and clean geometric outlines, the later pilfered from Carolina Herrera Jr.’s. home decor. Tables and consoles are a mix of old and new, substantial and delicate, straight-lined and curvy, in various metals, painted wood and marble. And oh, yes, the fitting rooms, each with seating and velvet wall trim in a color all its own — pink, turquoise, yellow, blue, green, navy. Decorative touches include a discreet sampling of art books, two demonstrative glass spheres by Peter Bramhall on the second-floor coffee table, a set of vintage Portieux Vallerysthal blue milk glass goblets on a bar cart in the Penthouse, and unfussy flowers throughout, in colorful vases made by Gordon’s husband, Paul Arnhold, a skilled glassblower.

Overall, the store radiates wit and grace, with a Cocteau kind of eccentricity that never crosses over to visual satire. Gordon thinks Carolina Herrera will approve. “The thing about the Herreras is that as grand and beautiful as it is, Mrs. Herrera’s house has always been about family,” Gordon said. “It’s exquisite, but it’s not about perfect. It’s filled with pieces they love, [not] too formal.”

Gordon has advanced that notion with unabashed cheekiness, respecting what he calls the building’s aristocratic roots while, he said, “adding icing that’s playful and fun.” He then restated the essential mantra of his still young tenure at Carolina Herrera: “Fashion should make you happy.”