"Only myself and Audrey Hepburn wore French couture in Hollywood at the time," French actress Leslie Caron says, sitting in her art-filled apartment. 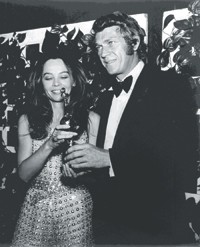 PARIS — “Only myself and Audrey Hepburn wore French couture in Hollywood at the time,” French actress Leslie Caron says, sitting in her art-filled apartment. “By the Fifties, the movie world was always two steps behind houses like Christian Dior and Givenchy.”

But more than 50 years after Caron was spotted as a gamine 19-year-old ballet dancer by Gene Kelly and called in for a “secret” screen test for “An American in Paris,” the 74-year-old actress is bidding goodbye to her couture-clogged wardrobe. Some 30 of her pieces go under the hammer tonight at Sotheby’s in London.

“I’m feeling surprisingly light about it,” says the actress, flipping through black-and-white snaps of her in a Christian Dior London oyster satin evening gown, worn to the Academy Awards in 1962, or an Yves Saint Laurent “mermaid dress” that she donned for a party with Kirk and Anne Douglas. “It used to make this wonderful swish-swish noise when I danced as all the plastic sequins kicked together,” she recalls.

A more unusual lot is a pair of sequined overalls designed by Marc Bohan for Christian Dior that Caron donned to present a Golden Globe to Steve McQueen in 1969. “I think it caused quite a spectacle at the time,” she says. “But it wasn’t a patch on the sorts of things Cher used to come up with,” she says, recalling one outfit she saw the singer wear that could “only be described as a cobweb.”

“It was all about glamour in those days; none of this jeans nonsense,” tuts the actress, recalling, with a laugh, how she would receive guests to her dressing room wearing her “housecoat”: a fuchsia Christian Dior puffball in taffeta.

She decided it was time to pass her fashion flame to another generation two years ago, after wearing one of her Dior couture gowns. “I was out at this event and suddenly noticed a split down the side where the satin had shot through,” says Caron, describing how she duly scuttled back to her room. It got her thinking that it was maybe time to part ways with a whole lifetime of dresses packed away in trunks.

“It’s partly the lack of room, and partly the fact that I’ve worn most of the dresses to five different balls and been photographed in them all,” says Caron, who says she has started penning her autobiography. “Now, I’m just thrilled at the idea that they’re going to be enjoyed by somebody else.”