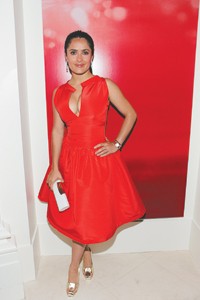 NEW YORK — More than one reveler faced a tough choice when it was time to pick out a Love charity bracelet at Thursday night’s cocktail reception at the Cartier mansion on Fifth Avenue here.

The party celebrated New York Mayor Michael Bloomberg’s proclamation that June 8 was “Declare Your Love Day” and kicked off a major fund-raising initiative by the French jewelry house. Guests were asked to declare their own passion for a cause by choosing one of eight bracelets, each featuring a different-colored cord corresponding to a different charity and an 18-karat rose gold ring. For each selection, Cartier donated $100 to the cause. The jeweler will continue to do this when the bracelets go on sale to the public this week, retailing for $475.

“I went for black because I liked the way it looked,” said Francisco Costa, still beaming after winning the CFDA Womenswear Designer of the Year award. “But then I felt bad for all the other causes.”

Lindsay Lohan, in a Hervé Léger dress, skirted the problem by choosing not one bracelet, but three, in black, white and red, which she added to a stack of diamond bangles embellishing her wrist.

“It was difficult to choose, but I went for those charities being represented by my friends here tonight,” said Lohan, referring to Michael Stipe, Salma Hayek and Ashley Judd, who circulated among the crowd of 250, including Sarah Jessica Parker, Scarlett Johansson, Liv Tyler, Chloë Sevigny, Iman and Janet Jackson.

Lohan said she was heading to Paris to model for her first fashion campaign, but she was mum on the details.

“You’ll find out soon enough,” she teased as she scurried off to join a select crowd of 93 for Cartier’s first dinner on its rooftop.

Judd, in a Michael Kors cotton eyelet floor-length dress, said she had just returned from Kenya, where she worked on a documentary about AIDS to be aired this fall on the Learning Channel. She was pleased to join in Cartier’s efforts.

“It’s wonderful that Cartier is issuing a challenge to other corporations to increase their social responsibility,” Judd said.