Tweety Bird, the endearing cartoon character that has made a career of tormenting Sylvester the cat, is spreading those tiny wings into fashion.

By Nola Sarkisian-Miller on May 4, 2005
View Slideshow 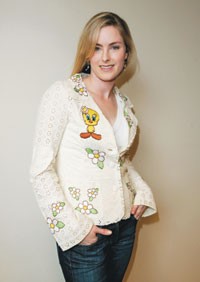 LOS ANGELES — Tweety Bird, the endearing cartoon character that has made a career of tormenting Sylvester the cat, is trying to spread those tiny wings into fashion.

Capitalizing on Tweety’s appeal to women, Warner Bros., which owns the character, is starting a line of apparel and accessories featuring the canary. The Tweety Collection will debut exclusively at Kitson in Los Angeles and Scoop in New York during launch parties set for May 10 and 18, respectively. The hosts will include celebrities such as Rachel Hunter, Tori Spelling and Christina Applegate.

It’s the first time the studio is singling out such an icon for a product push, but likely not the last. In the last two years, character-based clothing has been transformed from a discount and mass-tier distribution business to one focused on the high-end retail channel courting aging Gen-Xers and even nostalgic Baby Boomers.

“We wanted to create a cool and contemporary program that speaks to both the 12-year-old girl and 35-year-old woman,” said Karine Joret, senior vice president of worldwide communications for Warner Bros. Consumer Products.

Warner Bros. first sought to brush up Tweety’s cheekiness with the addition of eyelashes and a daisy hair clip. Then the studio looked to about a dozen manufacturers, many based on the West Coast, including Joystick, Raw 7, Cosmosfact and Junk Food, to be a partner in the product design of the more than 20 items.

That has resulted in Cake Couture’s plush cashmere sweater in aqua and pink, hand-encrusted with Swarovski crystals shaped to form Tweety’s head. The line’s parent company, And Cake, also produced T-shirts, such as Tweety astride a Vespa or flanked by colorful surfboards dotted with crystals.

Los Angeles-based And Cake’s owner and designer, Stephanie Larrowe, said she created the designs in step with the “positive feelings and memories” the cartoon elicits.

“As long as it [the character clothing] is done tastefully, I don’t have a problem with it at all,” said Larrowe, who added she is also in talks with the studio about its upcoming apparel launch for “The O.C.” television program.

The venture was a first for Joystick, which has made a name in the midst of the trend of heavily embroidered apparel. Its take on Tweety involved detailing a T-shirt and cream eyelet blazer with embroidered daisies.

This story first appeared in the May 4, 2005 issue of WWD. Subscribe Today.

Raw 7, which has worked with Warner Bros. on its Looney Tunes collection, created cashmere hoodies detailed with fleurs-de-lis on the sleeve, and New York-based Shoshanna crafted a white bikini in an allover Tweety and pink-heart print.

Wholesale prices for the Tweety line range from $18 for a Cosmosfact T-shirt to $450 for a Madeline Beth bag.

Another draw for the designers is the inclusion of their own label in the products. The collection doesn’t involve licensing rights, Joret said.

The appeal for Kitson and Scoop is the exclusivity. They will carry the product through June before Warner Bros. opens distribution to other retailers, and will devote in-store shops to the collection. Tweety-printed shopping bags for both stores will also heighten the marketing push.

Kitson owner Fraser Ross, who is already selling Warner Bros.’ Willy Wonka shirts, said the formula is working because of America’s love affair with pop culture. He anticipates $200,000 in sales for the first month.