NEW YORK — Never one to mince words, Oleg Cassini was lighthearted on Wednesday night about his renewed popularity, after picking up a lifetime achievement award from the Laboratory Institute of Merchandising. 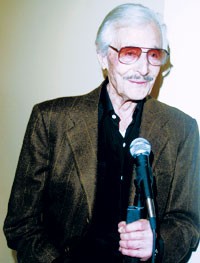 NEW YORK — Never one to mince words, Oleg Cassini was lighthearted on Wednesday night about his renewed popularity, after picking up a lifetime achievement award from the Laboratory Institute of Merchandising.

“This is the 12th award I’ve received in two years,” the 91-year-old designer mused. “You kind of have a feeling…you’d better give this guy an award quickly.”

Morbid as that might sound, Cassini is often his toughest critic — or biggest fan, depending on the situation. This occasion hinted at a little of both. The sight of Hollywood couple Lisa Rinna and Harry Hamlin accepting an Innovator in Fashion award for their West Coast store, Belle Gray, provided the perfect opener for Cassini.

“It’s a very difficult moment for me next to those beautiful people. I am, I confess, 91 years old and I only look 50,” he said. “I thought I was going to meet with the students, instead I see a lot of very rich capitalists. Are they here to buy my clothes?”

The awards marked LIM’s 65th anniversary, and Lord & Taylor’s Lavelle Olexa, the CFDA’s Stan Herman and the Fashion Calendar’s Ruth Finley were among those who turned out for the festivities. Cassini also was inducted into the school’s hall of fame, as were Elsa Schiaparelli and Lenore Benson, posthumously. Scoop’s Stefani Greenfield accepted a fashion innovator award, but when Rinna praised Greenfield for helping her to get Belle Gray up and running, she said, “Oh, stop it.”

Recalling his days of dressing Jacqueline Kennedy, Grace Kelly and Gene Tierney, Cassini said, “I am a great believer in luck. It was not because of my good looks, really. It was because of my talent — my enormous talent.”

He was more reserved before the presentation, lamenting how a recent round of golf left him with a twisted ankle. Asked offhand if he ever read Somerset Maugham, he said, “No, I never read him. But I knew him.”

Better still, he remembered that his friend, Charlie Chaplin, did a great impression of Maugham. The memory made him smile and reflect on other friends such as Kennedy, Kelly, Tierney, Marilyn Monroe, Don Budge, Gianni Agnelli, Freddy Heineken, Anita Ekberg, Ursula Andress and others “who had such influence.”

As for the lifetime achievement award, Cassini, said: “In this materialistic world we live in, surviving is an important thing. That’s what Americans love — the winners.”