NEW YORK — For active women who would rather jog outside than drive to the mall, there are now a bevy of print and online activewear catalogues where they can peruse everything from the latest surfboards to hard-to-find plus-sized sports... 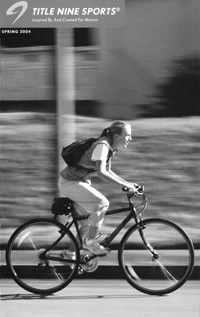 NEW YORK — For active women who would rather jog outside than drive to the mall, there are now a bevy of print and online activewear catalogues where they can peruse everything from the latest surfboards to hard-to-find plus-sized sports bras.

Activewear for women, a $16 billion business, has found a particularly fertile field in the catalogue arena, which in recent years has attracted an influx of upstarts. There are now outlets for athletic large-sized women, as well as those wanting streetwear-oriented looks. There are catalogues that cater to women who want athleticwear with some fashion twists, as well as those who are looking for a hint of activewear with their latest fashion item.

Some — such as shegear.com, which specializes in technical sporting equipment and apparel — are niche players and not connected with a larger operation, while the new Activa catalog was recently started by Road Runner Sports, which bills itself as the world’s largest running store.

“The women’s active market has been outpacing men’s for some time,” said Tami Anderson, marketing director for Athleta, a catalogue and Web merchant. “Now, many companies have realized that women have different needs than men when it comes to activewear and that these women are very savvy shoppers. And young girls now grow up playing sports and they are going to be even more savvy.”

Among the catalogues catering to active women are Activa, Athleta, Junonia, Title IX Sports and shegear.com, in addition to catalogues for women from manufacturers such as Prana, Burton, Patagonia and Champion. Even Bloomingdale’s is getting in on the act. This spring, the retailer will debut an activewear-only catalogue as part of a larger plan to pump up this segment of its business, said a company spokeswoman.

Many direct retailers catering to this segment now seem to recognize that women participate in more than one sport and need merchandise and apparel for various activities. Athleta, for example, has sections devoted to skiing and other outdoor activities, running and general fitness, which covers areas such as yoga and weight training.

Activa is among the latest entrants, having just launched its catalogue and Web site last spring.

“We have over 3 million customers with Road Runner Sports and women are about 50 percent of that base,” said Debra Christle, brand manager for Activa. “Our female customers were asking for a greater selection in styles and for a broader range of activities. In addition, the women’s fitness market is bigger than the running market and we were not serving all of these potential customers just through the RRS catalogues.”

Activa plans to mail eight catalogues this year, she noted. This catalogue is organized by brand so that all the products from a certain company are grouped together. For example, there are sections for Nike, Puma and Adidas, as well as Under Armour, Prana, Asics and Champion. In the back are sections for footwear, as well as sports bras. The average price point in the catalogue is about $100, according to Christle.

Activa is somewhat more price-conscious than the other catalogues and its cover boasts of free shipping on orders of $100 or more, something the other catalogues don’t do. She declined to give sales projections, but said the company expects to triple its sales this year over 2003.

Some merchants that have been around for some time are upping their fashion quotient as a way to reach a larger audience. Shegear.com, a six-year-old Web catalogue that carries technical equipment and apparel for women, just hired a new buyer who is focusing more on fashion-forward apparel offerings, said co-founder Carrie Fletcher.

“We want to have more items that appeal to an athletic lifestyle and aren’t specific to one sport,” she said.

Among other items shegear.com offers are surfboards and wet suits that are designed specifically for women, as well as apparel for activities including hangliding, kayaking and climbing.

“Women now want products that are more feminine and make them look like women, and not products that are scaled down versions of what’s available for men,” Fletcher said. “In part, we see our role as trying to educate women on why they need to buy women’s stuff.”

Athleta, a catalogue and online merchant that made its debut in 1998, aims to offer women an edited selection of the best in activewear, said Anderson.

“We like to introduce women to new brands that might not be available at stores in their cities,” Anderson noted. “We have a boutique style of merchandising. We look to combine technical products with style.”

The company also invests in photography and the catalogue is filled with real athletes in various activities, including running, cross-country skiing, hiking and yoga. Athleta has been working to increase its private label offerings, which now account for about 50 percent of its merchandise, according to Anderson. But its offerings are not limited only to activewear: the company sells super-trendy Ugg boots, which are worn by fashionistas from Los Angeles to New York for activities that often produce little sweat.

“We do carry some products around the sport lifestyle,” said Anderson, who also declined to give specific sales information, but said sales have increased every year.

Junonia, a Web site and catalogue catering to plus-sized active women, is the brainchild of Anne Kelly, who said she founded the company in the mid-Nineties after finding a lack of attractive and sturdy athletic wear for larger women. Although it started as an eight-page catalogue, the company has grown every year and now produces five books a year that go to more than 6 million women.

While the early catalogues focused on swimwear and activewear, it has branched out to include a variety of active-casual offerings and even a small selection of career apparel, mostly in private label merchandise.

“This is still an underserved market,” said Kelly, interviewed while on a buying trip in New York. “While more manufacturers are aware of this market, they still have a hard time doing it.”

Junonia, which takes its name from the Roman goddess Juno, who was a supposed protector of women, carries sizes ranging from 14 to 40, while most traditional retailers only go up size 26, Kelly said.

Kelly takes a hands-on approach to the business, overseeing much of the merchandise to ensure that it’s high quality, and she stresses the functionality of Junonia’s offerings, since many items use special fabrics and different construction than traditional activewear.

“For years, plus-sized women were very inventive about finding substitute goods,” she said.

Junonia merchandise has elements such as non-restricting armholes, soft-covered elastic waistbands and a QwikDri fabric with a wicking element.

While it seems that there may be a glut of catalogues with all the newcomers, some industry executives feel there is room for all.

“Everyone has their own niche,” said a spokeswoman for Title IX Sports, which is considered the pioneer in women’s active apparel catalogues, having started its business about 13 years ago.

“We don’t focus on brand names and we are much more concerned about function rather than fashion,” the spokeswoman said.

Nonetheless, at least one high-profile activewear merchant chose to get out of the direct mail and online business. Lucy.com, which was founded in 1999 and found quick success, three years ago exited those channels to focus on opening freestanding stores, of which there are now 15, including one in Manhattan.

The company said at the time that it decided to focus on stores to achieve “the clearest path to profitability,” said Sue Levin, a former marketing executive at Nike who founded the firm.

But with the growth in activities such as yoga and Pilates and increasing numbers of participants in marathons around the country, there seems to be plenty of room for direct merchants.

“Women often don’t have time to shop and here they can order at three in the morning,” said Activa’s Anderson. “Women have always been good at multitasking in life and they approach sports the same way.”