The 70-year-old designer has a habit of speaking his mind in a manner as bold as his animal prints. 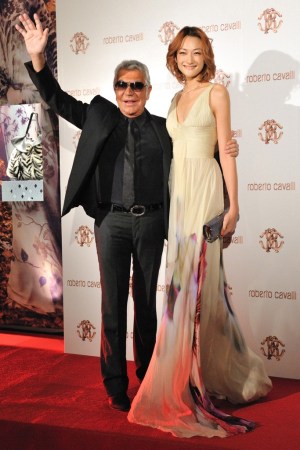 TOKYO — Roberto Cavalli may be one of the last major European designers to open his first freestanding boutique in Japan, but that is perfectly fine with him.

“I think there seems to be a fatigue in this country, a fatigue of the brands on Fifth Avenue, on Madison Avenue or Via Montenapoleone, brands like Chanel, like Armani…young people want to distance themselves from older people, or rather their parents,” Cavalli said, justifying the brand’s decision to shun the traditional shopping district of Ginza in favor of a relatively quiet back street of the trendy Aoyama neighborhood for its flagship.

“I want it to be that [shoppers] come to find me. They shouldn’t find me by accident walking in Ginza,” he said Tuesday, one day after arriving via private jet. “I think this is a really winning strategy. I will demonstrate this to the dear Messrs. Chanel or other people like that. Fine, you dress the grandmothers and the mothers and I’ll dress their kids.”

The 70-year-old designer has a habit of speaking his mind in a manner as bold as his animal prints and the interview, held at his suite at the Grand Hyatt, was no exception. When he wasn’t casting aspersions on other luxury brands, he lobbed ribald jokes as an Italian variety show flickered on the television behind him. “I’m young. I have another 50 years of life,” he said before going on to perform a mathematical equation and estimating that he will have sex another 15,000 times before his demise.

“I’ve shocked her,” he laughed heartily at a reporter’s expense.

Cavalli acknowledged that he doesn’t have the name recognition here that he enjoys in many other parts of the world, but he said that is starting to change and he actually views it as an advantage. “Even if I’m old, other people don’t know that. I make very young fashion,” he said.

“Japan has held its own, it made Prada rich, it made Armani rich, it made Versace rich at one time. Today it does so to a lesser degree, but I’m convinced that tomorrow it will make Cavalli rich,” he stated, hours before hosting a party to fete his store, which attracted a host of Japanese celebrities including model Ai Tominaga.

This trip, which coincides with Japan’s bigger-than-usual Fashion’s Night Out festivities slated for Friday and Saturday, marks Cavalli’s first “official” visit to Japan, but he has made several personal trips here over the years. Some 35 years ago, he made his first trip here and spent about a month in Osaka studying printing techniques. He marveled at how much the country has changed over the past few decades and said he plans to take as many photos as possible to inspire future collections.

“There used to be not a single sign with Western letters. Today, they are everywhere,” he said.

Cavalli still has a modest presence in the region. The 3,000-square-foot Aoyama flagship is the brand’s first freestanding store in Asia. Several years ago the brand had a distribution agreement with Coronet for Japan, but the partnership never generated significant results. The Italian company let the contract expire before setting up a wholly owned Japanese subsidiary in 2008 and installing Marco Scardigli as chief executive officer. Today, Cavalli has five corners in Japanese department stores and distribution in about 30 specialty retailers in the country.

Scardigli said the store is performing more or less in line with his expectations and the brand’s overall sales figures are “extremely good,” although he declined to reveal numbers. He also made a point of stating that Cavalli has kept its prices in Japan in line with those of its stores in Europe and elsewhere, unlike many other European houses that make considerable markups on their merchandise.

The Cavalli store was slated to open last spring but it was delayed after the March 11 earthquake and opened to the public in September. Scardigli said Japanese consumers are definitely bouncing back from the quiet days immediately following the disaster.

The executive also noted that Japanese women, often considered conservative and more reluctant to bare skin than their counterparts in Europe and the U.S., are starting to become more confident about expressing themselves through fashion.

“I’ve seen the behavior of Japanese women changing a lot,” said the executive, who has spent some 22 years on and off in Japan. “I’ve seen them willing to show off a bit more their personality and passion for fashion…it’s the perfect timing for us,” Scardigli said, stating that Cavalli’s customer base in Japan ranges in age from 20 years old to 60 years old.

Roberto Cavalli Group has had its ups and downs in recent times and posted a loss in 2009. Last year, the company returned to profitability but saw sales drop 6 percent to 176 million euros, or $232.2 million, on a combination of factors including lower royalties from its Just Cavalli diffusion line license, which recently switched hands from troubled Ittierre to Staff International. Profits and sales picked up in the first half of this year.

Cavalli, who was at one point negotiating the sale of a minority stake in his company before ultimately balking on price, said he is happy with the current structure of his company and its management under ceo Gianluca Brozzetti. The designer said he might consider taking the company public at some stage in the future but not right now, given market volatility.

“It’s a matter of waiting,” he said, suggesting that his company might one day take a cue from Prada, which listed on the Hong Kong Stock Exchange this year. “I think that maybe in the future these things could happen only in China,” he said.

For now, Cavalli is focusing on growing its presence in Asia. Earlier this year, the house inked a deal with Shanghai-based UCCAL Group to open close to 100 stores in China over the next five years, including a freestanding store in Beijing. Scardigli said the brand will also work to expand its presence selectively in Japan through department stores rather than through another freestanding boutique.

Cavalli said he is also looking at the possibility of one day opening a cafe or restaurant in Tokyo, like those he has in Milan, Florence and Dubai.

“I like Japanese young people, so I want to be with them a little more often,” he said.