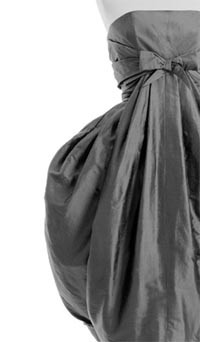 ROME — Six winters ago, Enrico Quinto was on the slopes of Kitzbuhel, Austria, ski poles in one hand and cell phone in the other, instructing a friend who was bidding for him at an auction at Bergdorf Goodman.

Quinto, a fashion collector, wanted to secure an ecru wool waffle shift, adorned with tasseled pockets, which had belonged to the Duchess of Windsor.

“We got the dress but since the phone connection was all fuzzy, we ended up with other batches we didn’t really care about, like Dior shoes from the Fifties and Seventies,” smiled Quinto.

Over the past 10 years, Quinto and his longtime friend-cum-partner, Paolo Tinarelli, have gathered 6,000 items of apparel, accessories and costume jewelry. The clothes make up the lion’s share, or 70 percent, of the collection that dates back to the early 1900s.

To publicly share their private passion, Quinto and Tinarelli are hosting their first exhibition called “Un Secolo di Moda,” or “A Century of Fashion,” that kicks off today and runs through Feb. 1. It’s on display at the Accademia di Francia, a cultural and artistic center, inside the Villa Medici Palazzo, in the heart of Rome.

As one might imagine, selecting the 174 looks with which to dress the mannequins sparked lots of hemming and hawing. “It was hard but we wanted to avoid an overkill,” noted Quinto, weaving his way through the colorful racks of vintage gowns, complete with hoops and protected by pieces of tulle, that are scattered throughout their offices in downtown Rome.

The 92-year-long fashion journey starts with a 1910 Empire dress by Poiret and ends with a white back-to-the-future bustle dress with high-tech straps from Viktor & Rolf’s spring/summer 2002 collection.

In between, Jean Patou represents the Twenties, Chanel and Lanvin the Thirties, and Dior’s Bonheur ensemble incarnates postwar optimism. The “Red Shoes” dress designed by Jacques Fath epitomizes the opulence of the Fifties, as Krizia, Courreges and Missoni embody the swinging Sixties.

The Seventies are symbolized by Yves Saint Laurent’s part vamp and part androgynous vision, while Giorgio Armani and Donna Karan get recognition for blanketing career women in the Eighties.

“My favorite period is between 1965 and 1972, when couturiers favored graphic structures and shapes, as well as the use of double fabrics,” said Quinto, 37.

“I’m always so fascinated by the fact that each garment represents or morphs into a different lifestyle and that you can create such a distinct image with a dress,” said Tinarelli, 39.

Both view clothes as objects of design, a perception that avoids getting stuck in a time warp.

“There is a strong tie between art and fashion in the 20th century — Poiret used fabrics designed by Raoul Dufy, Chanel and Schiapparelli turned to Picasso and Salvador Dali while Saint Laurent dedicated a collection to Mondrian,” said Quinto.

He observed that with the blossoming of luxury goods, fashion has become a victim of globalization and that designers hopping from one fashion house to the other have weakened a handful of once-venerable brands.

“It’s no surprise that actresses such as Nicole Kidman, Demi Moore and Julia Roberts turn to vintage for special occasions,” added Quinto.

To that extent, Quinto proudly admits that the dress Nicole Kidman wore to the premiere of “Moulin Rouge” in 2001 was a Lori Azzaro number that he had traded with vintage guru Cameron Silver in Los Angeles — where Kidman picked it up — for an Yves Saint Laurent safari jacket.

When it comes to building on the collection, Quinto and Tinarelli are open to department stores, auction houses or flea markets, as well as private donations. Sometimes, the streets of New York City will do the trick.

“Years ago, I was standing on the corner of Madison and 67th Street waiting for a cab when I noticed 15 garbage bags and old trunks lined up outside a building to be trashed,” recounted Quinto. “I couldn’t resist taking three bags and later discovered they were filled with fabrics and haute couture gowns from the late 19th century. Unfortunately, they were all separates because the matching pieces were probably in the other bags.”

Quinto admits that it was his Dutch mother — who indulged in the graphic renderings of Pucci, Ken Scott and Roberta di Camerino — who ignited his passion for clothes and for rational clean shapes.

The idea of gathering special fashion pieces followed two events in 1994: a charity sale for the Red Cross in Monte Carlo and the birthday celebration of Queen Beatrice of Holland, during which people organized sales for pure fun and pleasure. “Both events were so much fun that we decided to try something similar,” said Quinto.

The duo spread the word that they were having a high-end garage sale in a small market in Rome and were flabbergasted by the amount of stuff they ended up with. “It was a gold mine. Roman aristocrats showed up with an armful of clothes and memorabilia,” said Quinto. “We ended up with great pieces from Louis Vuitton and Chanel that triggered our hunger to learn and possess more.”