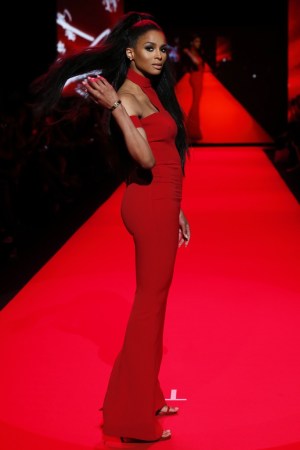 EXTENDED SELF LIFE: Designers might be running themselves rampant with last-minute changes but show goers would be remiss to try to do the same with their own physiques. With a burgeoning fitness company and a business partner named Gwyneth Paltrow, Tracy Anderson said,”There are no quick fixes. I wish people would stop asking that question.”

Even before walking in Thursday’s Red Dress fashion show, her fellow VIP models quizzed her for fail-proof tips. People are always asking, “How do you get Jennifer Lopez’ abs or Gwyneth Paltrow’s legs?” she said. “It’s not a matter of, ‘Be like me.’ It is more about, ‘Let me help you get the life you need.'”

Just ask Hilary Rhoda who “kills it” all the time in Anderson’s classes and understands how to connect that healthy physicality to her modeling.

Like several of the other celebrity models, Anderson brought with her loads of devotees. Thalia danced and texted her way to the runway entrance while keeping up with her Web master and presumably the singer-turned-Macy’s-designer’s 6.6 million Twitter followers. Zendaya waited until her final turn to post a snapshot of her Rubin Singer catwalk debut for her five million Instagram fans. Sitting quietly with her hands in her lap, the “KC Undercover” actress said she is recording a new album. Her inner calm belied her teenage self. “I’m not nervous. I’m just chillin'” Zendaya said.”This is fun. It’s for a good cause — heart disease prevention. It isn’t about who looked the best in their dress.” (Maybe because she did.)

Video blogger Bethany Mota chalked up her fame and her nearly 2.4 million Twitter loyalists to just being herself, which sometimes means being a little weird, and her barebones at-home decor. That every girl appeal helped land her an Aeropostale clothing deal.

With a new role as an Ivy League-educated transgender attorney on a CBS drama, Laverne Cox also had a recent birthday to celebrate. But as soon as she touched down in New York Thursday, she went straight to the dentist. “Self care, self love.” she explained.

Even Anderson was about to give herself a breather, asking a handler after the show, “So now we can change?” Yes, the fitness specialist was told, “And then we can go eat Mexican — or anything you can get your hands on.”