NEW YORK — A sneak peek of celebrity-designed corsets for the second annual Frederick’s of Hollywood Lingerie Art Auction & Fashion Show gives the lowdown on what kind of lingerie Tinseltown celebs like — sleek, sexy and, at... 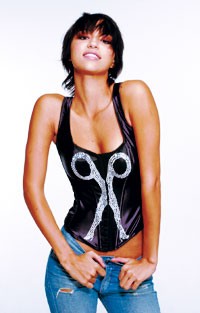 NEW YORK — A sneak peek of celebrity-designed corsets for the second annual Frederick’s of Hollywood Lingerie Art Auction & Fashion Show gives the lowdown on what kind of lingerie Tinseltown celebs like — sleek, sexy and, at times, whimsical.

The lineup of more than a dozen celebrity-designed corsets promises to make the Oct. 20 event at The Roosevelt Hotel in Los Angeles unusual in a town where everything has been seen and done. A cocktail party, as well as a live auction, will be staged around the hotel’s David Hockney-painted swimming pool, followed by a formal fashion show. On Oct. 18, Frederick’s will sponsor an online auction of corsets at fredericks.com.

Academy Award-winning actress Susan Sarandon will host the event, and she has not only designed a corset called Prayer of the Heart, which will be available as a limited-edition piece at Frederick’s of Hollywood, but also has codesigned a “Thelma and Louise”-inspired corset with her co-star in that film, Geena Davis, which is detailed in amusing mini-Wild Turkey bourbon bottles.

Other celebrity designs will include A Man’s Dream by Britney Spears; a “Sopranos”-inspired Carmela number by Edie Falco; a feathered Christmas Corset by Julianne Moore; an ingenue potted daisies style by Cyndi Lauper; a ribbon-embellished look from model and actress Eva Mendes, and a sequined scissor motif style by the Scissor Sisters, a rock band from the U.K. that has sold more than three million CDs in the U.S. There also will be one-of-a-kind corsets designed by Olivia Newton-John and Eve Ensler, author of “The Vagina Monologues.”

“I’m so excited for this year’s Lingerie Art Auction,” Sarandon said in a statement. “I participated last year with my daughter, Eva, and had a great time. Frederick’s of Hollywood asked me to host this year to benefit RAINN [the Rape, Abuse & Incest National Network], so I’ve enlisted my friends and colleagues to create corsets for the event. We’ve gotten submissions from everyone from Julianne Moore to Britney Spears. My hope is that this auction raises not only funds for RAINN, but also awareness of their very important mission.”