LONDON — Designer Jenny Packham is best known for her bridal gowns, red carpet sparklers and demure, printed or embellished dresses worn by the likes of the Duchess of Cambridge, but on the rocky terrain of British fashion — where so many companies struggle to survive — she’s also a member of an elite society of long-standing brands.

Her 30-year-old business, which she runs with her husband Mathew Anderson, is independent, profitable and makes its money from clothing — with the business split 50/50 between the eveningwear and bridal collections. She has a healthy wholesale business, a flagship on Mount Street here, and in July opened her first store in China at the Beijing Peninsula Hotel, a 153-square-foot space that carries her bridalwear.

Packham has always stuck to what she does best, and her clients — Emily Blunt, Kate Hudson, Rihanna, Gigi Hadid, Taylor Swift, Adele, Kate Winslet, Angelina Jolie and Kerry Washington — keep coming back for more. The Duchess of Cambridge wore a Packham dress each time she appeared outside St. Mary’s Hospital for her photo op after giving birth.

On the opposite pole of the celebrity spectrum, Kim Cattrall’s Samantha Jones was also a big fan, with the stylist Patricia Field tapping Packham for the racy character’s costumes in “Sex and the City.”

Over the years, Packham has made it a priority to forge relationships with stylists and customers alike and said she’s keen to dress up-and-coming talents as well as established ones. 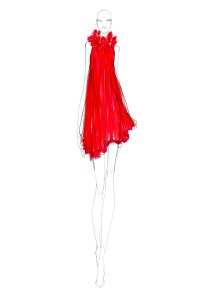 The designer has also forged some smart collaborations over the years, with Debenhams as part of the Designers at Debenhams program, with L.K. Bennett for footwear, Goldsmiths for diamond jewelry and Dessy for bridesmaid dresses. Two years ago, she inked a deal with David’s Bridal for a capsule collection of dresses.

One of her next projects is of a more personal nature: Ebury Press revealed earlier this month that it has acquired the rights to Packham’s first book, a memoir to be published in 2020. Called “How to Make a Dress,” it is about the power of clothes, the art of getting dressed and Packham’s creative process.

There are more developments to come: Having always reinvested profits in the business and navigated the rough and smooth, Packham and Anderson are now looking for an investor, with an eye to expanding their retail reach in China, the U.S., Europe and the Middle East. They also plan to launch an e-commerce site, broaden the product range and build on their three decades in business.

“It’s been 30 years, and we feel that we have the brand name and the expertise — everything — to expand a lot quicker at this point. We think it would be really nice to take it to the next stage now, and obviously we’re going to be pretty choosy” about a future partner, said Packham, who returned to London Fashion Week for the spring/summer 2019 season to mark her anniversary.

The designer staged two presentations at her flagship, one for press and buyers and a separate one for her customers. It was quite a homecoming, as Packham has been showing her collections in New York since 2010.

In a joint interview with Packham at the Mount Street store, Anderson said it’s the right time to be thinking about investment for a number of reasons, including setting a succession plan, tapping into growth markets and building up specific product categories such as cocktail wear.

Asked what sort of investor they’re seeking, he said: “I think we want someone with a genuine insight into what has already been achieved and what we’re trying to develop, who gets what we do. And we want to get what they do, too. It’s all about the relationship.”

In the meantime, they’re pushing ahead with the business, which turned over 8.5 million pounds in fiscal 2017, with profits of 244,399 pounds, according to the latest accounts filed at Companies House in the U.K. Anderson said he’s projecting 9 percent to 10 percent gross profit in the current year.

They’ve begun working with Net-a-porter, doing exclusives, and in November they plan to do more contemporary separates for the site. They’ll also be launching their own e-commerce site later this year, and not a moment too soon.

Anderson said customers have been taking matters into their own hands and buying straight off the look book pages. “We’re e-mailing the look books and they’re preordering it because they know the fit. It’s crazy,” said Anderson, adding that it’s going to take time to adjust the offer online.

Retailers are fully behind the brand, which is stocked at stores including Harrods, Harvey Nichols, Selfridges, Neiman Marcus and Bergdorf Goodman.

“Harrods has a long-standing partnership with Jenny Packham and the brand has garnered a loyal clientele both in our eveningwear department and on Harrods.com. The red carpet pieces are especially popular for event dressing. Regardless of the trends going on in fashion, from Jenny we can always expect unequivocal glamour,” said Maria Milano, head of women’s wear.

While Packham hasn’t exactly been quick to launch e-commerce, it rapidly cottoned onto the power of social media, especially with regard to the bridal business.

“What I’ve seen changing in the bridal businesses is the experience, which starts with the first phone call and ends when they take their dress,” said Packham.

“When girls get engaged they often get fashion photographers to take a picture and it goes straight onto Instagram. It’s why the service we offer has to go perfectly because it’s their story of the dress — and it didn’t use to be like that,” she said, adding that the commitment coming from the company is huge — as are the risks.

“With social media, if someone doesn’t have a good experience they will be very public about it.”

It’s not something Packham should worry about: Over the years she has taken pains to cater to her customers, whether they’re big names or not, and believes the payoff has always been worth it, especially in the celebrity arena.

“Celebrity dressing has given us enormous brand awareness all over the world, and for me, seeing one of our dresses on the red carpet or at a celebrity party is the best endorsement we can have because somebody chose to wear it somewhere very special,” said Packham, adding that she’s ready to work that strategy in China, big time.

“China is a new market in terms of international designers, and I think they like that reinforcement of a celebrity wearing something. Here, you know, when you wear something somebody will just say ‘Oh, that’s nice.’ In China, it’s like ‘I want one.’ A celebrity wears the dress and then we get orders for that dress.”