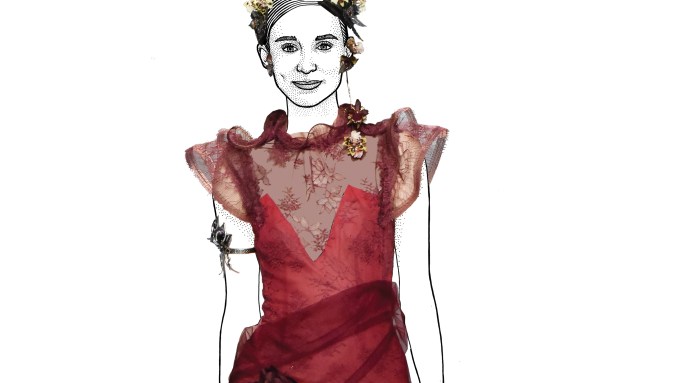 In Hollywood, the speculation centers on which films and actors will win. The rest of the world is more consumed with what those actors will wear, as the Oscars have become the biggest, flashiest, most Hyped fashion show on Earth. Here through page 49, WWD makes our picks for the women — most from the just-ended New York fall collections — and, on pages 50 and 51, for the men. — Bridget Foley and Mayte Allende
FEMALE NOMINEES

Lawrence’s penchant for retro glamour often projects older than her 25 years, and less interesting than she is as an actress. Happily, Lawrence has recently digressed from that stylistic norm with looks better suited to her youthful beauty. For the Madrid premiere of “The Hunger Games: Mockingjay Part 2,” she chose a black lace Ralph Lauren that updated the siren genre with a casual attitude, while in Paris for the film, her Dior Couture long-sleeved white gown looked both simple and storybook. For the Oscars, Lawrence should again look toward Lauren, specifically, his velvet dress that deflates the ballgown into a languid jewel.

Fashion-wise, Blanchett is a living goddess. Her statuesque grace and experimental inclinations make her as compelling on the red carpet as she is on-screen. She has worn everything from simple and classic to silhouettes that are genuinely challenging, yet her dress choice never seems out of character. For the Oscars, we’d love to see Blanchett take an artful, less-is-more approach in Vera Wang’s beauty gown, its sliplike simplicity elevated with bold Deco-inspired embroidery.

But for the dazzling gold Calvin Klein Collection column with cutout waist she wore to the Golden Globes, Larson’s red-carpet choices veer toward conservative structure with a faintly retro orientation. The approach can minimize her natural sophistication. Derek Lam’s graceful gown in quadrants of silk jersey and pebbled crepe would beautifully highlight Larson’s classic blonde beauty in a modern, elegant way.

Young and red hot, Ronan radiates quirky beauty. Her emergent sartorial flair is already apparent in red-carpet choices that tend toward the offbeat and at times, girlish awkwardness, whether intentional or feigned. She gets that stylistic daring can run sweetly eccentric. If that doesn’t call out for one of Gucci’s decorative beauties (this one, from pre-fall), what does?

Rampling’s recent red-carpet choices present an interesting dichotomy — on one side, tailored chic, sometimes harshly so, and on the other, piled-on eccentricity. Tailored wins. (The long ago suspender-ed Lucia of “The Night Porter” shouldn’t now head toward “Grey Gardens.”) To heighten the glamour and soften the effect, Rampling should opt for Valentino’s perfect elongated shirtdress, its interest intensified with bold decorative medallions.

Jason Leigh takes a low-key approach to the red carpet. So much so that she does herself a disservice, erring on the side of too simple, even if sometimes, simple comes in sparkly variations. On the upside, she’s not given to fussy retro undos. Light is great-looking, and for the Oscars, should amp up her fashion just a bit. Giorgio Armani Privé’s embroidered dress is in a beautiful, easy-to-wear shade. The silhouette brings something new to the strapless genre, and the length — at the ankle — allows for some serious fashion (and not to mention a great shoe) without looking forced.

Hollywood’s reigning fashion “It” girl, Mara is one of the few actresses out there with a highly developed, unmistakable sense of style. With her pale skin, dark hair and red-to-black lips, she projects an aura of Snow White gone glam-Goth, a look she works to great advantage and with utter ease. While Mara is of that rare breed — clothes filly who can make almost any dress her own — Rodarte’s blood-red lace swirls over a corseted base would be Oscar-perfect. She could even pull off full-on runway, with flowers in her hair.

Rooney Mara watch out — Vikander is proving herself a serious fashion girl, too. In recent high-profile red-carpet outings, Vikander has shown an affinity for that combination that often imparts a boho sensibility — pattern and flou. It suits her, playing to the feminine daring she projects. Conversely, when, at the Golden Globes, Vikander kept the graphics but lost the fluidity in Louis Vuitton’s curvaceous, high-sparkle gown, she looked Vegas-ready. For the Oscars, Vikander should reembrace boho chic in Altuzarra’s exquisitely embroidered bandanna dress.

Her red-carpet choices have taken McAdams all over the place; she’s experimented with diverse looks from ballgowns to one-sleeved siren shapes to a strategically embroidered tulle mermaid. While interesting, her diversity initiative hasn’t garnered for her a red-carpet personality in the manner of, say Cate Blanchett. For the Oscars, McAdams should go for this geometrically embroidered halter dress from Chanel Couture. Cut well above the ankles, its linear blouson silhouette would cast her wholesome prettiness in a sophisticated light, one with a touch of artful mystery.

Winslet heeds the call of Old Hollywood. She does it well, as hers is a voluptuous glamour given to period references and strong color. Yet her red-carpet looks have become formulaic, and sometimes, aging. For the Oscars, Winslet should take a leap forward with her glamorous sensibility in Carolina Herrera’s chiffon gown, proportioned for graceful movement. We’d love her to wear it as Herrera showed it — with simple hair and sans bling.

The days of wearing top hat and tails on the red carpet are long gone. But if this awards season is any indication, the men are starting to fight for their right to become style setters — NBA players, beware.

Velvet blazers, colored jacquard smoking jackets and double-breasted peak-lapel jackets are among the chicest modern choices that this season’s nominees have worn so far.

Finding the balance between following the codes of black-tie dressing and pushing one’s personal style forward can be dangerous — it’s hard to forget the powder-blue disaster that Jared Leto wore last year — but taking a calculated risk is a must.

Here’s a closer look at this year’s Oscar nominees plus show host Chris Rock, with suggestions on how to ensure a style victory regardless of who takes home the gold statue. — Alex Badia

Fassbender’s red-carpet choices are always impeccable, as evidenced by the perfectly — and we don’t use that word lightly — tailored Tom Ford suit that transformed him into an evening superhero at the Golden Globes. A continued collaboration between the two, perhaps a midnight blue tuxedo with contrasting shawl lapel and a hint of a pocket square, would position him to pick up the mantle if Daniel Craig decides to retire as James Bond.

The poster boy for a traditional black tux took a different turn at the BAFTAs in a midnight blue crosshatch-patterned Giorgio Armani suit. This might suggest that Leo is ready for other changes — even if he’s a longtime pal of Armani’s. A Ralph Lauren Purple Label white double-breasted shawl-lapel blazer over sleek black pants and a hand-tied bow tie would channel the old glamour that worked so well for him in films like “The Great Gatsby.”

The host always has more fashion freedom than the nominees. That was proven by the array of fab tuxedos worn by Neil Patrick Harris last year — and the time he wore nothing but a pair of tighty-whities. Not that Rock should sport a Speedo on stage — instead, how about a head-turning fashion statement: a tuxedo with gold-sequined paisley-embroidered embellishments on a fitted blazer over a pair of baggy black pants from Alexander McQueen’s fall runway? And if Rock is afraid of losing his street cred, pair the look with white sneakers.

The sleek hair, clean-shaven, fit body and sharp suits of his “American Psycho” days are gone. This awards season has been a sea of ill-fitting three-piece suits, thick beards and bad haircuts. A minimal yet sharp black tonal Calvin Klein with matching shirt and small bow tie would break that habit. And please shave, get a haircut and maybe hit the gym a few times before the big night — no need to play a serial killer to have killer looks.

His good looks, tough demeanor and excellent sartorial choices are drawing similarities to the likes of Paul Newman and Steve McQueen. Although it’s an overstatement to put him in the same league as those two style gods, Hardy’s unconventional choices have channeled McQueen bad-boy elegance. As such, another three-piece ensemble from Ralph Lauren Purple Label would continue to push his sensibility. The single-breasted one-button-wide shawl lapel paired with a smaller bow tie is reminiscent of one of Newman’s famous pictures, so it feels like a safe bet.

Although admittedly a generalization, highly respected stage actors tend not to be the greatest dressers. But the English actor is taking this statement to new heights with his strange attachment to a worn-out shawl-lapel tuxedo and vest with silk piping and rumpled fedora. A peak-lapel one-button evening suit from Dunhill, paired with a classic shirt and silk bow tie, is as traditional and elegant as one can get. If he’s desperate for a theatrical fedora, the British house can surely provide him with a brand new one.

Who remembers the sad suburban style of his “Breaking Bad” character? Cranston cleans up well and based on his latest successful choices, an emerald velvet blazer from Burberry with contrasting black silk lapels and a strong shoulder would work best. He’s at the point where he has turned his image around and can now be seen as a leading man in a romantic comedy.

Fashion models step aside. Redmayne’s red-carpet appearances have become an example of what an actor can bring from the European runways, and he’s not afraid to be adventurous. In this vein, a fantasy Gucci look with a flashy geometric jacquard pattern — it is the Oscars, after all — would hit the mark. And maybe substitute the traditional bow tie for a conversational silk flowered bolo one.

With his perennial boy-next-door good looks, Damon’s at his best when he goes traditional and classic. A modern Valentino suit featuring an elongated skinny silhouette with a wide peak lapel, simple white shirt and skinny tie would play to his approachable yet handsome appeal, both on Earth and on Mars.

Ruffalo has been trying to clean up his fashion act, replacing his disheveled style with a commitment to classic black and simple evening suits this season. But the lack of texture and dark colors don’t work well with his rugged features. A sharkskin color would do the trick — a gray Giorgio Armani tux with some texture and depth, and a contrasting black peak lapel and velvet bow tie would give him just the right amount of suave.

Everyone loves a comeback. Stallone’s personal style, however, is a different matter. He still has the frame of a former body builder, not the easiest shape for eveningwear. A few weeks ago, sitting in the front row at the Saint Laurent show in Los Angeles, he told WWD that Hedi Slimane was making a custom tuxedo for him for the Oscars. The opening look of the fall Saint Laurent show would exude a chic-sleek sensibility with a retro late Seventies twist — very Rocky Balboa.