Celebs Sound Off at Candie’s Event

A fund-raiser to help prevent teenage pregnancy is bound to be a little controversial, and guests at Candie's "Event to Prevent" Tuesday night did not disappoint.

By Rosemary Feitelberg on May 5, 2005
View Slideshow 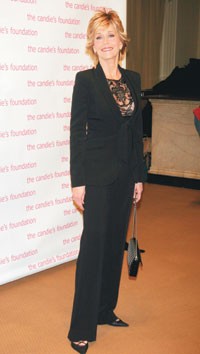 NEW YORK — A fund-raiser to help prevent teenage pregnancy is bound to be a little controversial, and guests at Candie’s “Event to Prevent” Tuesday night did not disappoint.

After all, Jane Fonda, Rosie O’Donnell, Katie Couric, Jewel and Ashlee Simpson aren’t exactly shrinking violets. Jewel and Simpson headlined the evening with live performances at Gotham Hall here, raising $400,000 for the Candie’s Foundation. There was no question of lip-synching with Jewel, who belted out “Someone Over the Rainbow” without any musical backup. She was equally unwavering about her support for Candie’s.

“There are a lot of companies that do a lot for charitable things for very transparent reasons. After talking with the people at Candie’s, you can tell they really believe in the cause,” she said, then deadpanned, “There will be condoms handed out when you leave.”

Onstage, Simpson talked about women making the right choices, and offstage the 20-year-old said she is in the early stages of setting up her own clothing collection and expects to have one within the year.

“It’s absolutely something that I have really wanted to do since I was a little girl,” she gushed.

In a white La Perla tunic and James jeans, Simpson said, “I am so proud I bought my whole outfit by myself yesterday. When I came back, everyone said, ‘You did good.’”

All too familiar with the media’s dissection of celebrities, she said her sister Jessica offered some advice. “She told me, ‘Don’t listen to it, be yourself, believe in yourself and no matter what you do everyone will have an opinion.’”

Fonda, who was spat upon by a Vietnam veteran during a book signing for her autobiography last month, has dealt with a lifetime of opinions — her own and those of others. And O’Donnell, before giving Fonda an award for founding the Georgia Campaign for Adolescent Pregnancy Prevention, praised her for her anti-Vietnam War stance.

As to whether women can be opinionated without being controversial, Fonda said before the event, “It depends what her opinions are about. If they are about vegetables, then no, she won’t be very controversial. But hopefully women will have opinions about important things and will express those opinions.”

Asked if it is up to brands to help America’s children, the Valentino-clad Fonda said, “It’s great when they do. Funds for these programs are being cut back because of the war in Iraq. The more companies that step in, the better.”

During the fund-raising auction, photographer Patrick McMullan made the winning $5,500 bid for lunch with Fonda, who promptly gave him her office number. Once that was taken care of, she asked, “Are you single?”

“Good.” said Fonda, slapping him on the shoulder with approval, before walking away.

Mark Badgley and James Mischka landed singles of another kind. When two women went head-to-head for a private fitting with the designers, New York State Parks Commissioner Bernadette Castro, the auctioneer, badgered them to increase their bids to $15,000, and each would score a Badgley Mischka evening gown. One bidder took some persuading, so the designers offered to throw in a handbag. Still unconvinced, one guest suggested they throw in a pair of shoes. Mischka smiled nervously but did not cave. “We don’t have shoes,” he explained later. (There was Badgley Mischka footwear through last fall and the company, which is now owned by Candie’s, plans to develop another collection.)

After much hemming and hawing, both bidders agreed to pledge $15,000, making them the evening’s high rollers. The designers even trumped a movie night at Hugh Hefner’s Playboy mansion with Jenny McCarthy.

Emcee Tony Danza, joked, “Yeah, that night we’ll give you a video of Jenny McCarthy.” Much to his chagrin, McCarthy had to bow out as mistress of ceremonies and sent along two videos in her absence.

Others were live and kicking. Before presenting an award to Couric for her NBC report on teenage sex, Donny Deutsch, chief executive officer of Deutsch Inc. and host of CNBC’s “The Big Idea With Donny Deutsch,” made mention of her using plants on the “Today” set to hide her legs. “That’s not true,” Couric blurted from her table.

Before the festivities, TV host Joan Lunden went to bat for Couric, who was criticized in a recent New York Times article about the management shakeup at “Today’’ and the program’s declining lead over ABC’s “Good Morning, America.’’

“They crossed the line,’’ she said. “It seems to be the pattern with the media in this country. They’re there to build you up. But when you get there, they look for an opportunity to take a shot at you, particularly when someone is in a position with so much responsibility and so admired. I think it was just a really cheap shot.”

In terms of “The Event to Prevent,” Lunden, who has seven children including two sets of twins from surrogate mothers, said she wanted to support the cause. “Thank goodness there are good messages like these and good programs. Young kids these days are exposed to so much.”