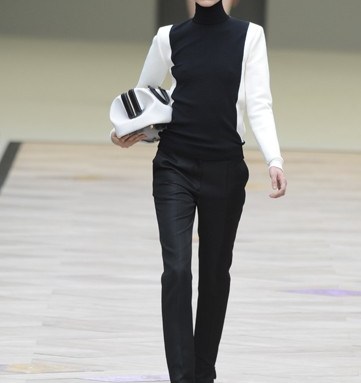 PARIS — Celine — whose current growth rate is the antithesis of minimalism — is about to plant two stores with maximal visibility.

This fall, the French brand will open twin flagships in key fashion capitals: one boasting 90 feet of frontage at 870 Madison Avenue in New York; the other a three-story unit at 24 Rue François 1er in Paris that is more than double the size of its current incarnation.

The boutiques will showcase a new concept by architect Peter Marino — and make a retail statement on a par with Celine’s business trajectory, which has been fueled by designer Phoebe Philo, whose streamlined nouveau classics have been widely influential since she returned to fashion in 2009 after a three-year hiatus.

The developments, disclosed in an exclusive interview with Celine chief executive Marco Gobbetti, speak to the success of a strategy implemented last year that saw a clean sweep of Celine’s entire product offer, and a dramatic downsizing of its retail network.

“We really repositioned, and refocused….Now we have a good platform for growth,” said the executive, describing “exponential” business in the U.S. last year and projecting a “very high double-digit” increase worldwide for 2011. “I think everyone sees a significant potential for this brand.”

Gobbetti declined to provide figures, but said revenues in 2010 were flat: quite an achievement considering that he quietly weeded out 30 percent of Celine’s directly operated points of sale, shuttering 15 shop-in-shops in Japan and all but one of its five U.S. boutiques, leaving only a Bal Harbour, Fla., location. Freestanding stores in Moscow, London and Paris were also closed, while China was left untouched. In total, 35 units went dark, leaving Celine with a total of 70.

According to market sources, Celine was loss making last year, but its fortunes are expected to improve dramatically this year as revenues rebound to historic highs approaching 200 million euros, or about $289 million at current exchange rates.

Sounding relaxed and upbeat, Gobbetti recounted how the overhaul of Celine, owned by LVMH Moët Hennessy Louis Vuitton, is quickly bearing fruit, bolstering his confidence that it has the “potential to fairly quickly become a midsize brand” — industry shorthand for companies with revenues in the 500 million euro range ($723 million).

Celine last enjoyed a moment in the sun when American Michael Kors helmed the brand, from 1997 to 2004. Then came a lackluster period when Roberto Menichetti and Ivana Omazic held the design reins.

To be sure, Philo has quickly transformed the ho-hum house into a hot fashion franchise with a strong press and retail following.

In the space of a little more than a year, Celine leapfrogged 20 or 30 places in overall editorial-credit rankings to enter the top 10 or top 15 in most major markets, Gobbetti reported.

And retailers are eager to take advantage of the buzz as well. Celine is carried in some 400 doors worldwide, with the wholesale channel accounting for about 30 percent of revenues.

“There is an incredible consumer demand for Celine,” said Ginny Hershey-Lambert, executive vice president of merchandising at Bergdorf Goodman. “I foresee a substantial growth. Phoebe is clearly talented. Her aesthetic mix of clean but modern-with-a-twist appeals to customers of all ages. The brand maintains a very clear message and keen strategy.”

“Phoebe Philo is known for her woman-friendly, effortless style and has reoriented fashion away from a past decade of overly girly, trendy clothes, into a more grown-up minimal aesthetic,” she said. “It is a stealth brand of pure design.”

“In rtw, two best-sellers are the silk cady sleeveless dress at $1,350 and the natural linen tricolor Empire sleeveless dress for $1,850. In handbags, we have had a fantastic reaction to the large Clasp bag at $2,300; for footwear, the two-piece wedge at $620 in black and camel,” she said.

Asia has long been a stronghold for Celine, and the region — including Japan — still generates about 40 percent of revenues. The United States represents about 10 percent, with Europe and other countries accounting for the remainder.

But with the U.S. business doubling in size every year, Gobbetti has great expectations for the world’s largest consumer market. Already he’s vaulted from one American client, Nordstrom, to 60, including the crème de la crème of department and specialty stores.

Gobbetti peppered his conversation with the word “relevant,” also a favorite of Philo’s, who has taken a sober, reality-based approach to Celine in her post-Chloe career, focusing on luxurious and streamlined daywear with the masculine touches she likes wearing herself.

“Whatever we do, we try to focus on a meaningful number of items, without overextending, and trying to maintain this concept of integrity,” Gobbetti said. “The U.S. market is responding extremely well to the product, both ready-to-wear and accessories.”

Gobbetti said Celine has already surpassed 50 percent sell-through of its spring-summer collection in its own boutiques worldwide, and he’s anticipating shortfalls of some merchandise. Dresses are the best category for spring, whereas coats and jackets move into the top-selling slot for fall collections.

While Celine bid farewell to such perennial bags as the Boogie and Bittersweet, and diminished logo-driven and opening-price products, the brand already has three hits on its hands: the Classic, Luggage and Cabat lines. Gobbetti called them “pillars” of its leather-goods business, and Philo had introduced all of them with her first collection.

“They have elements that make them very interesting, but they are timeless,” Gobbetti asserted. “The element of timelessness I think adds another defining ingredient to Celine. In everything we do, whether it be ready-to-wear, accessories or shoes, we are really trying to look at it as wardrobe building.”

Now with the business in high gear, Gobbetti is turning his attention to ramping up the retail footprint anew. He stressed that the Paris and New York flagships represent important milestones.

While he declined to give sales projections for either unit, he noted the brand’s temporary Paris boutique — despite a raw, no-frills construction-site setting — is the number-one location worldwide in terms of gross revenues and productivity per square foot.

Celine moved into the handsome prow-shaped building on François 1er in November 2009 with the intention of quickly returning to its historic location at 38 Avenue Montaigne, on the French capital’s principle luxury retail artery, while it underwent renovations. Now it will use the Avenue Montaigne address as the boutique’s temporary location when work begins in about two weeks on the François 1er site, which will expand to a third floor and claim a total surface of 6,500 square feet.

Gobbetti said extensive structural changes are planned at both new flagships, but he declined to give any hints of the new decor.

The Madison unit boasts six large display windows on each of its two floors, and will boast selling space of about 4,500 square feet. The location was recently occupied by a temporary boutique for Christian Dior, and before that, Gianfranco Ferré.

“We are convinced we can build a strong relationship with our American clientele, so New York is fundamental for that,” Gobbetti noted. “The business impact of these two flagships will be significant.”

If there’s one anomaly in Philo’s ultra-modern fashion universe, it’s Celine’s anemic digital presence. In fact, the company prohibits online sales and only operates a basic site that will be revamped and enhanced this year.

Gobbetti said the strategy is deliberate, to keep tight control on setting its new brand identity and image, and to drive customers to discover the products in stores. “We will continue to study Celine’s e-commerce potential, and one day we will do it,” he said.

Besides the twin flagships, Celine is plotting measured retail expansion this year. It recently opened a shop-in-shop in Harrods, and plans to relocate and expand its accessories stand in the landmark London department store.

Other openings include two shop-in-shops at Tsum in Moscow; a relocation and expansion of the Cannes store; an accessories corner in La Rinascente in Milan; a full-range shop at Mitsukoshi Ginza in Tokyo, and a freestanding store in Taipei’s Breeze Center. Celine will also further expand its shop at Dover Street Market in London.

The year 2012 will see Celine start to remodel its network with the new Marino concept: expanding current boutiques, relocating others and adding new directly operated units.