Students were asked to focus on the last 10 minutes of the game in a project devised by mobile phone company Three U.K., Chelsea Football Club and Central Saint Martins.

LONDON — The world of sports has fed fashion for years, but what about the other way around?

Students at Central Saint Martins in London were challenged last fall with reimagining the future of Chelsea Football Club uniforms, and even fans’ clothing, inspired by cultural and technology shifts.

The students decided to focus on the last 10 minutes of a soccer game – arguably the most nail-biting part – in a project sponsored by Three U.K., the mobile phone company, Chelsea FC and CSM.

They were given full access to Three’s purpose-built 5G Lab within the college, and encouraged to use and explore connectivity, literally or metaphorically. 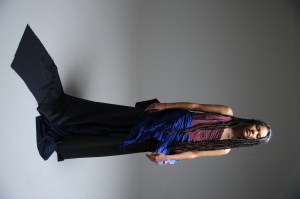 After four months, the winning concepts were revealed: They included garments resembling a nun’s headdress, embodying the idea of football as a religion. There were also exaggerated proportions, inflatable helmets, the use of sportswear combined with hand-dyed textiles and wet finishes meant to represent players leaving the pitch “and becoming one with the fans.” 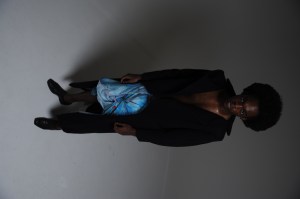 Soccer fans got some new designs, too, including a hand-crocheted scarf, striped arm warmers and a puffy Chelsea lion scarf.

The Goal Keeper uniform was designed by Christopher De La Cruz, who said his concept was of the players “getting chased by the ball,” and using their bodies to create large volumes in mid-air “like a parachute falling from the sky.”

One Player uniforms was designed by Stella Satie and was inspired by “the aftermath of the game — captivating the raw emotions and passion of the player leaving the football pitch in victory — drenched in rain, sweat, dirt and blood but glistening in a crystal halo,” she said.

Two students, Aminat Seriki and Joel Lines, clubbed together to create a fan’s outfit. “Our look is based upon the notion of the ‘Football Dad.’ We researched outerwear references with the combination of mundane objects such as an umbrella, merging the two elements together in their given designs,” the duo said.

Sarah Gresty, course leader of BA Fashion at Central Saint Martins, said: “The students really brought a new vision to the game and used the deeper, more overlooked aspects to create something fresh and exciting.”

Gary Twelvetree, Chelsea FC marketing director, said that “fashion within the sport is becoming a bigger part of the game each year, and we’re lucky to have been able to work with some of the most creative minds in that sector to future gaze on where it can lead to.”