There were some musical moments at the Cosmetics Executive Women's 2005 Achiever Awards last week. 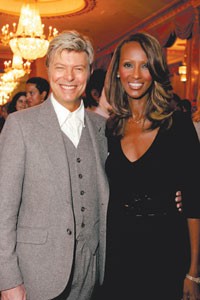 NEW YORK — Despite a raised terror alert in Manhattan, the seven honorees at Cosmetics Executive Women’s 2005 Achiever Awards, which was held last week at the Waldorf-Astoria Hotel, did their best to lighten the mood.

“I bet you’d all rather hear about Tom and Katie, but I’m saving that for next week’s issue,” Martha Nelson, managing editor of People magazine, said wryly as she opened the program.

BeneFit founders Jean Ford and Jane Ford, who shared an award, confessed that when CEW president Carlotta Jacobson called to tell them they would be honored at the event, “we thought she was drunk dialing.”

That’s far from the truth, according to Robert Mettler, chairman and chief executive of Macy’s West. “Someone once joked that Jean and Jane were born with silver compacts in their mouths,” he said. Indeed, he continued, cosmetics seem to have been in the twins’ DNA: “They are both wildly intelligent business women,” he said. “Our 10-year partnership has been one hell of a ride.” The Fords also proved they can carry a tune: The duo wrote and performed their own cosmetic-themed song to the tune of “Sentimental Journey.”

“I asked not to go first, but now I’m sorry I’m going second,” said Robin Burns, who followed the singing twins to introduce honoree Jill Granoff, president and chief operating officer of Victoria’s Secret Beauty. Granoff succeeded Burns in that role after her retirement last year. For her part, Granoff was modest: “Never in my life did I think I’d follow singing Ford sisters and precede David Bowie,” she said with a smile.

Bowie, who revealed that he and Iman met on a blind date, noted in his introduction that he knew his wife was the one for him when she discussed her shopping habits: “The real clincher was that she rarely went shopping,” he joked. “I ran the figures, and asked her to marry me. She ran the figures, and agreed.” Although he’s not against splashing out now and then: The brown Hermès Kelly bag Iman was carrying was a gift from Bowie.

“I feel like the best is yet to come,” said Iman, saying she has been gratified to see the changes in the industry over the last few years. “Women of color have been accepted not as exotic birds, but as beauties.”

As she accepted her award, honoree Lyn Kirby, president and ceo of Ulta Salon, Cosmetic & Fragrance, recalled her transition from Manhattan-based Avon executive to Illinois-based president and ceo. She also has a little advice for aspiring executives: “When the door is opened for you by someone you respect, walk through it and embrace change,” she said.

Malone returned the compliment: “I’ve married into a wonderful family,” she said. Malone also spoke movingly of her recent battle with breast cancer, thanking Lauder for introducing her to her oncologist, Dr. Larry Norton, “the man who saved my life.”

Nina White, deputy general manager and senior vice president of marketing for Lancôme USA, also paid tribute to mentors from within her company, “many of whom are sitting at table five,” she said. Chief among them was Carol Hamilton, president and general manager of L’Oréal Paris. “I hope one day that I can be someone’s Carol,” she said, calling Hamilton “an amazing business leader and an icon in this industry.

“One of the richest gifts I’ve been given is my career at L’Oréal,” said White.