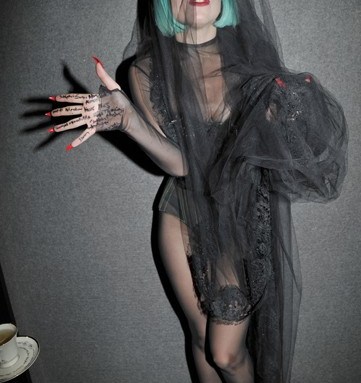 There was no shortage of fashion at Monday’s CFDA Awards, but the one style matter everyone was wondering about was that of Lady Gaga’s grand entrance.

“I was thinking she should come all plain,” CFDA president Diane von Furstenberg said. “That’s what I would do, but then again I am not Gaga.”

Michael Kors had a similar sentiment. “Gray flannels and a camel coat,” he suggested. “Now that would be shocking. What about a sable-lined egg?”

Nominees had more than just Gaga on their mind. “I know it’s a cliché, but it’s just an honor to be nominated,” said men’s wear nominee Patrik Ervell, whose date for the night was Kirsten Dunst.

Celebs on hand included Kanye West, Naomi Watts, Gerard Butler, Ashley Greene and Miranda Kerr. Swarovski nominee Joseph Altuzarra was looking forward to hearing Marc Jacobs speak. “I think he deserves it. And I’m really curious as to what he has to say, if he has any wisdom to impart.”

During the evening at Lincoln Center’s Alice Tully Hall, the CFDA also handed out several special honors, including a Fashion Icon Award for Gaga and a Geoffrey Beene Lifetime Achievement Award for Marc Jacobs. Phoebe Philo received an International Award, while the Media Award in memory of Eugenia Sheppard went to Hilary Alexander and the Founders Award in memory of Eleanor Lambert to Hal Rubenstein. Arthur Elgort was given the Board of Director’s Special Tribute Award.

As for Gaga, she arrived fashionably late, a turquoise-hair-topped tower of black custom Thierry Mugler beaded tulle and lace over her spiked leather and mesh bodysuit, posing on the red carpet for photographers before escaping backstage in her sky-high heels.