"I know we all compete with each other, but the truth is that I feel there is a lot of love and support," said Diane von Furstenberg at Monday night's cocktail party to reveal the nominees and honorees of the 2008 CFDA Fashion Awards. 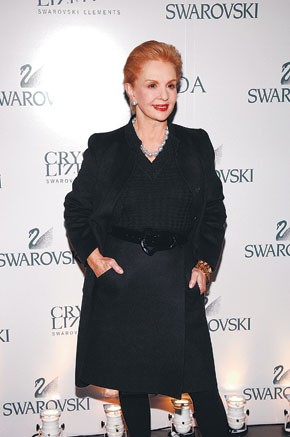 NEW YORK — “I know we all compete with each other, but the truth is that I feel there is a lot of love and support,” said Diane von Furstenberg at Monday night’s cocktail party to reveal the nominees and honorees of the 2008 CFDA Fashion Awards.

The evening, hosted by Swarovski and the Council of Fashion Designers of America board at The Rooftop Gardens at Rockefeller Center, felt like a reunion of sorts, with many designers and editors buzzing after coming back from Europe earlier this month. One person who couldn’t make it, though, was Antwerp, Belgium-based Dries Van Noten, the recipient of this year’s International Award.

Either way, she said, he is expected to attend the June 2 awards at the New York Public Library.

Calvin Klein’s Francisco Costa introduced the three Womenswear Designer of the Year nominees, which included him. It could have been an awkward moment, but Costa handled the situation with charm, shrugging his shoulders and thanking the crowd for the nomination. For Michael Kors, this year marks the fifth nomination for the CFDA’s Accessory Designer of the Year award. He has yet to take the trophy home, but remains hopeful.

“Elizabeth Taylor got married many times before she met Richard Burton, so we should always keep on trying,” Kors said. “We must be doing something right, that people always remember us.”

The awards ceremony will take place at the New York Public Library’s Celeste Bartos Forum on June 2, followed by a dinner at the Bryant Park Grill restaurant. For the first time this year, the awards will be simulcast at the auditorium of the Fashion Institute of Technology, and tickets will be made available to students.

At Monday’s party, CFDA executive director Steven Kolb disclosed that the organization is working on two books: a scrapbook memoir of Geoffrey Beene that Paper magazine editor and publisher Kim Hastreiter is putting together for publication this fall, and an American Fashion tome devoted to accessories, which Candy Pratts Price, this year’s Eugenia Sheppard award recipient, is curating for the holiday season.

“We’re also trying to resurrect the CFDA cookbook,” Kolb noted, adding that it could include such things as designers’ favorite recipes and tips for entertaining. “Who knows what’s next after that?”