CFDA Booked and Ready to Go

Win or lose, nominees for this year's CFDA and Swarovski awards will go home June 2 with something for posterity — a book featuring highly...

By Rosemary Feitelberg on May 27, 2008
View Slideshow 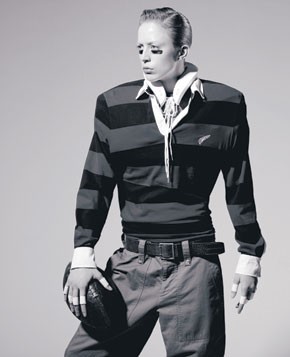 Win or lose, nominees for this year’s CFDA and Swarovski awards will go home June 2 with something for posterity — a book featuring highly individualized photographs of Raquel Zimmermann in their various designs.

Styled by Karl Templer and shot by Mikael Jansson, the keepsake came together under creative director Trey Laird.

Templer suggested shooting Zimmermann in the 25 nominees’ finery and creating a character to relay each designer’s sense of style. In Michael Bastian’s men’s wear, for example, she plays the hulking athlete with football in hand and greasepaint under her eyes. Zimmermann is considerably more light-stepped in a printed Dries Van Noten ensemble with tousled hair. “I felt this was for the ultimate American fashion night, so I wanted it to be strong and powerful. It’s also nice to capture the year for a designer,” Laird said.

Jansson also shot portraits of three of this year’s special honorees — Van Noten, Carolina Herrera and Candy Pratts Price. Mayor Michael Bloomberg, the fourth honoree, was unable to be photographed due to his schedule. The New York Times’ David Colman has written essays about everyone featured in the book.

Laird’s creative team was up all night for four nights shooting, with Eugene Souleiman and Mark Carrasquillo handling hair and makeup, respectively. Laird also had Kenji Toma photograph close-ups of abstract flowers that are interspersed throughout the book. The floral touch also accents the fresh peonies that accompanies guests’ invitations, as well as the new CFDA logo Laird has designed that graces the book’s cover.