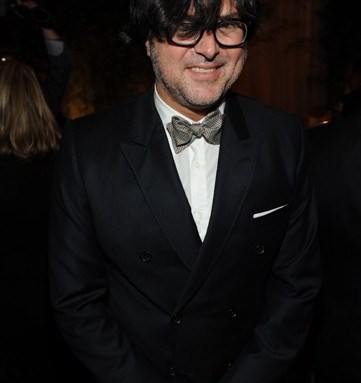 Karl Lagerfeld was the much-heralded guest of honor at Monday’s CFDA/Vogue Fashion Fund gala. But before guests took their seats, he had a fashion crisis to deal with. Lagerfeld’s vintage Chanel diamond feather brooch that was neatly pinned to his slim tie mysteriously went astray, and the designer’s table mates, Diane von Furstenberg and Carey Mulligan — resplendent in Chanel haute couture — were scouring the floor of New York’s Skylight SoHo for it.

“I was talking to Leighton Meester and my brooch got caught in her dress,” Lagerfeld said. “Security found it.”

Lagerfeld wasn’t the only one who took his accessory seriously that night. Many considered them their best asset: Alexa Chung arrived on the arm of finalist Pamela Love, Peter Som came with Christina Ricci, Chris Benz with Keri Hilson, both Joseph Altuzarra and runner-up Eddie Borgo brought along their mothers, and Zac Posen made a grand entrance with reality uberstar Kim Kardashian, who just relocated to Manhattan and has been diving head-first into a local custom. “I’m eating way too much pizza,” Kardashian said.

Thankfully for Kardashian, chicken pot-pie was on the menu at the gala, which had one of the most stellar turnouts in recent memory, including Blake Lively, Mary-Kate Olsen, Ashley Olsen, Jennifer Damiano, Anna Paquin, Mary-Louise Parker, Chace Crawford and Ed Westwick. They were joined by models like Chanel Iman and Karlie Kloss, and practically every designer in town, from Michael Kors and Francisco Costa to Olivier Theyskens, who has been spending more time here now that he is artistic director of Theory. Then there were the 10 finalists who were competing for fashion’s biggest prize for emerging talent, which was celebrating its seventh run and, for the first time, this year came with bronze trophies designed by Rachel Feinstein.

Despite the eye candy, Lagerfeld, who flew into town to give the keynote speech, was hailed the night’s biggest star.

Whether it was Lagerfeld or the fact that she reportedly got a call on her cell phone that night about being cast as Daisy Buchanan in Baz Luhrmann’s remake of “The Great Gatsby,” Mulligan couldn’t contain her jitters. “Why I need to introduce Karl Lagerfeld is beyond me,” she said. “You all know that each and everything he touches turns into creative gold. His collection for Chanel, Fendi, his own label, his photography, his filmmaking, his illustrations, his decorating, his dancing, not to mention his ability to discuss them in just about every language in the world.…He is absurdly cool and I can’t quite look him in the eye.”

Lagerfeld himself stole the show with a heartfelt, off-the-cuff speech that wasn’t short on his usual barbs. He recounted entering a competition by the International Wool Secretariat, and from the 200,000 entries, he won for a coat design, and Yves Saint Laurent for a dress.

“The dress was maybe by Givenchy and it didn’t work out, so he started to work at Dior later,” Lagerfeld said. “In those days, he was completely different. This was when he was 20, and before the days of Pierre Bergé. He was the funniest, wittiest devil you can imagine. You know the fun we had together before things became too serious.”

He went on to recall apprenticing for Balmain and freelancing or working for such houses as Krizia, Chloé and Fendi. “The word ‘young’ was not liked in those days,” Lagerfeld said. “Under 35, you were uninteresting. Now everything is about the young. It’s very dangerous, because the young have to know that one day they may be less young, and if they are less young, people may lose interest. If you’re good, you play last.”

He also had a business lesson or two for the up-and-coming talent in the room.

“It’s a good thing to also struggle and to have money problems,” he said. “I am personally not very good at it, but I admire people who are.”

At least for a short while, cash shouldn’t be as much of a problem for winner Billy Reid and runners-up Borgo and Prabal Gurung. For the first time in the fund’s history, the prize was upped to $300,000 for the top honor, and $100,000 each for the two runners-up.

“I know that the main prize is really the mentoring we provide, but a little cash never hurts,” CFDA president von Furstenberg offered.

After the dinner, the crowd’s night owls, among them Jason Wu, Victoria and Vanessa Traina and Alexander Wang, headed to the Boom Boom Room to toast the winners.