Michael Kors, Jason Wu and others reflected on their nominations. 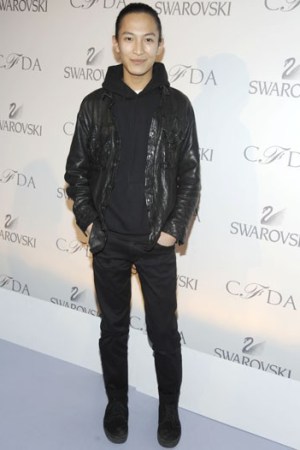 NEW YORK —  “I thought I have to be in a wheelchair hooked up to a respirator to get this,” Michael Kors said. “If you start young enough, you get it young. It will be 30 years next year.”

Kors was talking about the Geoffrey Beene Lifetime Achievement Award that the Council of Fashion Designers of America is bestowing on him in June, and announced, along with other nominees and honorees, on Wednesday night at the DVF Studio.

The venue was filled with many industry types, including Alexander Wang, who is nominated for this year’s Womenswear Designer of the Year Award, Menswear Designer of the Year nominee Michael Bastian, as well as Phillip Lim, Narciso Rodriguez, Vera Wang, Elie Tahari, Chris Benz, Gilles Mendel, Richard Lambertson and Andrew Rosen.  Several of the nominees for the Swarovski award, which honors up-and-coming talent, also made it to the party, including Prabal Gurung, Jason Wu, Simon Spurr and Richard Chai. “This is
the ninth year for us, and it gives me a sense of how time flies, because the new nominees are so young,” said Nadja Swarovski, the crystal company’s vice president of international communications who spearheads the
partnership with the CFDA.

Several people arrived just after the announcement started, including Kors.

“It’s not good to have an office near Fifth Avenue on St. Patrick’s Day,” Kors said.

Wu, a nominee for this year’s Swarovski award for women’s wear, was also stuck on 53rd Street and Fifth Avenue, smack in the middle of the day’s festivities. “They were just saying my name just as I was walking up the steps,” Wu said.

Although the event was scheduled on the Irish holiday, there was no green beer on offer, and few of the revelers dared to don a green outfit. “I see a lot of black,” Peter Som observed. “I guess black is the new green.”