The initiative came about in conjunction with Bloomingdale’s and the NFL, to honor Super Bowl XLVIII being held in the New York area next month. 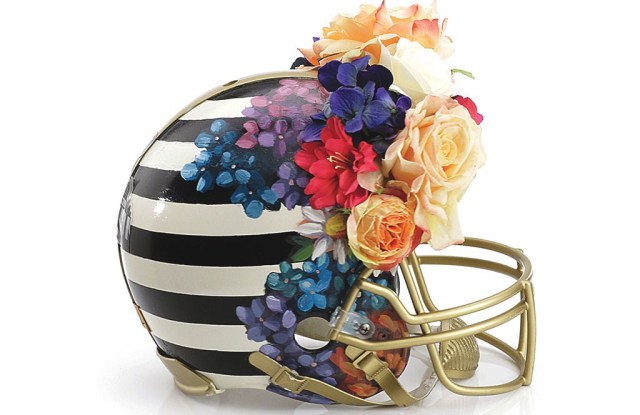 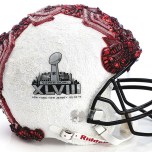 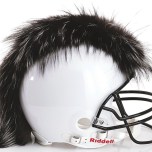 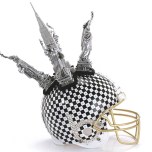 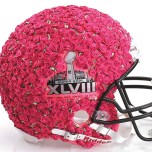 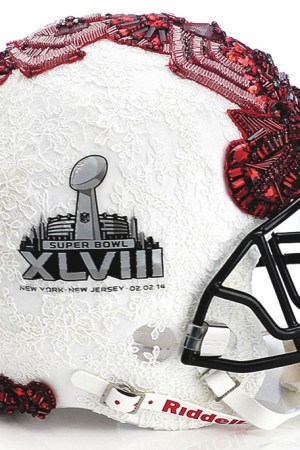 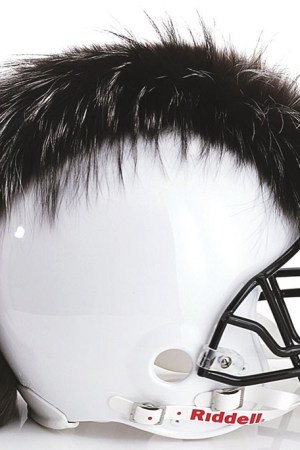 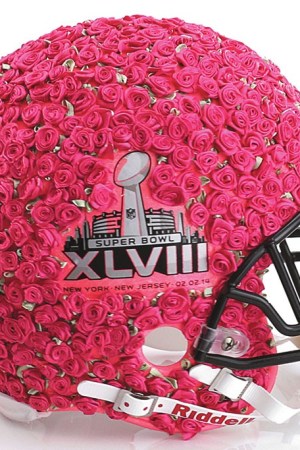 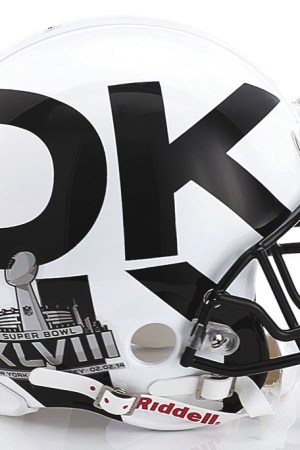 The roaring panthers, bucking broncos and lightning bolts on the macho helmets of surviving NFL playoff teams have been upended by happy florals, Mohawk streaks, moody embroidery, faux stretchy mesh and even a twinkling touch of Swarovski.

This story first appeared in the January 7, 2014 issue of WWD. Subscribe Today.

Fashion has finally landed on the gridiron, via a freewheeling array of 48 “haute couture” football helmets as part of the New York area’s inevitable Super Bowl frenzy, given its host status for this year’s game.

They’re one-of-a-kind helmets styled by members of the Council of Fashion Designers of America in conjunction with the National Football League and Bloomingdale’s, which also had its window design team create one of the helmets — a most treacherous one, with protruding miniatures of the Empire State Building and Statue of Liberty that could do a lot of damage on the playing field.

Nicole Miller went feminine with a floral arrangement and stripes inspired by her spring collection; Dennis Basso didn’t go quite so soft, creating a helmet in fur, Mohawk-style, like a style-conscious warrior, while John Varvatos has a metallic, riveted look on his headgear, inspired by the gridiron gladiators. “Steel and rivets! What’s tougher?” noted Varvatos.

And Marchesa designer Georgina Chapman was unabandoned with her own artistic expression, creating a dark, almost neo-Gothic helmet covered in intricate embroidery and crystal accents. A native of England, Chapman knew practically nothing about American football until she got married to Harvey Weinstein. “He’s a huge Jets fan,” said Chapman, who regarded the project as “particularly fun — a football helmet is such a departure from what we normally design at Marchesa.”

On Jan. 15, with professional football’s postseason already in progress, Bloomingdale’s will unveil the helmets in the windows of its 59th Street flagship and online, and begin auctioning them off to support the NFL Foundation. The auction runs through Feb. 4 on bloomingdales.com/superbowlhelmets. Bidding on the helmets opens at $248, recognizing that it’s Super Bowl XLVIII.

But Bloomingdale’s, a leader in fashion, has hardly been the go-to store for team jerseys or sporting goods. Fashion and football generally just don’t mix. That is unless it’s off the turf, as with Belk, for example, which has an exclusive men’s wear line with Cam Newton, the scrambling, tackle-evading quarterback of the Carolina Panthers, who are in the playoffs.

At Bloomingdale’s, “I don’t believe we have ever done a major collaboration with the NFL before this,” said Frank Berman, executive vice president of marketing. “Sports isn’t necessarily our strong suit. Certainly, players have made appearances for fashion labels, charities and special events. But there’s never been anything of this magnitude. The biggest piece is the collaboration with the NFL and CFDA.”

The Super Bowl, as Berman indicated, is more than just a championship game. “It’s one of the biggest cultural events in the U.S.,” he said. “It’s pop culture, and to be part of pop culture really is in our DNA.”

It’s also the right year for the New York-based Bloomingdale’s to really tie into the Super Bowl, considering it will be played in the New York area for the first time, at MetLife Stadium in East Rutherford, N.J., on Feb. 2. Bloomingdale’s considers New Jersey its backyard.

The NFL saw a wider playing field for marketing, given the density of retailing in the New York area. “This is the retail capital of the world, and we took the opportunity to be totally unique,” said Natara Holloway, the NFL’s vice president of consumer products, brand, marketing and retail. Holloway said that although the league works with many retailers to sell its football and Super Bowl merchandise, Bloomingdale’s was not one of them, until this year. “This will allow us to reach a whole new set of fans and see the Super Bowl from a totally different perspective,” she said. “We have a retail development program, but there was no one in the luxury department store space.”

Macy’s will have the official NFL Super Bowl shop — a 36,000-square-foot area at its Herald Square flagship. That’s also the starting point of “Super Bowl Boulevard,” a conglomerate of local music, food and fan events that will run up Broadway to 47th Street for four days prior to the game. “Fashion and football can go together,” Holloway said.

All of the net proceeds from the winning bids on the helmets will benefit the NFL Foundation, which through grant programs supports youth and high school football programs, health and safety efforts, as well as community health initiatives, including NFL Play 60, which advocates for physical activity and nutrition and fights child obesity.

For the Jan. 15 helmet unveiling, Bloomingdale’s will have a tailgating party with a turnout of NFL players and CFDA designers. The windows will have an interactive component, enabling viewers to “virtually” see how they would look wearing some of the helmets. Bloomingdale’s is also staging a sweepstakes for a chance to win apparel and home merchandise and a $1,000 Bloomingdale’s gift card.

While the $248 opening bid price on the designer helmets seems low, Berman said, “We have a lot of experience with auctions. We tend to set the opening price low, and then it escalates. I think the helmets will sell for a lot more than what they open at.”

Each designer received an official white NFL helmet, made by Riddell, a sports equipment firm, and given free rein on what to do with it. Bloomingdale’s is a supporter of the CFDA Foundation and scholarship program.

“We left the parameters really wide open,” Berman said. “I’m blown away by the amount of creativity that went into the helmets. Some of them are incredible pieces of art.”

“The designers really went all out, from vintage-looking helmets to statements with color, flowers, sequins, and Swarovski crystals,” said Steven Kolb, chief executive officer of the CFDA. “It’s been a fun opportunity to be involved in something that celebrates this huge event in New York, short of being on the 50-yard line and watching the game itself.”

“Most interpreted their signature fashion designs into their helmets, making them identifiable yet creative and one-of-a-kind,” added Holloway.

“The idea of bringing a female touch to something masculine was very interesting to me,” said Miller. Though she doesn’t follow any specific teams, “I always like to see the colors in the uniforms.”

Snyder, who used men’s wear fabrics for his helmet, said, “I love sports and played football all through high school. The fact that the Super Bowl will be in the best city ever this year is cool enough, but then thinking of doing a special helmet seemed even better. This project combines my love of sports and love of tailoring.”

Michael Bastian said, “It was a lot of fun doing this knit Super Bowl helmet with ears — we work with this great hand-knitter in New York, Josh Bennett, and somehow he never even flinches when we throw him crazy projects like this.”

“I had an urban industrial warrior in mind. I wanted the design to be clean and stark,” said Richard Chai.

Already, Bloomingdale’s is thinking about Super Bowl XLIX. “If the right opportunity presented itself, I could easily see ourselves doing another collaboration,” said Berman. “This year, the stars all seem to be aligned, with the Super Bowl in New Jersey, us being New York-based and the designers being here.”