Marc Jacobs, Francisco Costa of Calvin Klein, and Lazaro Hernandez and Jack McCollough of Proenza Schouler have been nominated for the 2008 Womenswear Designer of the Year award by the Council of Fashion Designers of America. 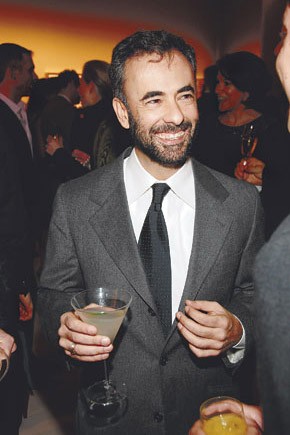 NEW YORK — Marc Jacobs, Francisco Costa of Calvin Klein, and Lazaro Hernandez and Jack McCollough of Proenza Schouler have been nominated for the 2008 Womenswear Designer of the Year award by the Council of Fashion Designers of America.

Nominees for the Swarovski Award for Womenswear are Kate and Laura Mulleavy of Rodarte, Alexander Wang and Thakoon Panichgul. For men’s wear, they are Scott Sternberg of Band of Outsiders, Tim Hamilton and Patrick Ervell. The Swarovski Award for Accessory Design will be decided among Philip Crangi, Joy Gryson and Justin Giunta for Subversive Jewelry.

The nominees, as well as recipients of the honorary awards, were confirmed Monday at a meeting of the CFDA board and unveiled Monday night at an event hosted by CFDA and Swarovski at the Rooftop Gardens on top of Rockefeller Center.

The 2008 CFDA Fashion Awards will take place at the New York Public Library on June 2, and will be staged as a theater-style show followed by a dinner at the adjacent Bryant Park Grill. Swarovski is underwriting the event for the seventh year.

Fran Lebowitz will be the evening’s emcee.

In related news, the CFDA sent out a letter last week from president Diane von Furstenberg and executive director Steven Kolb firmly stating its intent to move the New York shows to the second Friday of February and September, beginning next year.

As reported, von Furstenberg had reached out to Didier Grumbach, the president of the French Fashion Federation; Mario Boselli, the head of the Italian Chamber of Fashion, and the chief executive of the British Fashion Council, Hilary Riva, in December to state the American plan for shows through 2010 and beyond. For this coming September, when Labor Day falls on Sept. 1, New York proposed to start its fashion week two days later on Sunday, Sept. 7, as opposed to a Friday, Sept. 5 start, but this plan hasn’t come to fruition.

The New York schedule “will not change as soon as we would have preferred,” stated the letter. “Upon learning that the dates for the European shows will remain the same in September 2008, we had to re-evaluate the plans that were initially discussed. New York cannot shift back two days; to do so would unfairly compromise London’s shows.”

The September shows will now run from Sept. 5 to 12, but the CFDA is making a proactive decision and will be moving its dates to its desired schedule next year.

Kolb said the CFDA needed to change the dates to accommodate the wishes of the American industry, from designers to retailers and editors.

“In the end, Diane and I decided that the extra two days this September would be more confusing, so we will continue to have the early start,” he said. “Also, had we gone later, it would have squeezed London to a shorter period, based on Paris and Milan having set their dates already, so out of respect, we didn’t go Sunday to Sunday.”

Kolb said the letter was sent in the “spirit of cooperation.”

“We remain interested in coming up with an international calendar that works for everyone,” Kolb said. “And at the same time, we have the direction from our designers to start later. Unless Milan and Paris move back, this will create a situation for London that we are aware of. This is a year away, and each city has to look at the city before and after them when they schedule their dates.”

Kolb said one possibility would be to consider scheduling “crossover dates,” with the beginning and end of fashion weeks in each city earmarked for designers that are more relevant locally, for instance.

“We continued to have conversations with other cities, and they have known our desire to start later, and at some point, we have to be accountable to our designers and the American fashion community,” Kolb said. “We think that a year ahead is enough time to look at the calendar and see if there could be crossover dates.

“The only way it’s going to happen is for us to start doing it,” he added.