“Impact: Fifty Years of the CFDA” opens at The Museum at FIT on Friday. 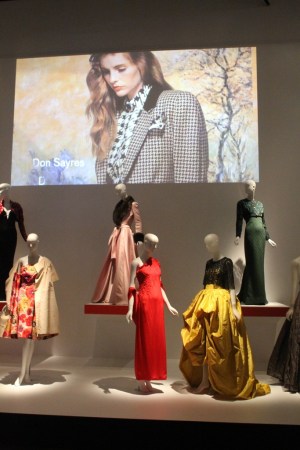 NEW YORK — Fifty years ago, the Council of Fashion Designers of America gave a platform and voice to U.S. designers who had largely worked for manufacturers and had little fashion authority, let alone name recognition.

“Impact: Fifty Years of the CFDA,” which opens to the public at The Museum at FIT Friday, showcases just how much things have changed since Eleanor Lambert founded the group in 1962. The exhibition — a collaboration between the museum and the CFDA — doesn’t only celebrate the organization’s milestone; the 70 garments plus a smattering of accessories on display also showcase how American style came into its own during the half-century.

During a walkthrough of the installations on Wednesday morning, CFDA president Diane von Furstenberg explained why she thought that “Impact” was the most appropriate name to sum up American design since the CFDA’s founding. “It’s what American fashion is — to the point, pragmatic but with an impact,” said von Furstenberg, whose animal print wrap dress, circa 1974, is featured in the show. “For someone like me who wasn’t born in America, ‘Impact’ almost sounds like a 1950s American car. That’s what America is about. It’s about precise fashion, and not fashion for the sake of fashion. It combines fashion and street, and fashion and life.

Unlike a typical fashion retrospective, the CFDA reached out to 400 active designer members to each submit one specific look they felt best represented them or made the most impact on their careers. The exhibition’s curators — Patricia Mears, the museum’s deputy director, and Fred Dennis, its senior curator — made selections for the designers who have died.

The garments are displayed graphically along two of the museum’s walls, with the other two featuring evening vignettes and video projections that showcase the work of members whose pieces are not featured. (With nearly 600 CFDA members in its 50-year history, the organization was challenged to narrow down the number of styles that could fit in the space.)

While there is no strict thematic approach, Mears tried to arrange the looks in ways that would complement each other. The exhibition represents nearly every major American designer over the past 50 years — starting with a Sixties graphic coat by Pauline Trigère and a giraffe-printed one from Donald Brooks, then moving into slinky American sportswear from Calvin Klein, Halston, Ralph Rucci and Michael Kors. There’s also an iconic ensemble from Donna Karan’s seven easy pieces concept in 1985, and Americana-inspired looks by Mary McFadden (1979) and Ralph Lauren (1981). Eveningwear is displayed by designers such as James Galanos (1967) and Carolina Herrera (2004), with men’s wear from Thom Browne (a pheasant feather and wool suit from 2008) to Stan Herman, who selected a FedEx suit he designed in 2005.

Marc Jacobs wanted to feature a look from his 1993 grunge show for Perry Ellis, but since he didn’t own any of it, Anna Sui offered a dress from her private collection, which is displayed near one of Sui’s hippie-inspired dresses from last year. Narciso Rodriguez, meanwhile, chose the black and red dress Michelle Obama won the night Barack Obama won the presidential election in 2008.

Some designers stuck with their most recent runway outings: Oscar de la Renta submitted a billowing gold gown and a black lace top from his spring collection, while Rodarte’s Kate and Laura Mulleavy offered their dress with a sunflower motif; Vera Wang sent a black wedding gown from her last bridal show.

Given the limited square-footage of the museum, CFDA chief executive officer Steven Kolb said they needed to be selective. “Not all the CFDA members could be included on the gallery floor, so we created an interactive directory of all members presented on 10 iPad stations throughout the exhibit.” There’s also a “kaleidoscope” projection of all the members on the south and north walls of the main gallery.

An adjacent media room allows visitors to scroll through iPads for a time line of the CFDA with key American fashion moments, information on all CFDA members past and present, and a 120-minute long video projection of designer runway shows. Another screen showcases real-time tweets of visitors about the collection via the #impactcfda hashtag.