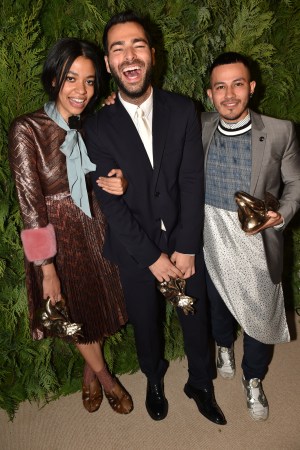 At the risk of stating the obvious — and being indelicate in doing so — the12th annual CFDA/Vogue Fashion Fund dinner was all about the money. The event, held Monday night at Spring Studios in New York, was the culmination of the four-month fashion boot camp during which the 10 finalists all but pledge their first born to Vogue and the CFDA in exchange for the chance at $400,000 and a year of mentorship ($150,000 for the runners-up).

But, surprise! When Amanda Seyfried took to the stage with Riccardo Tisci, who was the evening’s inspirational designer of the year, to unveil the winner, she revealed a change of plans: There would be three winners instead of one, and each would receive $300,000 and a year of mentorship. No runners-up this year, just winners and “finalists.” In the former camp was shoe designer Aurora James of Brother Vellies; Rio Uribe of Gypsy Sport, and Jonathan Simkhai. In the latter — Baja East, Baldwin, Cadet, CG, Chromat, David Hart and Thaddeus O’Neil.

The decision to up the money and the number of winners was reached that morning, according to Steven Kolb, president and chief executive officer of the CFDA. “What happens in this process is, throughout it the judges confer in side conversations — ‘Who did you like? Who did good?’” said Kolb. “There was a point last week where we were like, ‘We don’t know who’s going to win this,’ so the idea of rethinking the winners was something we began to consider but we didn’t know until this morning that we would actually do it.”

Everyone had their favorites. Before the winners were named, Andrew Rosen, a member of the CFDA/Vogue Fashion Fund selection committee, hinted that Brother Vellies was his pick. At the after party at Sixty SoHo, Diane von Furstenberg, CFDA chairman, was diplomatic about the evening’s proceedings “It was very sweet. They’re a very diverse group,” she said, before making special note of finalist Becca McCharen of Chromat.

McCharen and her fellow finalists could take solace in the fact that the Fashion Fund doesn’t abandon its alumni. In fact, participation seems to guarantee career-long membership in an elite club, plus at least one free chicken pot pie dinner — an event tradition — a year. The room was filled with former winners, runners-up and finalists, including Thom Browne (2005), Joseph Altuzarra (2011), Derek Lam (2004 and 2005), Shane Gabier and Chris Peters of Creatures of the Wind and Pamela Love (both 2011).

“It’s a great initiative,” said Gabier after the awards presentation. “And $300,000 — Pamela [Love] and I were saying that we might want to reapply.”

Of course, there was more to the night than dollars. When James, who produces her shoe collection in Africa, accepted her award, she urged the powerful people in the room “to really involve Africa in the conversation instead of just taking inspiration from them.” Uribe, whose bio in the program was summarized by “American male, ’80s baby, born in Los Angeles to teenage immigrants,” talked about acceptance. “I’ve been interested in this world for so many years and growing up I always felt like I was wrong because I wanted to be part of a world that maybe didn’t want me,” he said. “I started Gypsy Sport to make something that was more inclusive of people who were different sizes, different colors, different races — whatever it is. People have started opening doors for me and I feel like I can open doors for others.”

Then again, there wasn’t a working designer in the room who didn’t know the power of the buck, Tisci included. During a Q&A with Vogue’s Hamish Bowles, Tisci talked about accepting the position of creative director at Givenchy. “I didn’t really want to take the job. I was completely panicked about it,” he said. “I came from a very simple family and that was the reason I said yes to this job.”

“For the money?” asked Bowles

“Yes,” said Tisci. “And I don’t regret it. Thank god I did that, because the moment I signed, life changed.”