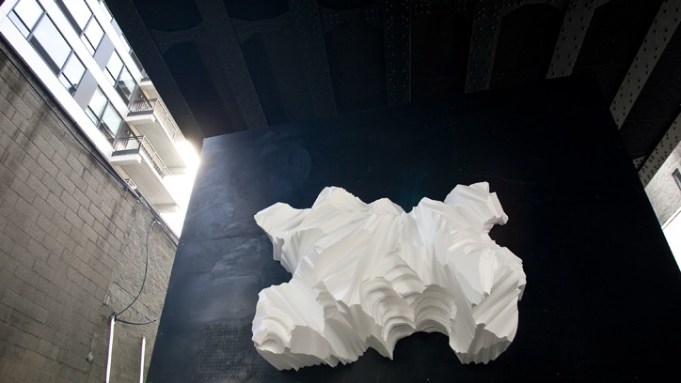 CHAI’S COLD SHOULDER: Richard Chai and Snarkitecture teamed up to design a cavelike installation that doubles as a pop-up shop. Faintly glacial-looking, the space is the fourth installment of Building Fashion at HL23, and will be up and running at 504 West 24th Street through the end of October. The designer is a fan of Snarkitecture co-founders Daniel Arsham and Alex Mustonen’s work, but the first plan looked too much like a regular store. “I wanted it to feel more like an exhibition than a display of clothes on a rack,” said Chai, who first dove into design at the age of 13 at Parsons’ night school.

Richard Chai Love items and men’s wear pieces are strategically folded and draped in the new space. “It’s good, it looks like a glacier. It’s the fall collection, so they will want to buy clothes,” said Chai, who is now more eager than ever to open a freestanding store next year.

DRIES DINING: Dries Van Noten doesn’t make it to New York too often, but when he’s here he likes to maximize his time. “I am always going uptown, downtown, uptown, downtown,” Van Noten said at Bergdorf Goodman, where the designer feted his new men’s and women’s shops with cocktails followed by an intimate dinner at BG. Van Noten sure knows how to charm his dinner guests — just ask anyone who attended his memorable fashion-show- cum-dinner in 2004 — and Wednesday night was no different. A string quartet from The Juilliard School welcomed guests like Iris and Carl Apfel (in matching Mr. Magoo glasses) and Maria Cornejo, who is a friend of the designer. “I have known Dries for 24 years,” Cornejo said.

BUONA NOTTE SAKS: It’s one big Italian lovefest over at Saks Fifth Avenue these days. Just as Diego Della Valle has been upping his stake in the luxury department store, Saks, in partnership with the Italian Trade Commission and Camera Nazionale della Moda Italiana, has been showing its support for emerging Italian designers all week by hosting trunk shows for Albino, Aquilano.Rimondi, BeeQueen by Chicca Lualdi and Marco de Vincenzo.

“We’ve been working with the Italian Trade Commission and Camera della Moda for a couple of years, trying to figure out how to do something that’s original and new and inspiring to our customers,” said Saks Inc. president and chief merchandising officer Ron Frasch Wednesday evening at a cocktail party to celebrate the Italian designers and benefit Save Venice. “Stores have to be about what’s new not about what’s yesterday. Customers want to know what’s new, new, new.”

And while BeeQueen and Marco de Vincenzo were brand new to the store, Aquilano.Rimondi has been featured in Saks’ third-floor emerging designer atrium for a few seasons. Meanwhile, Albino D’Amato, whose dresses were worn by Save Venice hosts Olivia Chantecaille and Allison Alston, saw his trunk show as a chance to get back in the store, as he was before the financial crisis.

BIGGER FOOTPRINT: Enlarging its presence on tony Avenue Montaigne, Chanel said it plans to open a 6,500-square-foot boutique at No. 51 late next year. The two-level unit, in a space formerly occupied by a Jean-Louis Scherrer boutique, will replace a 3,500-square-foot Chanel fashion boutique across the street at No. 42. However, an adjacent Chanel boutique dedicated to fine jewelry, also at No. 42, will remain. Chanel said the new and larger store, to be entirely renovated and decorated by architect Peter Marino, is to optimize service to its clients. It will showcase ready-to-wear, leather goods, shoes, sunglasses and accessories collections, along with watches and a selection of fragrance and beauty products. Chanel has 169 boutiques in the world.

GUESS GOES ALL-AMERICAN WITH ‘GLEE’: Guess Inc. has scored a budding American icon, who also happens to be a cast member of the hit TV show “Glee.” Mark Salling, the tall, dark, handsome actor who plays the brooding Puck on “Glee,” will stream a bonus song called “Fugitive” from his debut solo album, “Pipe Dreams,” on Guess’ Web site through next March. Los Angeles-based Guess is also helping plug Salling’s album by allowing customers who buy more than $125 in merchandise to download it for free.

The hookup between Guess and Salling seems like a no-brainer, as his key demographic is almost identical to Guess’: teen girls. “He’s an old-school all-American boy from Texas,” said Jenny Ricker, Salling’s stylist.

Guess chief executive officer Paul Marciano, who also discovered Anna Nicole Smith, saw potential in Salling. “His brooding looks and soulful and distinct voice are the perfect pairing to coincide with my vision for the current and upcoming campaigns,” Marciano said. Still, Salling’s teen fans are begging to know: Does this mean we can expect a shirtless Salling modeling for Guess?

DESIGNER RUNAWAYS: It seems like designers visiting Los Angeles this week might have picked the wrong time to get creative with their runway-show venues, since the weather wasn’t cooperating. Gilles Mendel touched down in Los Angeles Tuesday for a Saks Fifth Avenue-hosted spring runway show benefitting Aviva Family Services at The London West Hollywood hotel, but had to scrap plans to show on the roof when the rain refused to stop (they relocated to a ballroom). “Our clients, ambassadors, celebrities and our new partners, The Gores Group, all live here, so this is definitely a place we want to have a store in the future,” he said. But for the short term, Mendel was thinking red carpet (“We will definitely be in the game”) and of taking his brand to the next level. “Now I have the muscle, the enthusiasm and the support from Gores and they are looking to me to be an eclaireur, someone to open new doors for the fashion group,” he said.

Mendel wasn’t the only designer expecting sunshine in Los Angeles this week, but at least Ken Kaufman and Isaac Franco didn’t have to switch venues to present their pre-spring and spring collections Tuesday night. The Neiman Marcus Beverly Hills-hosted trunk show was also held off-site but still indoors at the William Griffin Gallery in Santa Monica’s arts district. “I don’t think many of our customers know where it is,” said general manager John Martens, though enough ladies braved the rain and obscure streets to fill the front rows for the show. Kaufman hinted that their next collection would be “full of contrasts to make things new and exciting,” and offered their take on the upcoming red-carpet season: “A sense of ease, new shapes, more fluidity, less traditional yet not any less of an impact.”

GOOD CAUSE: Convivio, an AIDS charity initiative started by Gianni Versace in 1992, opened a boutique on Tuesday evening at the Fidenza Village outlets, an hour’s drive from Milan. Value Retail, owner of the shopping center, donated the 2,153-square-foot space to the cause at least until yearend, with the possibility of continuing into 2011. The boutique was inaugurated at an event on Tuesday evening where guests included Francesca Versace, niece of the late designer and founder, Eva Herzigova and longtime supporter Franca Sozzani. The store will carry merchandise contributed by major fashion houses and celebrities alike, with vintage pieces in the mix. All revenues from the shop will go toward ANLAIDS, an Italian nonprofit organization against AIDS.