Chalayan Talks Longevity, Celebrity, the Future as He Marks 25 Years in Business

The designer is brimming with plans, including the launch of a full accessories collection for fall 2019, a design project with MIT and more retail stores and product lines. 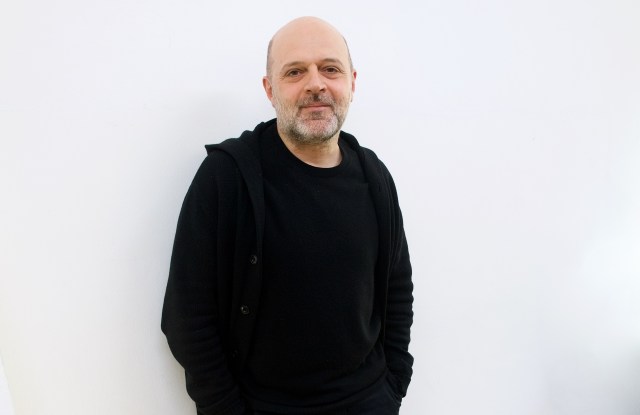 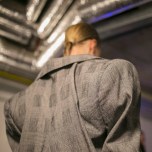 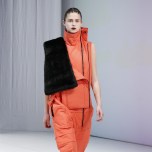 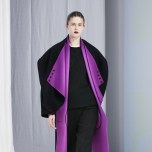 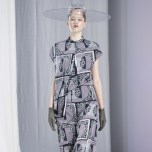 LONDON — One of fashion’s great storytellers and conceptual creators, Hussein Chalayan has always tried to link his designs to history, art, architecture, technology, and popular culture. He was the man who created the telescopic coffee table skirt and the video dress, the one who sent wired, self-transforming creations down the runway.

When he’s not working with wires or wood or LED lights, he’s thinking about history and the human experience. His 2019 resort collection was partly inspired by the myth of the Abduction of the Sabine Women, with the collars on suit jackets made to look as if someone had yanked them downward in a bid to make off with the wearer. Those designs showcased his cerebral leanings, as well as his virtuoso cutting and sculpting skills.

Last year, he took on a minority investor, Centricus, and is brimming with plans, including the launch of a full accessories collection for fall 2019, a design project with the Massachusetts Institute of Technology and more retail stores and product categories. Here, the restless designer, who has also held lead creative roles at brands as diverse as Asprey, Puma, Vionnet and Tse Cashmere, looks back — and ahead to new adventures.

WWD: How have you managed to last so long in a city that has long been brutal for independent brands?

Hussein Chalayan: I think one of the reasons I was able to last this long was the multidisciplinary approach I have. We’ve done six solo museum shows, we do other kinds of projects. That has kept me in touch with other worlds. I think the collaborations and the consultancies have also really helped because your own work generates other work.

WWD: What have you learned over the past 25 years?

H.C.: I think the easiest thing is to compare yourself to other people, but you mustn’t, because you have your own evolution, your own momentum, and then you realize you’re in it for the joy of doing it. You need to learn what you are you about, who you are as a designer. You need to judge your success within the realms of your own reality, really. You can’t judge your success compared to others. Having said that, we designers may all be in the same market, but with different kinds of investment structures — and I find that absurd. I could be sitting next to a celebrity designer who has millions and millions to spend on their brand.

WWD: How has it been going with your new investor?

H.C.: We’re still in early days, but I have a good rapport with them. We’re not part of a big fashion conglomerate, so I think we still have to be very careful in our decisions, but I think our investor has added energy and new angles. The hardest thing about being an independent designer is that it’s a sort of prison. You are restricted in what you can do. But being part of a big conglomerate is also a prison because then you are restricted to performing on a certain level. I think you’ve got to find a way in-between.

WWD: You started your business in the mid-Nineties, before social media and e-commerce. Has life in the digital age been easier for you?

H.C.: What used to happen in the non-digital era was that your [public] image was very much based on the choices that editors made. Journalists and fashion editors were able to project you as an avant-garde designer, so you were reduced to their vision of you, to being a certain entity. Once the digital era came along, everyone could see everything you were doing, so it created a democratic scenario. Designers could reach more people. For years we were doing collections where 90 percent of the things were wearable — and selling — but, before digital, people would only remember you for the table skirt or the motion dresses.

WWD: The democratization of fashion in the digital age has also brought challenges. Can you talk about some of them?

H.C.: Everybody wants to be a designer, so the status of the [traditionally trained] designer is at stake. What does it mean to actually be a designer? I think you can be a really wealthy person and employ a designer and have a brand — and that’s OK. But what I find peculiar is that the measure of fashion puts everybody into the same box. Everyone’s in the same market and you can be competing with these people, which for me is absurd because you can’t compare budgets.

WWD: What about your thoughts on celebrity or social media star creative directors?

H.C.: It’s bad news for the [traditional] designer, but you have to find a way of dealing with it. You’ve got to challenge yourself. I really challenge myself. I am definitely doing things that, in the beginning, I thought I might not be able to manage. I opened a store, which is such a big responsibility, I am dressing some celebrities that I would not have dressed naturally, but now I’m thinking “Why not?” I did a TED Talk in front of thousands of people a few years ago — and that was very challenging. Risk-taking has always been a big factor for me and I’d like to see more young people do it. A lot of young people, in my view, are living in fear and that’s why I think they repeat or regurgitate the past most of the time. They revisit the past because they can’t take their own risks. Sometimes you’ve got to do things and not be liked so you can grow.

WWD: You’ve been teaching at the University of Applied Arts in Vienna. What have you drawn from your experiences there?

H.C.: I think that we’re living in a really entitled era — you see it in education. I think part of that entitlement is, for me, connected to the digital era because people have access to so much information that it makes them feel like they know things, without really knowing them. To know something you have to research it. You’ve got to read into it and just by Googling something, it doesn’t mean you really know it. Young generations need to know about the history of fashion, the history of art and about the designers that have planted so many seeds. If you are a creative person who is interested in clothing and creativity then you need to know what happened in the past.

I think that celebrity and reality TV culture create a certain aspiration for people. They feel “If he can do it, I can do it.” This, combined with a sense of entitlement, means we are going to get very unhappy people in the future. Part of the satisfaction in life is to build things yourself through merit, rather than it being given to you on the plate.

WWD: You’ve had your shop on Bourdon Street in Mayfair since 2015, and have been using it as a show space for men’s and a venue for events. How is it enhancing your business?

H.C.: I have got to learn who my customers are. The shop has become a response mechanism, where I can really meet people and see the different kind of profiles that appreciate our collection. That has been, for me, the most enjoyable thing in the last years. I think I have enjoyed that more than the press attention because you are seeing the people themselves, and how they live and then how they integrate your clothes into their wardrobes and why they are liking it. It is a really satisfying thing.

WWD: Aside from the accessories launch, what other plans do you have for the business in the medium-term?

H.C.: We would love to have other stores in other regions, new product categories and new kinds of collaborations. I would like to help young people more, somehow, maybe through education but in other ways as well. I’d like to empower other artists as well, and collaborate with them or show their work in our store to support them. I guess after a certain age you want to help others. I guess it also has to do with my family background; it is very much a part of my upbringing. As you gain experience, it feels natural to want to share that.