Few designers' work lends itself so easily to a conceptual context as that of Hussein Chalayan. 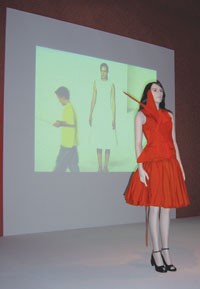 WOLFSBURG, Germany — Few designers’ work lends itself so easily to a conceptual context as that of Hussein Chalayan, nor are there many fashion makers so readily at home in the world of contemporary art. The London-based Turkish-Cypriot is representing Turkey at the Venice Biennale.

So it is no surprise that the first solo exhibition of Chalayan’s work fits so seamlessly and convincingly into the very modern environment of the Wolfsburg Art Museum. Originally conceived by and presented at the Groninger Museum in northern Netherlands, the show moved to Wolfsburg (the town Volkswagen calls home) over the weekend, where it will run through Feb. 15. An English-language catalogue published by NAI Publishers, Rotterdam, accompanies the show.

The retrospective begins with the rust-encrusted buried dress from Chalayan’s graduate collection for London Central Saint Martin’s in 1993, which was displayed in the window of London retailer Brown’s. It is the only disembodied piece in the grid-like and chronological journey through the topics and concerns, intellectual and stylistic, that have shaped Chalayan’s career.

The broad-cheekboned mannequin throughout the show — which is not only dressed in Chalayan creations from the last decade, but is often engaged in such non-fashion activities as painting a wall, watering olive trees or cleaning a window — looks like she could have spent some time in a museum of natural history. That wasn’t exactly Chalayan’s intention, who based his generic figure on a living model whom he found attractive.

“Chalayan is so interesting to us,” commented Wolfsburg curator Annelie Lütgens, “because of the four primary themes through which he moves.” The first is fashion and technology — Chalayan’s “Before Minus Now” spring 2000 collection, for example, makes use of shape alloys in a dress with a skirt that flares as soon as the electricity is switched on, and features a “remote control dress.”

The second area, Lütgens continued, is performance. Chalayan’s shows are known for their digression beyond normal runway tactics. The furnished room setting of “Afterwards” (fall-winter 2000) is fully reproduced in the exhibit, a video projection illustrating how furniture morphed into apparel in the collection referencing the plight of modern-day refugees.

Indeed, it is the designer’s creative investigation of such sociological and political subjects that constitutes the third point; the fourth is his interest in biology. In “Temporal Meditations” (spring-summer 2004), he worked with a genetic anthropologist to encode his own DNA, which gave rise to a Toile de Jouy print reflecting the historical turmoil of his multicultural background.

A further highlight here is Chalayan’s 2003 “Place to Passage,” a five-screen film installation commissioned by the Tribe Art Commission in partnership with the Lucky Strike B·A·R Honda Formula One racing team. The designer’s fantasy vision of a racing car — an aerodynamic, pod-like structure — is there to see in tangible reality, as is the virtual journey of the animation’s androgynous female passenger as she speeds from London to Istanbul.

“It was important not to turn this into a costume show,” stressed Chalayan, who noted that many of his collections’ idea pieces and accompanying films and animations are on display. “Seeing work in a context like this puts it on a different level — more as objects rather than items to be worn. But at the same time, what’s interesting about showing clothes in an environment like this is that you can spend more time with the clothes themselves. You can take your time.”

He characterized his work as “musings, in a way, and this [show] is a chance to share it with other people. And everyone can interpret it in a different way.”