Challenge and Change in Focus at AAFA Meeting

Executives at the AAFA meeting in Florida said the consumer's desire for quality at a price is the impetus for changes in sourcing and retailing. 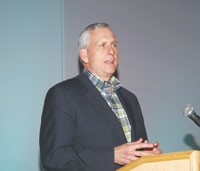 AVENTURA, Fla. — Intense competition among fashion labels, electronics and other brands for the disposable income of consumers has compelled companies to develop faster ways to deliver better fashion at lower prices.

At the same time, the supply chain from factory to cash register has been influenced by two big issues: China’s growing sway over global trade and retail consolidation, industry leaders said.

Top executives who gathered here last week for the American Apparel & Footwear Association’s annual meeting at the Fairmont Turnberry Isle Resort said the consumer’s desire for quality at a price is the impetus for changes in sourcing and retailing.

“Clearly, the consumer is king today and everything is being driven by that,” said Robert Skinner, chairman and chief executive officer of Kellwood Co. “Is the bar getting raised? Absolutely, but they, our retail partners, have to raise the bar to continue to be successful, and we have to respond to that challenge. The consumer has more than enough choice today.”

The executives emphasized that consolidation in the apparel world has a domino effect on the supply chain. Brands and the firms that make them continue to be snatched up by conglomerates such as Jones Apparel Group and Liz Claiborne Inc. Next up in the concentration game will be the factories that make the goods, particularly in China, the executives predicted.

These shifts in the corporate landscape and with consumers have forced brands to reexamine the way they do business.

“We’re consolidating around larger suppliers and the goal is to get a lot of the preproduction processes that we used to do in-house done by suppliers,” said Wes Card, chief operating and financial officer of Jones and chairman of the AAFA.

For instance, most of the sample and pattern making functions for Jones’ moderately priced goods are now performed overseas.

“A lot of the design will be done here from a creative standpoint, but you’ll use a lot of the resources at the factory,” Card said.

Jones is looking for $100 million in cost savings in the next two years, 40 percent of which will come by moving preproduction processes closer to the factory. Performing such functions on site also helps brands work closer to the season, allowing them to be more nimble with fashion trends and, they hope, to come away with more full-price sales, executives said.

“Federated is only going to invest in brands that are selling,” Card said. “If a brand you sell isn’t working over a period of time, they’re not going to keep it.”

“There is no question that the constant pressure on turn and cycle time is forcing marketers and designers to contemplate new business models,” Charron said. “We still waste a great deal of time in the product development process.”

Those changes in the development progress might be the harbinger of other adjustments.

“What’s going on in the industry right now is the contemplation of some very fundamental changes,” Charron said. “What is fashion, but change? We have to manage fashion, we have to manage change.”

Part of that change is a new kind of interaction among brands and retailers, he said.

“It’s a business model that is perhaps based less on leverage and more on collaboration and partnership,” Charron said. “It’s real, true collaboration, and I don’t think any of us have really got it yet, but I think a lot of us are working on it.”

Retailers, including Federated Department Stores Inc., Kohl’s Corp. and Belk Inc., are interested in figuring out how to better cooperate with brands, he said.

Efforts to establish a better working relationship and understanding are vital, said Kevin Burke, president and ceo of the AAFA.

In his role at the AAFA, Burke spends much of his time in the political realm, however. Jim Leonard, deputy assistant secretary of textiles and apparel at the Commerce Department, was at the meeting to discuss U.S. trade policy.

“China is going to be at least an 800-pound gorilla,” Leonard said. “It’s certainly going to be a major factor. It’s a little difficult to say exactly how big they’re going to be.”

Leonard spoke on a panel moderated by Claiborne senior vice president Bob Zane, who reiterated his prediction that 50 to 80 percent of U.S.-bound apparel will ultimately be produced in China. Last year, China accounted for 26.7 percent of U.S. apparel imports, or 5.9 billion square meter equivalents valued at $15.1 billion. After adding textiles, China’s share of the import market for both categories jumps to 33 percent.

“I don’t know what the number’s going to be,” Leonard said. “I suspect that over a fairly short period of time, it’s probably going to be at least in the 50 percent range; whether its going to be 75 or 80 percent, I don’t know.”

Leonard took part in the negotiations with China last year that produced a three-year import agreement to regulate apparel and textile trade. Whether apparel and textile imports from China will be unfettered when that deal expires at the end of 2008 is an open question, though right now, no other restraints are in place.

Trade policies clearly have an effect on imports, but Leonard suggested that the importers, just by virtue of doing business in the region, also shape the flow of business.

In addition to turning to China and other Asian producers for ways to save money and add value to goods to attract new customers, firms such as Jones and Claiborne seek to grow through acquisitions. Kellwood, which was out of the hunt for the last six months or so during a restructuring, is also looking to be a dealmaker again.

Increasingly, large apparel firms are growing through their own stores. Jones operates a fleet of Nine West and Barneys New York doors, while Claiborne has its Mexx chain and is rolling out stores under several other brands, including Sigrid Olsen. Kellwood, which has about 60 outlet stores, is also getting into the game. The firm will experiment this year with Phat Farm and Baby Phat stores, some in China, and will test some full-price Sag Harbor and Koret doors.