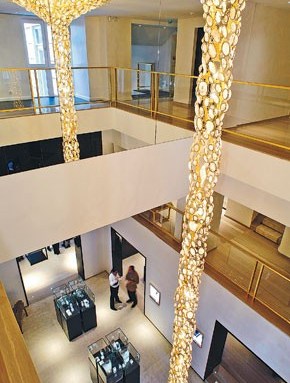 PARIS — Expanding its home on the Place Vendôme, Chanel has reopened its jewelry boutique on the chic square after nine months of renovations.

Architect Peter Marino tacked on an additional 1,000 square feet to the shop by creating an enfilade of selling salons while carving out a view on to the square and opening up an atrium in back, which he outfitted with a monumental bronze and rock crystal chandelier by François Pascal.

Other decorative accoutrements include lacquered Chinese screens and chandeliers in rock crystal by Robert Goossens that hang above sofas upholstered in gold tweed. Artworks by Kees Van Dongen, Francois-Xavier Lalanne and Kami add to the boutique’s rich atmosphere.

Chanel opened the address a decade ago. Mougenot said its renovation reflects robust business for jewelry and watches. Though he declined to pinpoint figures, Mougenot said 2007 was ending on a stellar note, thanks to new wealthy clients from Russia, Asia and the Middle East. He said sales in the United States and Europe were also healthy.

“We’re in expansion mode,” he said. “There are new markets and a lot of wealth in the world. This has been a very good year for luxury. Our only concern for 2008 is currency values.”

Mougenot said Chanel already had increased prices twice this year in certain markets to compensate for the declining value of the dollar and the yen against the euro.

Chanel operates 42 watch and jewelry shops around the world. Earlier this year, the company opened its first boutique in China, in Shanghai, after planting its first flag in Russia, in Moscow, the year before. Coming next year: the first shop in Bahrain.

Mougenot said the Paris shop, however, remains number one in terms of sales. “Even during the renovation, when we were operating a temporary boutique, sales were great,” he said.

Festivities to inaugurate the shop will include a dinner for 100 of Chanel’s best jewelry clients from around the world later this month. There should be plenty of baubles to regale them: A special high jewelry collection has been created to celebrate the renovated boutique.