Chanel Cruise 2018: Greece Is the Word

Karl Lagerfeld unfurled a treasure trove of cultural references for his show in Paris, inspired by Ancient Greece.

By Joelle Diderich
with contributions from Alex Wynne
on May 3, 2017
View Slideshow 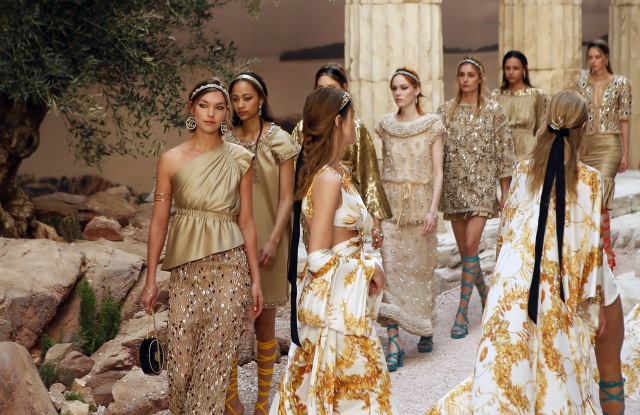 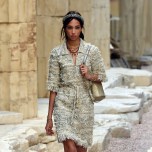 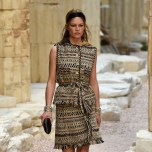 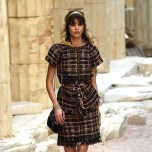 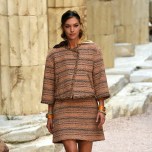 For his latest Chanel cruise collection, Karl Lagerfeld couldn’t find a venue in Greece that he liked — so he brought Greece to Paris instead.

The designer conjured a replica of the Temple of Poseidon in the Galerie Courbe at the Grand Palais, where guests struck tourist poses against a movie-set backdrop of crumbling seaside ruins.

Banks of powerful lights created the illusion of Mediterranean sun, in contrast to the gray and drizzly sky that lurked behind the venue’s skylight, bathing a parade of modern-day goddesses strapped into colorful high-heeled gladiator sandals. After all, Lagerfeld said, it’s all about make-believe.

“It had nothing to do with a country. Reality is of no interest to me. I use what I like. My Greece is an idea,” the designer, who skipped postshow interviews this season, said in notes provided by Chanel.

Keira Knightley, Pedro Almodóvar, Isabelle Huppert and Charlotte Casiraghi were among the 800 guests spread over two shows, each followed by a Greek buffet in the Mini Palais restaurant, which spilled over onto a terrace framed by imposing classical columns— these ones dating back to the 19th century.

The set had Knightley dreaming of a vacation. “That would be nice, but it’s not the case,” said the British actress, who declined to comment on rumors she would reprise her role as Elizabeth Swann in the next installment of the “Pirates of the Caribbean” franchise.

Next Monday, Knightley starts rehearsals for a biopic of French author Colette, directed by Wash Westmoreland. “It covers her first marriage with Willy, who was the guy who took credit for her first four novels. It’s about that relationship and the demise of that relationship,” she explained.

To follow, she said, perhaps a holiday will finally be in order since she has been working nonstop since September. “Hopefully, it’ll look a little bit like today’s show,” said Knightley, who appears in ads for Chanel fragrances and fine jewelry.

Almodóvar had another seaside destination in mind – Cannes, where he will preside over the jury of the film festival later this month. “Today was the last fitting,” he said. “Now I have a different suit for every day. In my life, I’ve never had so many things to wear.”

“The one that fits me well is the more uncomfortable one,” he added, declining to reveal designers. On a more serious note, the Spanish director said the most important part of his role was “to be open and rested” — in order to remain focused through as many as three features a day.

“I’m very curious about many of the movies. I hope that there will be a masterpiece,” he said.

The Chanel show marked the start of cruise season, which this year will take editors to Los Angeles for the Christian Dior show on May 11 and Kyoto for the Louis Vuitton display on May 14. Gucci is to show its collection in Florence on May 29.

By contrast, Chanel — which staged its last cruise show in Havana and in recent years has taken the collection to Seoul, Dubai and Singapore — was marking its sixth consecutive show in the French capital. However, Bruno Pavlovsky, president of Chanel fashion, said this did not represent a change of strategy.

“It’s more a function of recent events, which prompted Karl Lagerfeld to think it made sense to be here in Paris. The end of 2015 and 2016 were difficult times for Paris,” said Pavlovsky, referring to the terrorist attacks in November 2015 that sharply impacted tourism and — by extension — luxury sales in France.

“The decor this season could have taken us elsewhere, but we didn’t find what we were looking for,” he added. Just as it did with its Métiers d’Art display at the Ritz hotel in December, Chanel hopes the show will give the French capital a boost.

It comes less than two weeks after a police officer was shot to death on Avenue des Champs-Elysées, and four days before French voters pick their next president in a general election where far-right leader Marine Le Pen is one of the two finalists. The U.S. State Department this week issued a travel alert for its citizens going to Europe, citing the continued threat of terror attacks.

“The world is uncertain, and this is something we can’t fail to take into account today. We have seen business in Paris pick up since October, but we know it’s a fragile recovery and it could grind to a halt,” said Pavlovsky.

“The elections here are obviously an issue, so we have to remain very cautious over the next few months. We are paying close attention to the economic and political situation and exchange rate variations,” the executive noted.

Chanel had a strong start to 2017, fueled by the launch of its Gabrielle bag, which is bringing a new generation of customers to the brand, Pavlovsky said. At the same time, the brand is enjoying healthy momentum in China, where business has been brisk since the house began to harmonize global pricing two years ago.

With a network of 200 boutiques worldwide, Chanel is well positioned to compensate for any shortfall in European business, Pavlovsky said. It plans to reprise the December show, titled Paris Cosmopolite, in Tokyo on May 31 and to bring its Mademoiselle Privé exhibition to Seoul in June.

As part of this ongoing effort to create “exceptional” experiences for its guests, Chanel hosted a cocktail party at Paris City Hall on Tuesday evening and was offering some attendees one-of-a-kind opportunities, such as meeting a Paris chef.

“There isn’t a single program for everyone. It’s designed according to [guests’] individual wishes,” Pavlovsky said. “Our aim is to be able to continue to seduce them, but I think what they are looking for is to participate in the development of the brand. They want to be included.”

Wednesday’s fashion show — titled “The Modernity of Antiquity” — was conceived as an imaginary voyage to an idealized Greece.

Lagerfeld worked a pastoral vibe via tweed tunics with frayed edges, burlap pleated skirts and coarse cream knits, which he contrasted with a Midas-like trove of jewelry and embellishment, such as gold coin buttons, amphora-shaped earrings, jeweled hair clips and a killer pair of sunglasses trimmed with gold laurel leaves.

Echoing the fictional setting, the palette ran from Earth colors to pale mineral tones, including summery whites, pale pastels and matte metallics, with a smattering of navy and black — this was Paris, after all.

A knit column dress with trailing black shoulder straps came in a pottery-style terra-cotta-and-black frieze pattern, while the fabric strips handwoven into a tweed tunic produced a vibrant shade of Ionian blue. Crinkled crepe toga dresses, topped with sequin-encrusted corset belts, were as pristine white as the seaside houses in Greek villages.

Lagerfeld nodded to a different era’s obsession with the Grecian aesthetic with draped jersey nymph gowns that brought to mind Isadora Duncan, the high priestess of modern dance. Pleated palazzo pants and ample tweed coats also projected a sense of ease, a shift from the hobble skirts of his recent spring couture show.

“I see Greece as the origin of beauty and culture, where there was a wonderful freedom of movement that has since vanished,” he explained.

Of course, freedom of movement these days might also be read as the liberty to navigate between high street and couture — as attested by the presence of H&M and Topshop on the red carpet at this week’s Met Gala in New York.

In keeping with the times, Lagerfeld proposed a deconstructed approach to luxury, pairing a white eyelet cotton cropped top and pants with an oversized tweed jacket, or contrasting his burlap skirts with bodices dripping with beads, cabochon jewels, sequins and pearls.

He injected a dash of hip-hop swagger with a gold leather sweatshirt and shorts, gilded arm bracelets and body-con tube dresses in ribbed intarsia knits. Foliage crowns were used as the basis of a baroque scarf print, which was splashed on billowing chiffon capes, jarring with the general mood of faux simplicity.

“The criteria of beauty in ancient, then classical, Greece still holds true. There have never been more beautiful representations of women. Or more beautiful columns. The entire Renaissance, in fact, was based on Antiquity. It is really about the youth of the world in all its power and unpredictability — just like the unforgiving gods,” he said.

Per tradition, there was a link between the season’s theme and the personal mythology of founder Gabrielle “Coco” Chanel, whose strong personality and glittering circle of friends has been a steady font of inspiration to Lagerfeld since he took over as couturier in 1983.

The invitation featured a headless Greco-Roman statue of Venus, which is kept in Chanel’s apartment at the brand’s headquarters on Rue Cambon. The show notes pointed out that Chanel also designed the costumes for French poet Jean Cocteau’s revival of the Greek tragedy “Antigone” in 1922.

Lagerfeld is no stranger to a Greek theme. His photographic oeuvre includes a series of glass panels portraying “The Voyage of Ulysses,” as well as his interpretation of the classic romantic novel “Daphnis and Chloe,” featuring models including Baptiste Giabiconi and Bianca Balti in pleated white togas.

“I’m expressing through fashion a fascination I’ve had since childhood. The first book I read was Homer,” said Lagerfeld, who discovered the story of the Trojan War aged seven in a volume set “bound in slightly lilac-hued leather with Greek motifs stamped in gold and a neoclassic graphic style.”

In an age of Insta-gratification, it made for a powerful ode to culture with a capital C. After all, who still studies the Ancient Greeks today — let alone references Minoan civilization in their show notes?

The famously erudite Lagerfeld, who owns more than 300,000 books, had a word of caution for younger generations as they hurtle into a technology-obsessed future, while the established political order crumbles around them.

“I’m suggesting going back to move forward,” said Lagerfeld. “To create the future, you have to pay attention to the past.”

The designer risked fanning speculation about his own future by keeping a low profile after taking his bow with his godson Hudson Kroenig, who modeled one of the looks. Lagerfeld did not attend the first post-show cocktail, and stuck to a private section after the second show.

Chanel, which is owned by the secretive Wertheimer family, last month took the unusual step of issuing a statement to WWD denying ongoing speculation that it was plotting a move into men’s wear with Hedi Slimane.

“I see Karl every day. I work with him every day and there is no major change in his way of approaching things,” said Pavlovsky.

“There is no plan regarding a succession, and in any event not with Hedi Slimane, as has been made mention of,” he added, noting that it wasn’t the first time that Lagerfeld had declined to do interviews after a show. “I don’t think you should read anything into it. I think the collection speaks for itself.”

All The Looks From The Chanel Cruise 2018 Show in Paris