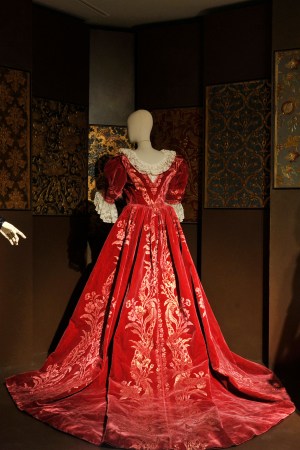 Women’s waistlines rise and fall like the puck on a carnival high striker. Sleeves balloon and deflate during the so-called romantic period, while skirts seem only to expand across the 18th and 19th centuries, bulging to the size of a walk-in closet and supported by cruel wire crinolines.

By contrast, men’s vests performed an incredible shrinking act, from long, loose and flaring around 1700 to short and body-hugging by 1800.

The task of narrating and decoding this dizzying shape-shifting fell to Pamela Golbin, chief curator of fashion and textiles at Les Arts Décoratifs, who opted for a chronological showcase that mingles treasures from the national costume archives — from Napoleon’s coronation stockings to a hooded sweatshirt right off Vetements’ fall runway — along with rare furnishings, wallpapers, toys and objects from the museum’s other collections.

Titled “Fashion Forward, Three Centuries of Fashion” and with H&M as exclusive sponsor, the display marks the first time a fashion exhibition has taken over the museum’s grand nave. It opens to the public Thursday and runs through Aug. 14.

Leading WWD on a private visit Monday, Golbin recounted how fashion has always been a signboard for stature, a reflection of changing tastes and lifestyles and — for long periods in history — hugely uncomfortable for women.

As artistic director of the exhibition, choreographer Christopher Wheeldon, who won a Tony Award for “An American in Paris,” created short movies with dancers from the Paris Opera to show the piles of panniers, corsets and petticoats that underpinned a robe à la française, or sack-back gown, the template for women’s clothes for almost two centuries, the volumes swelling from the hips in the era of Louis XIV, and from the derriere under Napoleon III.

Across the displays, set in a series of nooks before culminating on monumental staircases under the soaring ceiling, Golbin has sprinkled fascinating anecdotes, revealing that even restrictive fashion had a practical side. For instance, among the 300 or so ensembles on display are multiple examples of what Golbin called a robe à transformation, a two-piece dress popular in the mid-1800s.

“A fashionable woman could change clothes five to seven times a day,” she explained. “This idea of mix-and-match was very important because these dresses were quite big investments.”

Similarly, under Louis XV, women could alter the appearance of pinch-waist gowns with triangular panels of embroidery stitched or pinned to the stomach.

Golbin included displays of accessories with most vignettes, ranging from Lalique perfume bottles to Empress Josephine’s impossibly narrow shoes. Oddities include the courtly costume for Louis XV’s pet monkey — all the rage at the time — to a paper doll set from 1860 called “Modes Parisiennes,” which itself plays with the evolution of the silhouette and the elaborate nature of period fashion.

The designer era is heralded with two dresses by Charles Frederick Worth, who opened his couture house in 1868. “Up until then, women chose their own style with their choice of fabric, accessories and embroideries,” Golbin explained. “He said, ‘I’m going to create for you.’ All the rules of contemporary fashion started with Worth.” Cue seasonal fashion shows, celebrity designers and the branding era.

Among treasures on display is a cache of outfits by Paul Poiret that announced the umpteenth return of the Empire waistline — and an emphatic rejection of the corset. The modernity of ensembles from the Twenties and Thirties by Chanel, Lanvin and Mainbocher is particularly striking.

The circuit culminates with the coiling staircases, where visitors can gaze up at designer fashions from each post-war decade, from full-skirted New Looks by Christian Dior to an “unwearable” metal dress — and multikilo Plexiglas and feather cape — from Paco Rabanne.

His-and-hers beaded dresses from Jacques Esterel announce the Seventies and remind the visitor that androgyny is not such a new idea. Noteworthy dresses include the buttock-baring Guy Laroche gown worn by Mireille Darc; a caped Emilio Pucci ensemble commissioned by nightclub powerhouse Régine Zylberberg; one of Karl Lagerfeld’s first suits for Chanel, circa 1984, and his sequined tuxedo jacket for H&M 20 years later that ignited the frenzy for high street/designer collaborations.

In a side project, H&M partnered with Les Arts Décoratifs for the latest edition of its Conscious Exclusive line of red-carpet looks made from more sustainable materials. Inspired by the archives of the museum, the 33-piece line is to launch Sunday in around 180 stores worldwide and online.

The museum’s fashion collection spans more than 150,000 items, ranging from ancient textiles and outfits to couture and ready-to-wear creations, accessories, drawings and photographs.