The “Gossip Girl” star has been tapped to be the face of the brand's new Mademoiselle handbag line. 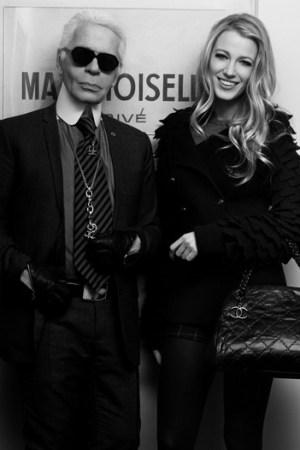 PARIS — This nugget of news — although hardly scandalous — should set the real-world bloggers atwitter.

“Gossip Girl” star Blake Lively, 23, has been tapped as the official ambassador for Chanel’s new Mademoiselle handbag line and will appear in a campaign photographed by Karl Lagerfeld. The ads are slated to break in April magazines.

“She’s a kind of American dream girl,” said Lagerfeld, lauding Lively’s spontaneous nature, freshness and what he described as natural star quality. “I think she will become a great actress.”

He said the shoot, at Chanel’s historic Rue Cambon headquarters, went like a dream. “It was an easy job because everyone fell in love with her,” Lagerfeld said.

American Vogue editor in chief Anna Wintour introduced the actress to Lagerfeld last July during couture week in Paris. The three dined together the night before Chanel’s high-fashion show at the Grand Palais, which featured an eight-ton, 40-foot golden lion as its centerpiece.

Lively related that Lagerfeld gave her a preview of the set after dinner. “I took a photo of him so that I would never forget that moment,” she said. “Never did I think six months later he would be photographing me.”

Indeed, Lively was at a loss to describe the experience of standing on that famous mirrored staircase upon which Gabrielle Chanel sent her models marching — and being photographed there by Lagerfeld.

“How did Cinderella feel when she slipped on the glass slipper? How did Snow White feel when she met her Prince Charming?,” she enthused. “A dream come true is an understatement. I can say that I feel like the happiest, luckiest girl around.”

California-born Lively said she grew up admiring Chanel and what it represents to her: “It is timeless, chic, graceful, intelligent, iconic and ever relevant.”

Lively has quickly catapulted to fame, and the leggy blonde is a front-row favorite at New York fashion shows.

While best known for her Serena van der Woodsen character on the cult CW teen drama, Lively has also attracted acclaim for her portrayal of a hard-edged welfare mom in Ben Affleck’s “The Town.” This summer, she will appear in the hyped superhero drama “Green Lantern,” directed by Martin Campbell.

The oblong-shaped model comes in five sizes, each with Chanel’s iconic chain handle and quilted surface. A wide range of colors, finishes and materials are available, including jersey cloth, satin, calfskin, lambskin, alligator and shagreen.

“Though I am the face of it, I will carry it like every girl,” Lively said of the bag. “I will always feel it’s more than just a purse. It’s a quilted case full of lipstick, love letters and the dreams and possibilities that I have always felt every time I see that beautiful ‘CC.’ ”

Lagerfeld and Chanel have enlisted an eclectic cast of pitchwomen for its handbags in recent years, including Lily Allen, who fronted the brand’s puffy Coco Cocoon line in 2009 and was succeeded in that role by Vanessa Paradis, who also appears in advertising for Chanel’s Rouge Coco lipstick.

Other famous faces to have appeared in Chanel handbag campaigns include Rinko Kikuchi, Anna Mouglalis and Diane Kruger, whom Lagerfeld photographed Tuesday night for a feature in French Glamour.