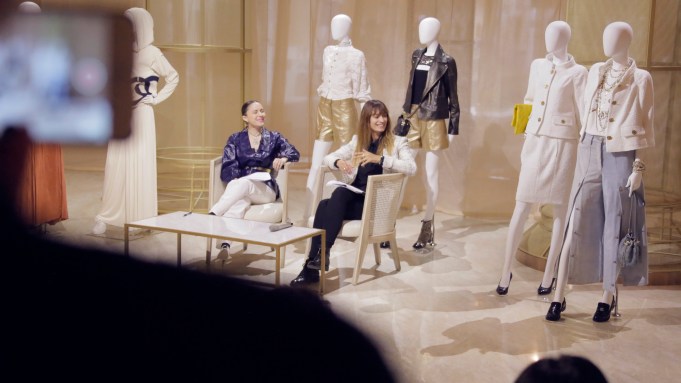 CHENGDU — Chanel headed to the Chinese heartland this past week, pulling out the stops for its Chengdu VIPs. Aside from restaging replica shows of its cruise Greek-themed collection, it assembled a front row and party that included brand ambassadors Zhou Xun, Marine Vacth and celebrities William Chan, Nana Ou-yang and Victoria Song.

It is the third time the house has staged a major initiative in China, after Beijing and Shanghai, and while Chengdu’s demographic is not as mature as the shopper in those cities, it is evolving quickly.

“What is quite amazing and nice for us is that three years ago, we started from scratch [in the city], and now we have several thousand customers,” said Chanel’s president of fashion Bruno Pavlovsky.

Beginning Oct. 25, Chanel built up the anticipation by asking the public to share on Weibo the most interesting spots around town under the hashtag #ChanelinChengdu — an endeavor that garnered over a million in engagement, the brand said.

Fashion blogger Dipsy, who hails from nearby Chongqing, had plenty to recommend in the way of spicy hotpot, the regional tongue-numbing specialty, promising that Chengdu is a town where one can continue eating “from daytime until past 3 a.m.,” while actor-singer William Chan’s pick was the Upper Gallery, a restaurant inside the Taikoo Li complex.

In a country where WeChat reigns supreme, Chanel created QR codes that attendees could scan on their smartphones in order to gain entry to the show, staged twice on Nov. 7 for an audience of 550 each.

“When people are traveling from other cities, they can get everything [conveniently] on WeChat. You can enter [the show] through WeChat but you also have this very nice [paper] invitation, and we need to do both,” Pavlovsky said.

“The show is a very important context to introduce them to the energy of the brand, but the talks and all the things we are organizing before and after the show are becoming more and more important to engage local customers, the press, to have an understanding of what the brand is today,” he said.

The after party featured performances from electric duo Lion Babe, Chengdu-native rap group Higher Brothers, and a bit of pop-and-locking from Chan. Chanel guests could chat up fashion influencers Han Huohuo, Mr. Bags, and Leaf Greener, models Liu Wen and Ming Xi—or another popular option was the photo studio, where there seemed to be a permanent line all night to get professionally-taken portraits that no doubt were headed for social media.

The day after the runway, Chanel ambassador Caroline de Maigret and Japanese fashion writer Tiffany Godoy met with clients for hands-on styling sessions aimed at nurturing wardrobe confidence. “The idea was to choose three pieces and develop it three different times,” de Maigret said, pointing out the mannequins in the room which had been styled for various settings–work, a date, seeing friends.

It was also an opportunity to learn about the house, no matter how wacky the question.

“One person asked if I was with Karl. If he was my boyfriend,” de Maigret shared, referring to Chanel’s long-time creative director.

MORE: Karl Lagerfeld: In Their Own Words >>

A night out at Chengdu club CC Party had her notice a fondness for leggy looks. “Lots of girls wearing shorts, that’s the sexy parts they were showing,” she said. De Maigret also picked up on a “freedom of spirit”, adding that Chinese style daring has overtaken even the Japanese in terms of avant-garde looks.

“Japanese will be more into structures, will want to build structures. Here it is more about being free to do whatever you want…they are much more risky and yet always very elegant and strong.”

“In France there is so much history, everything already has associations,” Godoy observed.

De Maigret nodded, “Here you have the freedom of reinventing yourself, which is cool because it’s more free.”