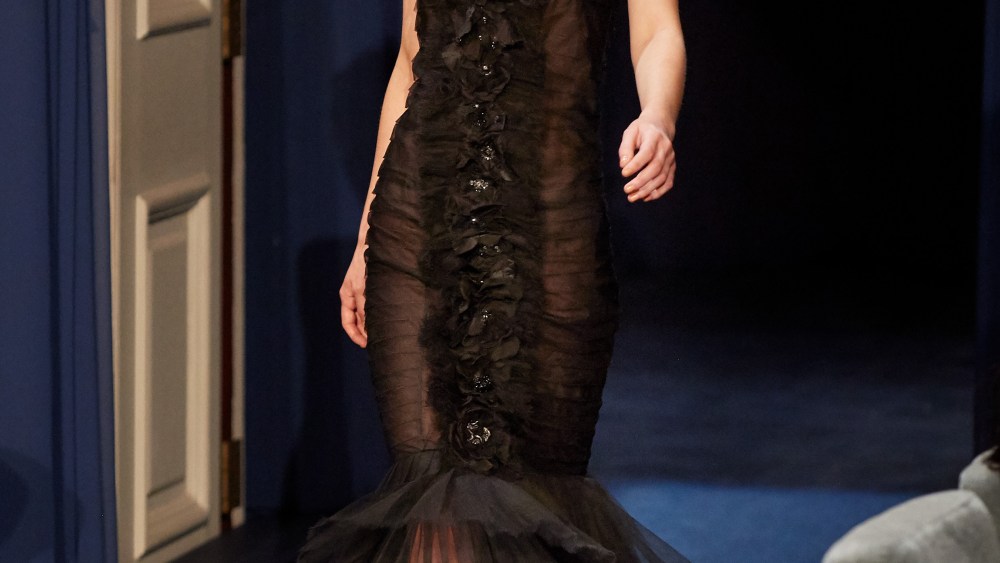 TOKYO — Earlier this month, Chanel brought Greece to Paris with its cruise collection, staged with a replica of the Temple of Poseidon as the backdrop. On Wednesday, it brought Paris to Tokyo.

The fashion house transported its Paris Cosmopolite show, the Métiers d’Art 2017 collection, to the Japanese capital, bringing many of the famous faces that appeared in the original show to the Tsunamachi Mitsui Club.

A baroque structure built in 1913, the club was transformed to recreate the atmosphere of the Ritz hotel, the show’s original venue, including curtains galore in the signature Ritz blue.

Lily-Rose Depp opened the show, and Selah Marley, Sistine Stallone, and Nana Komatsu took turns on the catwalk, too. Actress Ellie Bamber took twirls as she turned one corner and let her hand linger on a chair as she glided past guests.

Marley dubbed the opportunity to walk again in Tokyo “dope”.

“I was so honored to be picked for this show as well,” she said. It was her first time in the city and she was intent on picking out gifts for all her younger siblings. “Maybe I’ll go adventuring tonight, the crazy little bird that I am.”

Model Tao Okamoto watched from a sofa as guests were served canapes and Champagne. Based in New York, the Tokyo native was happy to have an excuse to come home, though she said she didn’t miss the catwalk.

“Nope,” she said decisively. “I still get to do photo shoots, so it’s a good balance.”

Nowadays, Okamoto is focusing more on acting with parts in four movies coming out, including “Manhunt” directed by John Woo.

“Nocturnal Animals” star Bamber, modeling the same bejeweled Chanel gown she wore to the Vanity Fair Oscars party (it was a favorite look she’d requested) said she’d been spending more time in Asia in general, and had celebrated the past Christmas in Taiwan while shooting the film “Taipei.”

“I’m desperate to go back,” she said. The ingénue said she would appear in Disney’s “The Nutcracker and the Four Realms” and dark comedy “Extracurricular Activities” slated for release next year.

Japan has been receiving a lot of love from the big fashion brands lately. The Chanel event was staged just two weeks after Louis Vuitton traveled to Kyoto for its cruise show.

Bruno Pavlovsky, Chanel’s president of fashion, said the Japanese market, which had been flat, is now returning double-digit growth for the brand.

“It’s quite good and we’ve not seen this growth for quite a while,” he said. “[With local customers], we were flat and it started to grow again. It’s very positive. On top of that, we have all the tourists, Chinese tourists.”

The Japan market is considered mature–Chanel first opened a boutique there in 1974–and consumers have embraced Chanel’s ready-to-wear business, a key priority for the brand.

“If I look at Japan 15 to 20 years ago,” Pavlovsky said, “it was more a market about accessories, bags obviously, small costume jewelry such as earrings, brooch and whatever. We’ve seen a change, an evolution from this, if I may say, easy-access pieces to more sophisticated pieces including ready-to-wear.”

In addition to restaging the show, the brand brought Caroline de Maigret to meet customers for styling sessions.

“We have a strong customer base for ready-to-wear and that’s really important because ready-to-wear is everything for Chanel. Our DNA is about fashion,” Pavlovsky added. “We can sell tons and tons of bags. Thats not the objective. The objective is fashion and luxury.”

Claudia D’Arpizio, director at Bain & Co.’s fashion and luxury practice, noted that, “Japan has always been on the radar for luxury brands, not only from a business perspective — being a key ‘true’ luxury market and Japanese consumers accounting for more than 10 percent of [the global] market — but also as a thriving source of inspiration, given its tradition, history and heritage, which highly appeal to luxury brands.”

Japan is “proving to be a valuable location and platform, almost as important as key fashion capitals such as Milan and Paris in terms of global audience coverage,” D’Arpizio said.

Chanel plans to reopen its second flagship in Tokyo, located in Ginza Namiki, in mid-November. The store, which covers an entire building, has been closed since January 2015 for a renovation.

While Japan is a mature market, Pavlovsky said he sees Chanel at just the beginning of its development in China. Though the brand entered the Chinese market two decades ago, Chanel only has 10 fashion boutiques in the country, and has much more room to expand, he said.

Globally, Pavlovsky was upbeat about the outlook for the coming year. The overall luxury industry was forecasted to grow 4 to 5 percent, he noted, saying that his goal was for Chanel to beat that.

It was yet unclear whether the Manchester terror attack would have an impact on the house’s London business, Pavlovsky said, but he was beaming when he talked on the result of the French election.

“We are very happy to have Mr. Macron as the new president of France,” Pavlovsky said, noting that his wife Brigitte Macron is “a friend of the brand.”