Chanel: “I just came in the way you people come in. I can’t believe it!” Linda Evangelista said, expressing sympathy to an editor for what the fashion flock must sometimes go through to get into a show. Like everyone else in... 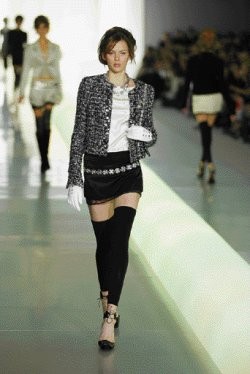 Chanel: “I just came in the way you people come in. I can’t believe it!” Linda Evangelista said, expressing sympathy to an editor for what the fashion flock must sometimes go through to get into a show. Like everyone else in the audience, Linda had negotiated the door debacle at the Carrousel du Louvre before settling into her seat to watch Karl Lagerfeld’s fall show for Chanel.

But it was well worth the struggle. Lagerfeld called his collection White Light, a name with an outer-spacey ring. His long, two-part silver runway divided by a smooth, underlit bunny hill of a dome seemed to point to the future in that Sixties kind of way. But when Karl thinks double-C, it’s not about Cardin and Courrèges. To him, those initials mean one thing: the house that Coco built — and that he not only saved, but also has managed miraculously to keep competitive and au courant season after season for 20 years. Lately, he’s been on such a roll that retailers have noticed a surge in young women smitten by the Chanel mystique, and on the prowl for that glorious first jacket.

The collection Lagerfeld showed on Monday morning should have them rushing in for numbers two and three — along with their best friends, unless they can’t handle the competition. What was especially appealing about this show was that, unlike those moments when Lagerfeld has played up the crazy kid stuff, this one retained a sense of elegance, along with that vague sense of the Sixties and a bit of rock chic thrown in.

Lagerfeld showed jackets galore, in suits or with tiny skirts, sometimes over a touch of lace. He worked in some schoolgirl collars and leggings, even leather ones to turn his good girl just a little bad. He mostly focused on a palette of white and gray, and did indulge in a patterned moment, and while some little feather-trimmed numbers were charming, the graphic sweaters felt out of sync.

But no matter, because there was so much to love, including the skiwear — only hinted at here. But it was a big hint, because Lagerfeld recruited the Van Ravenstein family — Anna, brother Noel and mom Pat Cleveland — to show it off. And if Pat works the slopes the way she still works the runway, look out ahead.

Evening was low-key but sexy. And guess what? Lagerfeld loves the little black dress — very little — accessorized with cozy mittens on a string. Because why should a girl be cold when she looks so hot?

Louis Vuitton: Marc Jacobs knows his way around a retro theme — everybody knows that. Season after season, he has worked various references into remarkably beautiful collections, both at Louis Vuitton and his own house in New York, collections that have solidified his position of influence and as a favorite of the young-and-cool set so sought after by designers of every ilk.

For fall, Jacobs shifted his attentions from the Seventies undercurrent that has most often fueled his work to the Sixties — an interesting and odd choice, since Miuccia Prada developed the idea so thoroughly last season. But Prada doesn’t hold a copyright on the decade and Jacobs, like so many others this season, had every right to plunge in.

That said, in the Vuitton collection he showed on Monday, the designer’s exact message, save for a yen for the work of Cristobal Balenciaga and Pierre Cardin, was difficult to decipher. Make no mistake, many of the clothes were beautiful, impeccably made and packed with those dressmaker details that have become a hallmark of Jacobs’ work. But their studied precision and spacey warrior motif often sent them into a retro world too far away from our own; for all their intrigue, clothes this stiff just don’t make a great deal of sense today. There was a tough edge to Jacobs’ futuristic look, and at times, an uncharacteristic trickiness, too. Split-level hemlines, with skirts and dresses cut short in the front and longer and flapping in the back, just didn’t fly.

Still, the most wearable looks — the pale gray mini suit with graphic seaming or the witty, graphic furs — will send Vuitton fans into orbit. And the most elaborate pieces, trimmed or encrusted with plastic baubles and bubbles, made a strong case for Jacobs’ newfangled decorative effects.

Despite the collection’s problems, it indicated that Jacobs is clearly not content to rest on his laurels. He wants to continue to push himself to higher heights, and that’s to be lauded. After all, flying high is how you get to the moon.

Yves Saint Laurent: If the past couple of weeks are any indication, there ain’t no mountain high enough to divert Tom Ford’s razor-sharp focus when he’s designing a collection. Or two. Because despite all of the rumors about a possible Domenico de Sole-Tom Ford exit from Gucci Group, and having told WWD that without a guarantee of autonomy from PPR chairman François Pinault, he will leave when his contract expires next June, on Monday night, Ford turned out his second stellar collection of the season.

It was a swooner. One might even call it Supreme, as in Diana Ross, who inspired the clothes and whose greatest hits trilled from the soundtrack. This was Ford playing to a woman the way he wants her to always be — in perpetual heat, at her done-up, sexed-up best. He flashed backward to that good old Seventies heyday when Studio 54 thrived, sex was limitless and, unlike the norm on runways today, there was more than one way for a disco diva to do her hair and makeup.

Ford dressed his Dianas in colorful, flouncy, tiered dresses under small velvet jackets or fur stoles, both closed with a wide satin ribbon. He work in jade green, red, deep purple — the colors of provocation, especially in sensuous satins that sometimes looked a little less than luxe, even cheesy. But then, refinement was not exactly the point.

Otherwise, Ford would not have spent so much time lingering on the possibilities of boudoir chic, as often a hint of lace peeked out from above the neckline of a dress. And sometimes, he seemed to forget about the dress altogether, sending his girls out in what appeared to be layers of lacy lingerie — the kind that brings out her inner slut. (And let’s face it, even the most pathetic wallflower has one, and longs to channel her now and then.) Nor would he have dared to show everything with fishnets and the most wonderfully flagrant shoes — jewel-toned platforms with glittering Lucite heels.

For those times when she has to get dressed, she’ll feel plenty sexy in skintight leather pants with lace hip circles. And, when she gives in to a momentary yearning for overt elegance, Ford provided what might just be the coat of a very strong coat season — a gutsy white number with a grand, fluid ruffle down the front.

After the show, François Pinault made his way backstage and gave Ford a congratulatory kiss. It remains to be seen whether circumstances will soon force the two to kiss goodbye. Or if they will Stop! In the name of Gucci Group.