In Great Neck, N.Y., during the early Sixties, a well-intentioned high school track-and-field coach required his runners to engage in community service. As such, David Yurman found himself spending most Saturdays at an outreach center, working with... 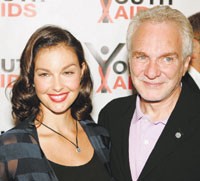 In Great Neck, N.Y., during the early Sixties, a well-intentioned high school track-and-field coach required his runners to engage in community service. As such, David Yurman found himself spending most Saturdays at an outreach center, working with at-risk and disabled youth.

“It was tough to get up so early,” he recalled. But the requirement instilled in him a lifelong commitment to philanthropy.

When Yurman’s jewelry company found its footing in the early Eighties, he was able to contribute more than time to his pet causes. At trunk shows, Yurman invited his retailers to identify local charities to cosponsor and benefit from the event. A slow trickle of thousand-dollar donations has become a steady stream of funding, and now, Yurman refuses to commit to a public appearance unless a charity’s name accompanies his on the billing.

With his wife, Sybil, Yurman eventually formalized a career-long pattern of giving with the establishment of the David and Sybil Yurman Humanitarian and Arts Foundation in 2001.

Composed of a rotating board, the foundation meets quarterly to determine the benefactors of its largess. But long before the creation of an organization, the civic-minded Yurmans made a habit of responding to social crises.

In the Eighties, they watched as the downtown arts community they had helped forge became ravaged by AIDS.

In recent years, the foundation has helped fund the AIDS Community Research Initiative of America, a national effort to promote AIDS research and education. For the effort, David Yurman began designing limited-edition Angel pins sold at Neiman Marcus locations and his own boutiques for $100. Since their creation, the pins have raised upward of $200,000 for organizations such as the Elton John AIDS Foundation and Youth AIDS.

The latter — for which Ashley Judd is the global spokeswoman — will be the foundation’s paramount initiative in 2005.

Locally, the foundation seeks direct interaction with communities around the country in which the company has a strong retail presence. During the opening of the David Yurman store in Bal Harbour, Fla., the foundation contributed $25,000 to the City of Hope, a cancer and terminal diseases research organization targeting Latino communities in the Miami area and chaired by singer Gloria Estefan.

Given that David spent his formative years as a sculptor and Sybil trained as a painter, the foundation remains deeply committed to the visual arts. In Houston, it underwrote the Contemporary Art Museum’s 2004 Black and White Ball to benefit the museum’s annual giving fund. In New York, the brand cosponsored the Frick Collection’s sixth annual Young Fellows’ Ball. When a group of artists in El Paso approached David Yurman about their dream of building an arts center, he offered up the necessary resources.

“At that time, we didn’t have that much money to give,” he said. “But that to me was more important than some of the bigger numbers.”

The numbers in question have totaled well over $1 million dollars in the last 25 years. Yurman explained this near-fanatical commitment to giving by saying, “I’m from a good Jewish family. Giving back wasn’t an option, it was required….By doing these things, by being involved in the people who need you, you’ve just given something significant to the world. Otherwise, I’d just be making jewelry.”