Donna Karan is getting ready for a major garage sale. The designer has rummaged through 35 years' worth of her belongings and gathered more than 2,000 items... 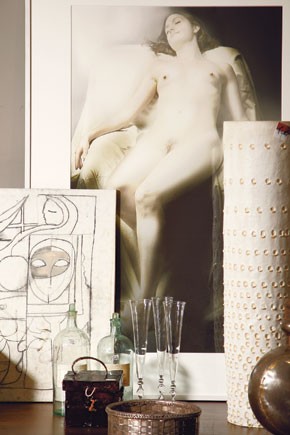 NEW YORK — Donna Karan is getting ready for a major garage sale.

The designer has rummaged through 35 years’ worth of her belongings and gathered more than 2,000 items to sell in the name of charity. There are racks of couture gowns, shoes, handbags, jewelry, photographs, sculptures and even the bed she shared with her late husband, Stephan Weiss.

The items, many of which are from the Donna Karan, DKNY and Urban Zen collections, will be on sale March 14 and 15 at the Stephan Weiss Studio at 711 Greenwich Street here. All proceeds will benefit Karan’s Urban Zen Initiative, a program the designer started last year to raise awareness and funds for some of her passions: wellness, ranging from patient advocacy to marrying Western medicine with alternative healing methods; preserving cultures, particularly in Africa, and empowering children. Pieces at the sale will range from $20 to $2,000.

“It was 35 years of collecting and shopping all over the world,” Karan said, sifting through the racks. “Before I knew it, I was able to fill a warehouse. It just got out of control.”

For any designer looking for inspiration, Karan’s sale is sure to be a treasure trove. There’s a black gown with white cuffs worn by Barbra Streisand, signature pieces from Karan’s first collection as a designer and vintage pieces from her personal inspiration library.

“I’m not getting rid of this, are you crazy?” she said, pulling out a champagne-color silk fabric swatch, embroidered with tiny flowers and birds. “There are so many new concepts on these racks, I can’t possibly part with every single one of these things.”

But, she said, for the most part, she will let them go.

“See this dress? I bought this dress for this color,” Karan said, pointing to a brown panel on a Spanish-style vintage dress. “It’s not about the dress, it’s all about the color. That’s what inspired me.”

And the same goes for many of the home items she will sell.

“This color is great for a print, I bought it for the color for a men’s suit,” Karan said, pointing out a small gray and yellow pottery bowl. “It’s like that with a lot of things. I have a pair of shoes I bought not because I loved the shoes, but I loved the linings in the shoes. I once gave a rock I found on the beach to my designers and told them to make a print out of it.”

“It will be interesting to see what happens when they are seen through a new eye,” she said.

Karan said she would like the sale to lay the foundation for annual private warehouse sales that would include personal items from other designers as well as her own.