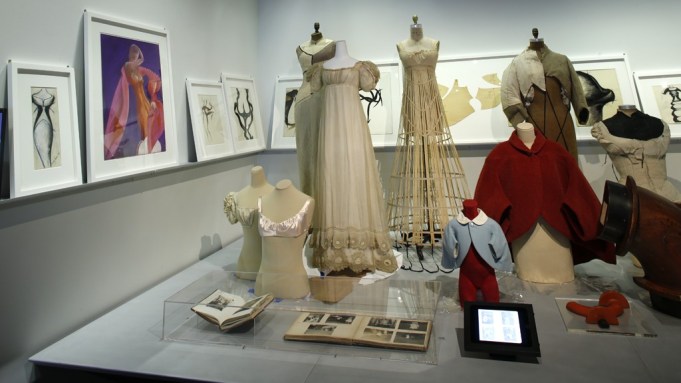 Who is Charles James? It’s a valid question, one that most people outside of fashion — and many within — wouldn’t know how to answer.

This will change Monday morning when the Metropolitan Museum of Art’s Costume Institute unveils “Charles James: Beyond Fashion” in conjunction with the ribbon cutting, by First Lady Michelle Obama, of the Anna Wintour Costume Center, within which the lion’s share of the exhibition is housed (the special exhibition galleries, not directly connected to the new center, display the rest).

Open to the public from Thursday through Aug. 10, the exhibit provides an extensive survey of James’ sculptural work, making a statement for his strong cutting techniques by juxtaposing garments with three-dimensional animations of their construction, as well as innovative ways to spotlight his details.

“Everyone says, ‘Why is James not remembered?’” said Harold Koda, who curated the exhibition with Jan Glier Reeder, during an exclusive walkthrough Thursday afternoon. “In his lifetime, he was very lauded and celebrated, but many of his pieces were given directly to the Brooklyn Museum at his urging of clients. He felt his designs should be used as a reference and teaching tool.”

RELATED STORY: The Met Ball — In a Tizzy About Tails >>

The special exhibition galleries, accessed via the Greek and Roman galleries, make that point nicely. In the area, the curators focused on the more familiar James — i.e., his elaborate gowns as demonstrated in the iconic Cecil Beaton photograph on display. Here, visitors will find 15 of them, the entrance marked by a suspended replica of James’ butterfly dress. As many of the designer’s pieces in the museum’s collection were donated by Millicent Rogers, her portrait, by Bernard Boutet de Monvel, hangs adjacent to a room of James’ muslin forms.

“When you go into the [special exhibition galleries], there is the survey of 15 of his gowns, primarily from the post-[World War II] period with one exception,” Koda noted. “You have this romantic view, with an analytical tool that Diller Scofidio + Renfro designed for us, with digital media analysis that conveys information, but engages you with the gown via light pointers.”

Reeder added, “James is the perfect person to do this with because his construction techniques are so idiosyncratic and genius.”

Descending the stairs to the new Anna Wintour Costume Center, visitors will find a large image of James looking through a crinoline cage, actual recordings of his voice emanating from speakers. At the Lizzie and Jonathan Tisch Gallery, several of the dresses and coats come with robotlike cameras that film the garments from multiple angles and then show them on large screens. Animations of how the fabrics were manipulated to come together in one piece add to the experience.

The Carl and Iris Barrel Apfel Gallery displays pieces of James’ personal archive, from scrapbooks to photo albums, a popular puffer jacket and even a baby Dolman jacket he created when his son Charles Jr. was born.

“This is the tiniest tip of the iceberg, he kept everything,” Koda said. “He was a hoarder. He kept receipts, copies of every letter.…This is the room where I think everybody will get a sense of the wildness of his imagination.”

As Reeder put it, “This room represents every period if his life, starting from the scrapbook of his early life then moving through all the way to the end, like this video [of a retrospective fashion show] from 1969. It represents both process and design.”

Both curators hope visitors will walk away with a new appreciation — even a first one — for James.

“As [Cristóbal] Balenciaga once said, James is the greatest American couturier and the only designer in the world who has taken an applied art and made it art,” Koda noted.

This is the first exhibition after the Costume Institute complex has gone through a $40 million redesign and two-year renovation. Monday’s benefit will be chaired by Aerin Lauder, with Bradley Cooper, Oscar de la Renta, Sarah Jessica Parker, the Tisches and Wintour as cochairs.