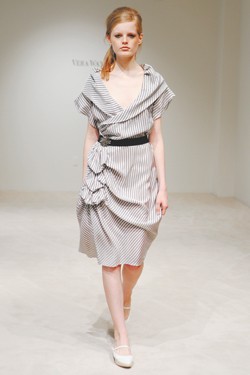 NEW YORK — Frida Giannini made a return to her relatively young roots at Gucci’s second New York cruise show at Milk Studios. The Flora print-filled collection hearkened back to the designer’s original ethos of a sweeter, not-so-aggressive brand of sexiness. Recast in monochrome, the flowery print adorned dresses — both girlish, lace-trimmed minis and boho-chic, tiered maxis — as well as tailored canvas jackets, and Giannini’s first love, bags and shoes. The designer also dug into the archives to unearth yet another print — this one with a graphic, almost cartoonish dolphin motif that dates to the late Seventies. Called the Delfini, it tied in well with the crisp, nautical theme Giannini wove into the show. In comparison with Chanel and Dior’s New York extravaganzas, it was a relatively small-scale production. But in the spirit of grand statements, the company commandeered a billboard on 10th Avenue with its logo on a Flora background and also offered a select group of international editors and retailers the option of watching a live Webcast.

Meanwhile, at Vera Wang, her 250-piece combined resort and pre-spring collection was “all about that dance attitude, about showing and revealing,” Wang said. Inspired by the beauty and body awareness of dance, her childhood pastime, Wang layered fabrics and mixed degrees of color and texture. Her sheer dress, dyed gray fading to black, for example, suggested lightness, but not enough to float away as it was appropriately weighted down by a chic, long cardigan — equal measures of ease and coziness. Resort pieces featured fresh, clean grays, and a white-striped seersucker showed up on dresses and blouses high on volume.