WWD breaks down the lineup of fresh names and labels for all those overbooked retailers and editors.

By Meenal Mistry and Sarah Taylor on September 10, 2005
View Slideshow 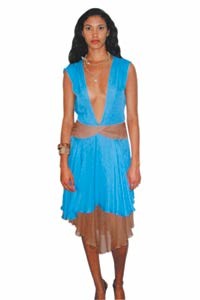 Is it us, or do new designers multiply like bunnies every season? Here, WWD breaks down the lineup of fresh names and labels for all those overbooked retailers and editors.

Pedigree: Nary Manivong, 23, spent most of his teenage years homeless, living on the streets of Columbus, Ohio. Nevertheless, when he was 17 he held his first runway show at a local nightclub. (Manivong lied to the owner, telling him he was 21.) He then moved to New York, enrolled in a summer course at FIT and met John Van Deilien, a private partner who agreed to invest in his line, which is now in its third season.

First time out? He made his New York debut last season.

Any sales? Only private clients.

What to expect: A small presentation of nine looks, done mostly in silk and bright colors. “This collection is inspired by a song called ‘Flower,'” says Manivong. “Flowers should bloom again because to bloom is to give new life. I want to give new life to women and also to myself, as a designer.”

Pedigree: Christian Stroble and Sarah Spratt, both 25, met while attending FIT. They launched Eventide for spring 2004 after Spratt closed her two-seasons-old eponymous collection.

First time out? The duo’s fall 2005 collection was included in the Gen Art presentation last season.

Any sales? I Heart and Seven, both in New York, as well as Factory People in Austin and South Willard in Los Angeles. The collection is also available at several Tokyo boutiques.

What to expect: About 25 pieces, inspired, according to Stroble, by women from the silent-film era. “This collection is a bit dark, but still playful and with a few punches of color,” he says. “It’s like Wednesday Addams grew up and moved to Paris.”

This story first appeared in the September 10, 2005 issue of WWD. Subscribe Today.

Pedigree: Puerto Rican-born designer Lisa Thon graduated from Parsons in 1991, then returned to the island. She then started her line, opened her own store and a fashion design school, too.

First time out? She has shown during San Juan’s Fashion Week, but this is her first time in New York.

Any sales? The line is sold at several Puerto Rico-based stores such as Asi Boutique, as well as her own store.

What to expect: About 60 pieces in mostly chiffon silks and linens, as well as a few swimwear looks. “The collection is very bohemian,” says Thon, “with a lot of details, bright colors and beading.”

First time out? Yes, this is their debut collection.

Any sales? Only private clients so far.

What to expect: Forty looks in a palette of mostly navy and beige. “We start out by thinking of what we would want to wear,” says Hedaya. “Everything is beautiful but has a practical, comfortable side.”

Pedigree: David and Philippe “Blond” (they’re in the process of legally changing their last names to Blond) have no formal design backgrounds. Before launching their label for fall 2005, David, 29, was a window dresser for stores such as Macy’s in New York and Saks Fifth Avenue in Bal Harbour, Fla., while Philippe, 21, was a makeup artist at MAC.

Any sales? The line is sold at Patricia Field’s Venus Hotel in New York, as well as to a private client base.

What to expect: Daywear with an evening sensibility. “This collection was inspired by the fabulously bad, but wickedly chic women of the James Bond movies,” says David. “You will see a lot of beaded gowns which make great entrances, but even better getaways.”

Pedigree: British expats and high school friends David Neville, 29, Nathan Bogle and Marcus Wainwright, both 30, started the hip denim-based collection for men last spring. For fall, they introduced a small collection for women. Bogle, a former model, and Wainwright, a former dot-commer, spent three years apprenticing in New York to learn the art of patternmaking, tailoring and grading. “We really want to embrace a lot of aspects of British tailoring,” says Bogle. Neville, once an investment banker, handles the finances.

Any sales? Both the men’s and women’s lines are sold at Barneys New York and Steven Alan in New York; United Arrows in Japan; Louis of Boston and Matches in London.

What to expect: Fifteen women’s looks that Bogle says capture the spirit of the trio’s friends and girlfriends, particularly Neville’s, who is currently dating makeup artist Gucci Westman. (He also used to date Sienna Miller.) “It’s that independent, professional woman who can turn herself out for night, but then maybe likes a looser jean,” Bogle adds.

Pedigree: Prior to launching his own line in 2000, Parsons grad Derek Green, 32, served as head designer for Tommy Hilfiger’s Tommy Girl line. Before that, Green, a Baltimore native, was the head designer at American Eagle Outfitters, where he was responsible for the women’s woven and sweater divisions.

Any sales? Derek Green is sold at 300 stores, including Fred Segal and New York-based Atrium.

What to expect: Tropical colors such as turquoise, coral and lime, as well as cheetah and zebra prints. “This season, I’m inspired by the tropical temptress — golden skin, seductive eyes, sensual curves and flowing hair,” says Green.

Pedigree: Alice Temperley’s Temperley London label, which she launched in 2000, was an immediate success. Temperley, a St. Martins and Royal College graduate, opened her first store in London in 2001, followed by a New York boutique two years later. Her third post, in Los Angeles, is slated to bow in October.

First time out? Temperley London’s first London Fashion Week show was for fall 2003, but this season marks its New York debut. “We decided to move our show because New York offers a great deal more exposure to international press and buyers,” says Temperley, 30.

Any sales? Temperley London is available at more than 150 stores worldwide, including Bergdorf Goodman, Selfridges and Lane Crawford in Hong Kong.

What to expect: Embellishment, new fabric treatments and bright prints, as well as an expanded range of day clothes. “The theme of the show is ‘Midsummer Night,'” says Temperley. “Its influences range from Shakespeare’s works to Peruvian color schemes, which will be underlined by special lighting effects that will create an enchanted forest feel.”

Pedigree: After graduating from the Rhode Island Island School of Design in 2001, Stanley Adams, 26, began working on his line, which he launched for fall 2004. Today, he is based in New York.

First time out? This is his third time showing during New York Fashion Week.

Any sales? By appointment only.

What to expect: About 12 items, done mostly in silk with beading and sequins. “My pieces are very sophisticated and elegant,” says Adams. “It’s the wardrobe of the Fifth Avenue lady.”

Pedigree: Georgia native Amy Smilovic, 37, started Tibi in 1998 while she was living in Hong Kong. Two years later, she moved her company, which is now best known for its playful mix of feminine, colorful looks, to New York. Before she began designing, Smilovic, who graduated from the University of Georgia with a degree in advertising and communications, worked in marketing and sales at American Express.

First time out? This is Tibi’s first fashion show.

Any sales? The line is carried in 20 different countries at more than 200 stores such as Neiman Marcus and Hong Kong-based Lane Crawford.

What to expect: Lots of prints and bold colors, as well as more dresses than Tibi’s past seasons. “We are in love with long dresses that are worn for day, and little mini dresses,” says Smilovic. “Everything is one extreme or the other — full sleeves or no sleeves at all.”

Pedigree: Jenni Kayne, who turns 23 on the day of her show, has been creating buzz at Los Angeles Fashion Week since she first appeared there with her fall 2003 collection. “Coming to New York is the next step in my business,” says Kayne.

First time out? This is her first New York show.

Any sales? Nordstrom, Neiman Marcus and small boutiques across the country.

What to expect: Fifteen to 20 looks inspired by the Sixties and Seventies beach-club culture, photographed by Slim Aarons. Kayne’s past shows had the likes of Dustin Hoffman, Owen Wilson and Robert Downey Jr. in the front row. But Kayne says that this time, “It won’t be like L.A.”

Pedigree: Originally from Wilmington, Del., Nathan Michlin, 29, graduated from Philadelphia University with a degree in fashion design. He then moved to New York, where he became an assistant designer at Alfred Angelo, a bridal and special-occasion label. His first Boutique Oooh La La collection (“I wanted a fun, girly name,” he says) debuts this week.

What to expect: About nine sportswear looks that Michlin describes as “elegant, yet casual.” The collection of silk, linen and cotton pieces is mostly in creams and whites, with red and green accents.

Pedigree: Francisco Chaydez, 30, used to be one half of the design team behind Sandoval. He split amicably with designer Michael Carbaugh, who is still showing under the Sandoval name, and is now going at it alone. Chaydez, a San Francisco native, says his forte is tailoring pieces to “maddening perfection.”

What to expect: A small collection, almost entirely in black and white, of sharp jackets and vests, wide-legged pants and unusual skirts.

Pedigree: Kai Kuhne quite famously (or infamously, depending on your point of view) subtracted himself from the kooky downtown quartet As Four last season.

Any sales? Not yet, but Kuhne says that retailers have requested appointments.

What to expect: Kuhne will show 24 looks that dispense with the conceptual work he did with As Four. “I’m focusing on classic garments with classic construction — sailor pants, men’s tuxedo shirts,” he says. “It has an old-world feel, but it’s really modern.”

Pedigree: Athens-based eveningwear and bridal designer Vlassis Holevas, 37, who calls himself the “Robert Cavalli of Greece,” says that he’s been designing for 20 years. He also dressed Petra Nemcova for the Rock Fashion Awards in London.

Any sales? Neiman Marcus carries the label’s dresses, and Holevas has his own store in the tony Athens neighborhood of Kolonaki.

What to expect: The collection of about 60 looks is in a palette of black and white, and features his signature medium of beaded and hand-painted fabrics.

Pedigree: Designer Stephanie Schur, 28, launched her vintage-inspired collection for spring 2004, and it quickly became a hit with Los Angeles stylists such as Christina Ehrlich, and such stars as Penelope Cruz and Rosario Dawson.

Any sales? Yes, at Fred Segal where she once worked the sales floor.

What to expect: About 18 looks in sorbet colors, with a touch of Twenties inspiration. There may be a couple of red carpet dresses as well, but Schur says she is focusing more on day wear.