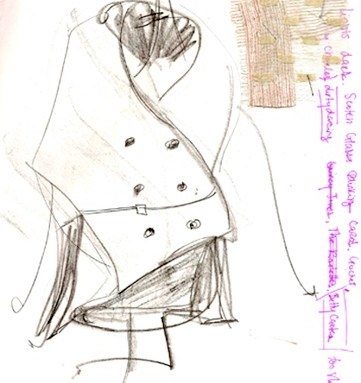 To read the papers — this one included — with their stories of fashion’s recession casualties, one would think the number of new entrants in New York Fashion Week would be slim. Think again. From a duo fresh out of Parsons to Francisco Costa’s protégé, here are some of the most promising new names.

“Gossip Girl” features a never-ending parade of designer labels, from Jenny’s Valentinos to Serena’s Vena Cavas. But Lorick’s designs appear on the show as more than eye candy. As a stand-in for the Eleanor Waldorf line, they’re a major plot point. This season, Lorick has cooked up 24 looks that are pure 10021, like high-waisted silk and linen shorts and cocktail dresses in shades such as “seared-tuna pink.” And, OMFG, Blake and Leighton will be there!

The designer named her line after her grandfather, a musician and composer. “I think of a whole collection as a kind of composition,” she explains. “It’s kind of the same approach to the way he would compose.” Since her résumé includes stints designing eveningwear at J.Mendel and Reem Acra, it’s no surprise that her line features dramatic evening pieces such as a chiffon bustier dress and column gowns aplenty.

As seniors at Parsons The New School for Design, these two were neck and neck for the 2007 Designer of the Year award (Ochs won, and Cushnie was the runner-up). Now, instead of being competitors, they are collaborators with a fledgling line. Though they have their aesthetic differences, neither is a fan of what Ochs calls the “loose, rolled-out-of-bed look.” Perhaps that’s why their muse this season is the compulsively neat Patrick Bateman from the novel “American Psycho.”
“We really related to the character,” Ochs explains.
“Not the killing part,” Cushnie is quick to add.
The 24 looks include a nude, plastic-coated silk trench and minidresses complete with body-revealing cutouts and slashes.

Sells at: The line is in its first season, so no stores yet.

“I’m definitely not the designer who’s pumping out skintight cocktail dresses,” says Knapp. Instead, she’s the designer whose quirky prints (this season includes one of the liquor bottles smeared with lipstick traces) have won her an indie-girl following. For spring, she started with the idea of a preteen girl “exploring her mother’s wardrobe and getting into the liquor cabinet.” Oversize blazers and dresses give the lineup of 15 looks what Knapp calls an “experimental trying-on-others’- clothes feeling.”

Some people have all the luck. Munich-born Loeffler worked in the costume department of the Resident Theater there, but found that she “actually missed what fashion can do — that you can actually dress people on the street, not a character on the stage.” After landing in New York in November, she met the designers of Threeasfour through friends and began interning for them. Internships at VPL and Zero + Maria Cornejo soon followed. At her upcoming show, she plans to literally blow them away — with industrial fans that will be strategically placed along the runway, accentuating the movement of the clothes. Loeffler has titled her range of 25 looks in geometric shapes Schwerkraft, German for “gravity.” Isaac Newton would be proud.

Wholesale prices: From $125 for a silk tank top to $350 for a leather jacket. So-called “showpieces,” such as a leather dress with cube-shaped appliqués, start from $500 and up.

Sells at: This is her first season, so no stores yet, but “it would be
great to be in Barneys New York,” she notes.

The stylist-to-designer trajectory has become a bit of a cliché, but for McCall, it seems only natural. “I love playing with clothes,” she reasons. “I did this as a stylist, and [now] I do this as a designer.” After outfitting everyone from Destiny’s Child to Marianne Faithfull and designing for Buddhist Punk and Sass & Bide, she started her own line in 2004. For spring, she’s inspired by scientific drawings of insects, with cocoon and pod shapes showing up in the 30-odd looks.

UNCONDITIONAL: Saturday, Sept. 6, 11:30 a.m to 2 p.m., The Maritime Hotel, 363 West 16th Street
Designer: Philip Stephens
In 1969, John Lennon and Yoko Ono bedded down at the Amsterdam Hilton for their notorious “Bed-In” protest. Almost 40 years later, Unconditional is getting models to do the same at the Maritime Hotel for a presentation that will be conducted au lit. The 30 looks are in organic silk and cotton, adding to the do-gooder vibe.

The husband-and-wife team met while attending Pratt. In 1999, they launched their collection in Korea, where they also found a side gig designing McDonald’s uniforms. Now, they’re taking their showcase of 40 looks to the tents. Every season, the couple collaborates with an artist: This time, it’s Chang Sub Choi, who’s provided drawings of cupcakes with children’s faces (cuter than it sounds).

Wholesale prices: $500 for a silk faille taffeta dress; $450 for a wool-silk zibeline jacket.

Sells at: Shop at Bluebird, London; Beyond 7 Boutique, New York.

One of Bell’s favorite photographs depicts Slim Keith on a hunting trip. She’s sporting a striped cardigan and toting one hell of a gun. “Here’s this delicate woman, nicknamed Slim,” he marvels, “holding a double-barreled rifle.” Bell, who worked at Chado Ralph Rucci, plays with that duality in his 21 looks, including a leather riding jacket with men’s wear-style interior pockets. “I like those masculine touches,” he explains.

Sells at: Last season was sold only to private clients, but the designer is on the lookout for retailers for spring.

Girls love horses. Just look at “Black Beauty” or “Misty of Chincoteague.” Lunsford, who grew up in Kentucky and worked at Ralph Lauren, is no stranger to the equestrian lifestyle. Her 25 looks are inspired by the grace of Lipizzan horses, with pieces such as a harness-style top.

As a transplant to New York from Paris (she moved there when she fell in love with a male model whom she later married), Théallet identifi es with what she calls “borderless fashion.” She envisions a woman who “travels a lot and feels that she doesn’t belong to any culture anymore, because it’s a mix of everything.” Théallet developed her design chops working under Jean Paul Gaultier and Azzedine Alaïa, and even had a resort and beachwear line with makeup artist François Nars. She plans to show 30 looks — expect lightweight cotton and silk frocks with feminine prints.

There aren’t many Bedouins roaming the Upper East Side, but if there were, they’d do well to don a piece from Macqua. Vollmar was inspired by the lightweight ease of traditional Bedouin clothing mixed with the sophistication of the Spence set. Pieces such as an olive green trench and a gathered white minidress may not exactly telegraph that inspiration, but they do give off an effortless chic on which desert and Park Avenue dwellers alike should be able to compromise.

Wholesale prices: From $175 for a simple silk dress to $900 for a very constructed dress.

It’s not easy to please both Tara Subkoff and Francisco Costa. But Louie has covered that ground working both as an intern at Imitation of Christ and in the design department at Calvin Klein. Costa was so impressed with his work that he chose to mentor him as part of Project Protégé, a program sponsored by Australian Wool Innovation Ltd. “He was at all my fittings. It was a real mentor experience,” Louie says. Spring’s 16 looks are
inspired by growing up by the ocean in Santa Cruz, Calif., and thus combines delicate fabrics such as silk faille with neoprene (aka wet suit material).

Sells at: The line is in its first season, so no stores yet.

The name may be unfamiliar to New Yorkers, but OmniaLuo is a giant in Asia, with $25 billion in sales, more than 200 stores in China and a Chinese CFDA award. The brand plans to open stores in the U.S. next year, but until then, New Yorkers will have to be content with 40 whimsical looks, including lace-trimmed Empire-waist dresses.