A model, a doll maker and two tabloid-loving Brits walk into Fashion Week. Not the setup to a cringe-inducing gag, just some of the newbies showing this season. 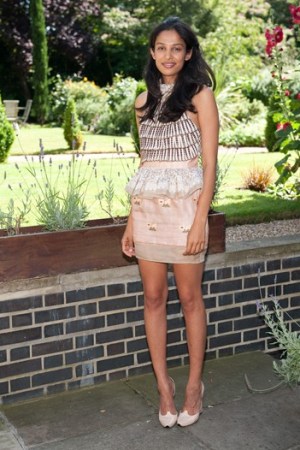 A model, a doll maker and two tabloid-loving Brits walk into New York Fashion Week. No, it’s not the setup to a cringe-inducing gag, just the array of newcomers showing over the next nine days.

SALONI
Sept. 9, 4 p.m. to 7 p.m., 142 West 36th Street.
When Saloni Lodha says, “I’ve always been inspired by India,” it’s hardly a surprise — she grew up there and studied textiles in Mumbai before moving to London to intern at Issa in 2005. In September 2007, she broke off to show her own 10-piece collection at London Fashion Week. For her New York debut, she was inspired by the Persian epic “The Adventures of Hamza,” and, thus, her clothes are for “anyone slightly adventurous.” Expect 14 looks; pieces range from tailored jackets to chiffon-draped trousers to cocktail dresses (her best-selling Alexia frock has been worn by Emma Watson).
Wholesale prices: $115 to $290.
Sells at: Harvey Nichols in London; Muse in Mumbai; my-wardrobe.com.

Next: When he’s not sculpting Robert Pattinson collectible dolls, this designer is sketching dresses >>

ROBERT TONNER
Sept. 9, 3:00 p.m., 173 Duane Street.
When Robert Tonner isn’t at work on pearlescent-skinned “Twilight” dolls (his day job is designing collectible figures), he’s pursuing fashion. Having worked under Bill Blass at Blassport in the Eighties, Tonner says, “I really learned everything I know about the fashion business from him — well, not everything, but the good stuff.” He will show 24 to 30 looks inspired by classic all-American sportswear, but executed in dressier fabrics — a trenchcoat rendered in sequined, embroidered silk shantung, for example. “I’m not as young as the other people out there doing their first season,” the designer admits, “[but] I think there’s something to be said for a little experience.”
Wholesale prices: $150 to $1,500.

Next: A presentation with cameos from an “Arrested Development” star and a trapeze >>

RACHEL ANTONOFF
Sept. 9, 6:00 to 7:30 p.m., Henry Street Playhouse.
“The concept of dress up is really special and great,” says Rachel Antonoff, “You lose that as you get older.” After codesigning quirky label Mooka Kinney for two years, Antonoff started her own line for spring 2009. Now the New Jersey native is gathering her friends (including “Arrested Development’s” Alia Shawkat) at a Lower East Side theater where her great-grandmother used to put on plays as a teen. She’s whipped up whimsical rompers and eyelet frocks; Albertus Swanepoel is providing floral headpieces. And while there are several surprises in store, Antonoff lets slip at least one: “There may or may not be some trapeze action.”
Wholesale prices: $65 to $200.
Sells at: Barneys New York; Isetan in Japan; Frances May in Portland, Ore.; The Violet Hour in San Antonio.

Next: Danceteria-inspired gear from a Patricia Field protegé >>

Sept. 9, 8:00 p.m., Morrison Hotel Gallery.
Nematzadeh was lucky enough to find her muse at age three. As a toddler, “I was a huge fan of Debbie Harry. I was really struck by her image,” she says. After stints with Patricia Field (styling “Sex and the City”) and at Necessary Objects, the Tehran-born designer launched her nightlife-inspired line for fall 2008. This season, she’s showing 23 looks, from tiered dresses to leggings, and focusing on fabric treatments, like holographic foil on leather and airbrushing on georgette. Her inspiration board is stuffed with snapshots from Danceteria’s heyday, when getting dressed up was half the point of clubbing. “It would be great to have people get excited about fashion [like that] again,” she says.
Wholesale prices: From $75 for a T-shirt to $800 for one of the handmade pieces.
Sells at: Patricia Field in New York, 25park.com.

Next: A Calvin Klein model-turned-designer who’s not Kate Moss >>

THE VESSEL. BY LOIS
Sept. 10, 2 p.m., 548 West 28th Street.
A stunner who appeared in the CK One ads with Kate Moss and has walked the runway for Givenchy, Ralph Lauren and Thierry Mugler, Lois Samuels is banking on “basic, comfortable, classic pieces” for her new line — simple silhouettes such as overalls and shift dresses, which smack of Nineties minimalism. A portion of her sales will go to the Manning Boys Home in the designer’s native country of Jamaica.
Wholesale prices: $90 to $250.

Next: Boudoir d’Huitres brings fashion and architecture together >>

Sept. 10, 5 p.m. to 7 p.m., Hosfelt Gallery.
“I always wanted to do fashion, but architecture was my main medium,” says Mimi Plange, who studied architecture at UC Berkeley and fashion at FIDM. “The body now becomes the thing that I’m trying to find the solution for.” Her 25 looks follow that theme of girding the body in structured pieces such as a lambskin and leather bustier dress in shocking chartreuse.
Wholesale prices: $228 to $998
Sells at: Mosaic in Kuwait and at boudoir-dhuitres.com.

Next: At 25, Rita Liefhebber has moved on from modeling to designing >>

RITA LIEFHEBBER: Sept. 10th, 6:00 p.m. to 8:00 p.m., Eaglesnest Studio.
After a modeling stint in her teens and editorial turns as a fashion editor of Flare magazine in Toronto and assisting Lori Goldstein, Rita Liefhebber is ready to wield the scissors herself. Her launch includes model-off-duty bait such as reversible sweat shorts and a wet-look one-shoulder dress designed to look like tar.
Wholesale prices: $100 to $600.

Next: At 19, Andrea Cuomo already has her own line of hip hop-meets-Goth streetwear >>

CUZ LOVE KILLZ
Sept. 10, 7:00 p.m. to 9:00 p.m., Sun West.
A year after graduating from Fashion Industries High, Andrea Cuomo already has her own line of streetwear. The FIT student was interning at Staerk when she met Jacinto Onofre, who became her co-designer. Their 14 looks (seven of them women’s), consist primarily of T-shirts and lightweight cotton jersey pieces, such as a scoop-neck dress. The result is a little bit hip-hop, a little bit Goth — plus some “morbid love symbolism,” as Cuomo puts it, evidenced in graffiti-ed heart and gun prints.
Wholesale prices: $15 to $50.

Next: British cousins who incorporated the gossip columns into their line>>

COPPERWHEAT
Friday, Sept. 11, 1:30 p.m., Maritime Hotel.
Who doesn’t love tabloids? The duo behind Copperwheat has the perfect tribute to that other rag trade. While at London’s Royal College of Art, Ben Copperwheat created a multicolored tartan kilt with a print based on U.K. scandal sheet “News of the World.” “It kind of went into the drawer for years,” he says, but now it’s resurfaced as his “New York Post” print. Ben codesigns with his cousin, Lee Copperwheat, who’s worked at Daryl K and Miguel Adrover. The duo will show 22 looks, seven of them women’s. For the girls, they will offer man-tailored suits — Ben says “women love a really tight, tailored suit” — along with shorts and jersey dresses.
Wholesale prices: From $105 for miniskirts to $350 for a tailored jacket.

Next: A newcomer who counts Marc Jacobs as a mentor and storms as an inspiration >>

RISTO
Sept. 11, 6:00 p.m., Metropolitan Pavilion.
Risto Bimbiloski, who doubles as head knitwear designer for Louis Vuitton men’s wear, says invitees should expect “a classic, old-school fashion show with good models and good music.” He’ll show 32 looks, from shirting to a nylon parka with a print inspired by a NASA photo of a thunderstorm. Having worked for Thierry Mugler and Jean Colonna, he now has the highest praise for his current boss, Marc Jacobs. “He introduced me to Sonic Youth,” Bimbiloski says excitedly.
Wholesale prices: $120 to $400.
Sells at: Bergdorf Goodman, Opening Ceremony, Bird in Brooklyn.

Saturday, Sept. 12, 6:00 p.m., New Art Center.
Ivy Higa was working at a Neiman Marcus in her home state of Hawaii when she happened to see a documentary on Donna Karan. “She’s very focused on quality and dressing [women] to make them feel not only sexy, but comfortable,” says Higa. A relocation to New York and enrollment at Parsons (because it was the school Karan attended) was next. After a yearlong stint as a design assistant at Lafayette 148 New York, she started her own line last fall. For spring, she’s prepared 15 looks, mostly convertible separates — like shirts with adjustable-length sleeves or a jumpsuit, which can be made into a romper — rendered in fabrics she describes as “delicious”: silk-cotton blends, silk charmeuses and georgettes.
Wholesale prices: $124 to $446

Next: A designer who’s bringing a bit of Britain to New York with a tea party presentation >>

MARIA GRACHVOGEL
Sept. 13, 2 p.m to 4 p.m., The Altman Building.
Maria Grachvogel would like her designs to resemble a classic Le Corbusier chair: “It’s interesting, it’s modern, it’s cool. At the same time, it’s completely timeless.” Inspired by Tippi Hedren in “Marnie,” she will show 30 looks, which include pieces such as cigarette pants and shift dresses. In a nod to her native England, she’s serving a proper afternoon tea at her presentation.
Wholesale prices: $250 to $1,000, though prices can go up to $2,500 for special pieces.
Sells at: Her own store in London, which opened in 2001; Rock in the United Kingdom; Fenna in Greece, and Amultaka in Saudi Arabia.

Next: A Parsons grad who was inspired by the gods and goddesses of Santeria >>

FABIOLA ARIAS
Sept. 15th, 1:00 p.m. to 4:00 p.m., AVEnts Studio.
After graduating from Parsons in May, Cuban-born Fabiola Arias took to the library to research Santeria, an Afro-Cuban belief system. She explains, “I was just so fascinated by the imagery and mysticism behind it.” She ended up naming each piece in her 11-look eveningwear lineup after a deity, whether it’s a red coat inspired by fire god Eleggua or a white dress dripping with frayed organza strips in tribute to Obàtálá, goddess of purity.
Wholesale prices: $337 to $1826.

Next: Will McLeod says his line is “not just another Balmain knockoff” >>

WILL MCLEOD
Sept. 15th and 16th, 12:00 to 8:00pm, 379 Park Ave South.
“Not just another Balmain knockoff” is how former Rodarte intern Will McLeod impishly describes his line. His debut capsule collection consists of a mere seven pieces: three tops, three skirts and a dress. Like the Mulleavy sisters, he appreciates surface detail, but in a way that’s “not embellished, not tacked-on, but having clothing literally bloom.” Look for lightweight fabrics like superfine tulle and georgette, and a beachy palette of white, cream, seafoam green and teal.
Wholesale prices: $600 to $11,500.

Next: A Hollywood superagent’s daughter takes on fashion >>

KIMBERLY OVITZ
Sept. 16th, 5:00 p.m. to 8:00 p.m., The Loft at Milk Studios.
That dress. Black, Alaïa-tight, with bondagey, back-exposing straps, it landed on many a starlet and ignited quite the “Who Wore it Better?” battle in the celebrity weeklies. While Kimberly Ovitz is so far best known for that piece, she explains that “the collection this season is less bondage sexy and more fluid sexy.” She’ll show 35 to 40 looks, including organic cotton poplin and cotton jersey wrap dresses and skirts. Having previously worked only in black and white, she’s now taking a dip into (muted) colors like blue and silver.

Next: A lawyer with a cashmere fetish >>

Sept. 17th at 1:00 p.m., The Salon at Bryant Park.
Andrea Karg has a cashmere problem. Both in the sense that she’s addicted to it, and that she’s unhappy with how it’s been treated in the fashion world. When she founded her line in 1993, she felt the fabric was relegated to dowdy twinsets. “I want to really elevate cashmere,” says the former model, who also holds a law degree. While she’s shown before in Berlin Fashion Week, this is her chance to make a splash in New York. To wit, she is showing unconventional pieces such as a cashmere cotton playsuit and hot pants. While the line is cashmere-only, her 24 looks will be shown mixed with latex bras and belts.
Wholesale prices: $69 to $595
Sells at: Capitol in North Carolina; Max in Denver